The Neo-Pagans and Saint Paul

A basic element among the various neo-pagan groupings is their hostile, dismissive attitude towards the person of the Lord, the Prophets, the Holy Apostles and the Holy Fathers, which is fanatical to the point of egregiousness.

It is, however, Saint Paul who is singled out for incredible malice and fanaticism, with all sorts of fabrications being levelled against him. These are motivated by spite, involve the misrepresentation of the historical record and have become an obsession.

We shall now proceed to mention a cross-section of the neo-pagan claims about Saint Paul and comment on them briefly to reveal in a clear manner the hatred of contemporary pagans towards the person and work of Saint Paul. Among the unfounded and defamatory claims of modern ‘devotees of the ancients’ is the attempt by some of them to link the person of Saint Paul to the conflagration in Rome at the time of Nero. 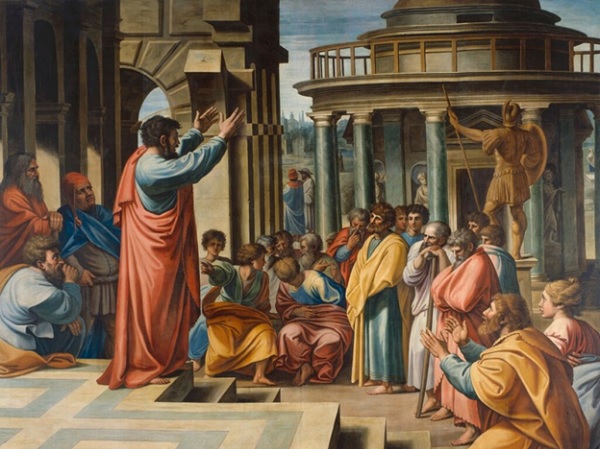 They blithely adopt the slanderous accusations of Nero, who was both schizophrenic and decadent, which were aimed at the early Christians as a result of the  terrible fire of 19/7/64 A.D. This burned the larger part of ancient Rome and Nero used the charges in an effort to prevent the wrath of the Roman people being directed against him. Saint Paul and the early Christians are represented by the neo-pagans as arsonists who burned down Rome.

Literally making up completely non-existent facts, they claim that Saint Paul was involved in the Seneca/Piso conspiracy, an idea that is absolutely false. It is a figment of the imagination. Not a single historical source mentions his involvement in the plot against Nero which was organized by Gaius Calpurnius Piso and was detected in 65 A.D.

As part of the same context, they quote a supposed correspondence between Paul and Seneca. All scholars, however, consider that this ‘correspondence’ represents a body of letters composed in the 4th century A.D. and, as such, is to be treated as apocryphal, forged or falsely-attributed [1]. These falsified texts from the 4th century are presented as being supposedly authentic testimony or proof of the most unlikely assertions.

In contrast to neo-pagan propaganda, we have the true historical facts. These are historical proofs. The first is from the historian Tacitus and is to be found in his work Annales. It is a reference to a widely-held view among the inhabitants of Rome that Nero himself was the arsonist involved in the burning of Rome. Tacitus goes on to say that, in order to smother that view, Nero blames the Christians for the fire [2], in other words, he slandered them.

The true facts, which prove that any attempt to link Saint Paul and the Christians with the burning of Rome, however, are presented by Suetonius, who makes the following relevant point: In fact, on the pretext that he was shocked by the ugliness of the old buildings and the press of people in the streets, set fire to Rome and burned it down: ‘For under cover of displeasure at the ugliness of the old buildings and the narrow, crooked streets, he set fire to the city so openly that several ex-consuls did not venture to lay hands on his chamberlains although they caught them on their estates with tow and fire-brands’ [3].

The neo-pagan  claims which we have presented regarding the person of Saint Paul are evidence of their way of thinking and their fanaticism. Moreover  it is a baseless argument, though proof of a drama. And that drama is simply the delusion under which they suffer: that their fabrications are actually real history.

[1]  See Al. Fürst – Th.Fuhrer – F.Siegert – P.Walter, Der apokryphe Briefwechsel zwischen Seneca und Paulus, (Scripta Antiquitatis Posterioris ad Ethicam Religionemque pertinetia 11), pubd. by Mohr Siebeck, Tübingen 2006 (passim).
[2]  Tacitus, Annales, Books ΧV/44.  [Loeb Classical Library) London 1999, p. 282 in English]. H. Fuchs, Tacitus über die Christen, in Vigiliae Christianae 4 (1950), 65-93.
{Tacitus actually hints that the whole business was set up deliberately: ‘Accordingly, an arrest was first made of all who pleaded guilty; then, on their information, an immense multitude was convicted, not so much [haud proinde] of the crime of setting fire to the city, as of hatred towards people generally’. Apart from the fact that this is an odd thing to accuse Christians of, it’s obviously a trumped-up charge against which there could have been no defense. Tacitus then records the manner of the deaths of the martyrs: ‘Mockery of every sort was added to their deaths. Covered with the skins of beasts, they were torn by dogs and perished, or were nailed to crosses, or were doomed to the flames and burnt, to serve as  night-time illumination, when daylight had failed’. Given the Romans’ gruesome taste for brutal public spectacles, this was clearly meant to distract the ire of the populace away from Nero {WJL]}
[3] Gaius Suetonius Tranquillus, De vita Caesarum. Nero, 38.