‘For when the Lord of the Vineyard Comes, what will he do to those Laborers?

Christ used the image of the vineyard rather than that of any other tree or plant, because he was preparing the faithful to understand that wine, the fruit of the vine, would be given at the Last Supper, so that it would be exactly the same as His blood and so that the faithful would be joined together over the centuries with Him and among themselves. They would be blood relatives, united in His precious and all-pure blood.

In today’s Gospel, Christ foretells His voluntary Passion, and prophecies His Crucifixion, which will be the act of committing the vineyard, that is His Church, into the hands of people who believe in Him and who act as living witnesses to the faith, even to the point of shedding their own blood.

The Lord talks about a certain landowner who planted a vineyard, fenced it off, and erected a press and tower where the laborers who would undertake the care of the vineyard would live. When harvest-time arrived, the land-owner sent his servants to fetch his share of the grapes. But as soon as the laborers saw the servants they beat some, stoned others and killed the rest. The land-owner then decided to send more servants, but these received the same treatment from the laborers. Despite this, the landlord was magnanimous and sent servants once again. The laborers remained uncontrite and behaved in the same way. 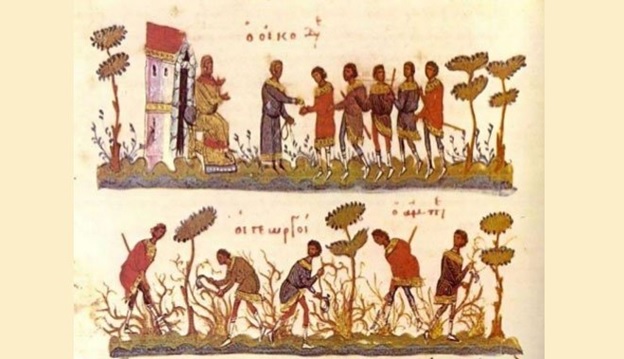 In the end, he decided to send his own son, in the belief that they’d show him due respect. But once they saw him, they said among themselves that here was the heir. They led him away from the vineyard and killed him, so that they would inherit the vineyard themselves.
You wonder at the reasoning and wickedness of these laborers. Instead of being grateful to the land-owner who had had such confidence in them, instead of linking themselves closer to him, they distanced themselves and alienated themselves from him with no justification whatsoever. They became his enemies. They even reached the point of murdering his beloved son.

The ‘laborers’ were the religious leaders of Israel. High Priests, Scribes, and Elders. God entrusted the guidance of His people to them. These were the people who should have been standing ‘before the gates’ and inspiring the people of God to look forward to the coming of the Redeemer, refraining from sin and observing the word of God. The ‘laborers’ went about their lives with no relationship with God until the day the Lord came down to earth. God sent His beloved Son, in the belief that they would respect Him and would render to Him the fruits of the vineyard. But they didn’t respect even the Son, Who requested God-pleasing fruits, because they’d never earned any. Prodigals, publicans, harlots and sinners who repented and sought remission of their sins with tears, because they had saddened God the Father, all entered into the ‘Vineyard’. But those who were supposed to know the Law, the leaders of Israel, were left outside, trapped in their ego and their self-importance. They rejected Him and condemned Him to a humiliating death on the Cross.

After He’d finished telling the parable, the Lord asked those present: ‘What will the Lord of the Vineyard do when He Himself comes?’. What was the right and proper way to deal with those laborers?

‘He will cruelly destroy those wicked men’, everyone answered spontaneously , recognizing that they deserved condign punishment commensurate to their evil deeds. Then he would entrust the vineyard to other laborers who would ‘render to him the fruit in their due season’.

‘The stone which the builders have rejected has become the head of the corner’. ‘This is the Lord’s doing and it is wondrous in our eyes’.

With this parable, Our Lord Jesus Christ wanted to emphasize, initially, that the terms ‘holy nation’, or ‘the people of God’ don’t refer only to those people whom God has chosen or is in the process of choosing, but rather those who are genuinely carrying out His teaching and commandments, as these have been entrusted to them.

The Church is a vineyard, irrigated by the precious blood of Our Lord Jesus Christ and the blood of thousands, millions of martyrs and saints. And this vineyard of the Church is enclosed. It’s not something that grows wild, so that any and every body can do whatever they want, say what they want and teach what they want. No. The Church has a fence. The fence around the Church is the Gospel and the Sacred Canons. If people teach anything which is contrary to the Gospel and the Canons, they’re escapees who leap over the fence, get outside the vineyard and are therefore no longer members of the Church.