The Gospel readings which the Church has appointed to be read at the Divine Liturgy from the end of September (actually from the Sunday after the Exaltation of the Precious Cross) until Christmas, are all taken from Saint Luke. The first of this series contains the call of Jesus’ four first disciples to take part in His mission: Peter, Andrew, James and John. This story is told by all the Evangelists. Simultaneously, Luke also provides the narrative concerning the miraculous draught of fishes which was caught by the above disciples, on the advice of Jesus. This left Peter and his companions in awe and led him to declare: ‘Depart from me, for I am a sinful man, Lord’.

In narrating the event of the invitation addressed by Christ to His first disciples, the holy Evangelists were not acting as historians with an interest in the start made by the Messiah in His task on earth or in the enlistment of His co-workers; rather, they wanted to show the way in which the four fishermen accepted the invitation and responded immediately to it. In this they saw the prototype and model of how we all should react to the divine call. Looking at the narrative from this point of view, we might pause to consider more fully the following details. 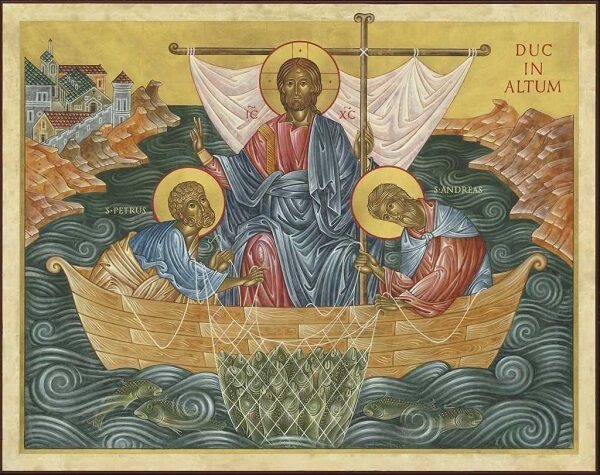 First of all we should note that the invitation is extended to the four potential apostles while they were actually hard at work, at the end of an exhausting night which had brought no reward. This may lead us to realize that we don’t need to withdraw from world and from life in order to encounter God. Certain philosophical systems teach us that such a flight is permeated with the notion that the world and matter are, by nature, wicked elements and that we have to seek our salvation in avoiding them completely. According to Holy Scripture, despite its corruption and descent into evil and sin, the world is the work of God. On His own initiative God encounters us in this world, in society, when we’re at work, in order to offer us salvation.

The invitation has already arrived for some, while for others it will certainly do so at some time. Will it be a moving sermon? Will it be a shattering experience? Will it be a rude awakening from the lethargy of indifference? Will it be an invitation from a priest? Or will it be something else? God knows a multitude of ways through which to communicate with His creation and to save us. Let’s not forget that Christianity isn’t the culmination of the efforts of the human spirit to find God, but is the manifestation of the actions performed by God to meet and redeem us, the most important of which actions are Christ’s incarnation, crucifixion and resurrection. 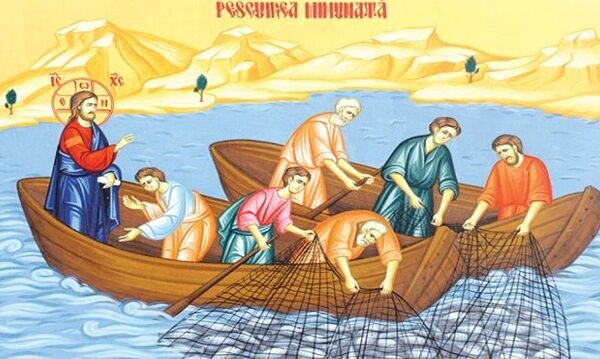 Another point which the narrative wishes to bring to our notice is trust in the person of Christ and a willingness to obey what He asks of us. The result of the trust and willingness of the four people in the narrative was the miraculous draught of fishes. Of course, Christ doesn’t perform the miracle in order to impress some ordinary people on the Lake of Gennesaret, but to demonstrate in advance that obedience to His command and whole-hearted devotion to Him would bear great fruit And indeed, the way in which Christ’s disciples later drew the whole world into their nets is no less extraordinary and miraculous. Because they didn’t labor on their own, but with the support of Christ and the guidance of the Holy Spirit.

A third point which shouldn’t escape our attention is Peter’s confession that he’s a ‘sinful man’. The awe occasioned by the presence of Christ and His miracle made him aware of his inadequacies and deficiencies. This is the first step if we’re to meet God. The high regard in which we hold ourselves, the arrogance, creates a barrier which prevents God’s grace from reaching us. Awareness of our sinful state makes the presence and action of the grace of God all the more necessary.

Today’s narrative sends us a wake-up call. We need to recognize our sinfulness, to accept God’s call with trust, to follow Christ immediately, wherever we are in our lives, through the performance of our duty and our work. And the miracle will follow at once; let’s not wait for it to happen first in order to be convinced.