Self-validated human values are dangerous not only for our spiritual and religious life but also for the moral and social life, because they easily transform themselves into means of self-justification and distraction. This dual function of values is due to their impersonal and created nature. What is created is always relative; it is never absolute. Even less, of course, can that which is created forge anything absolute, except in the imagination. But even absolute values which originate in the uncreated cannot function properly when they are taken as being impersonal. As Saint Sophrony says, where there is no personal form to being, there is nothing that lives. There is no good and no evil. 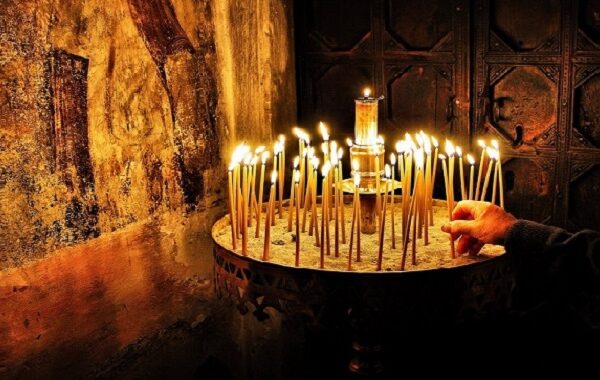 Good and evil, moral and immoral always exist in relation to persons and their intentions. If their intentions are good, values function positively. When their intentions are wicked, however, values act negatively, even if they appear to be beneficent. In this way, many of the values which have been formed over many years under the influence of Christianity but have gradually become separated from their spiritual basis, have been expropriated, side-tracked and ridiculed. Their true content and the purpose of their existence has been forgotten and they have become rooted in unstable and fleeting worldliness: they have become secularized.

The phenomenon of secularization has a broader context and differs in essence in the East and the West. Secularization of Christianity did not begin with modernity and its questioning and abandonment of traditional values; nor has it been completed by the post-modern annihilation of these values. From the point of view of Orthodox theology, secularization begins with the estrangement of life from faith; with the objectivization of the truths of faith and their divorce from their spiritual context. When the truths of faith are formulated rationally and are institutionalized within society as moral and social values, their spiritual depth is restricted and they become secularized. Thereafter, once they have become entirely estranged from their spiritual profundity, these values shrivel, become moribund and can be used as a means of overturning or altering their original context.

The supposed values of Western culture, such as equality, solidarity, fraternity and permissiveness, are, in the final analysis, shells or corruptions of Christian or Greek Christian values, which are now not only without a spiritual context but are also used frequently as vessels for the promotion of rationalist aloofness and refined barbarity. This came about through modernity and modernist values, while post-modernity has destroyed even the modified and rehashed modernist values, which have been replaced with uncertainty and nihilism.

This new situation is linked to the sweeping changes in science and technology which are occurring today at a much faster rate than in the previous century. Technology in particular, which was fawned upon and promoted mainly after World War II, brought about a dialectic which involved the emergence of new ideas and a re-evaluation of older ones. Moreover, quantum mechanics, which underpins the technology of all the modern pieces of equipment which both serve and simultaneously increase people’s multifarious needs, is in step with the predominant world view of contemporary society. Quantum mechanics does not have stable values, but reveals states. In it, priority is given not to numerical values but to relationships between things. These relationships, which are of an undefined nature, favor vagueness and the prioritizing of personal relationships. That having been said, it is worth noting that such a view is, methodologically, more in keeping with the Orthodox theological approach to things than the old, evaluative view was.

Christ’s Gospel essentially overturns all human values. The concept of value, which is also used in theological language, actually belongs more to the level of secular theology. A proper view of values can be achieved only in the apophatic spirit and in relation to absolute, personal value in and of itself. For Orthodox theology, this is the uncreated Triune God, Who manifested Himself in the world with the incarnation of the Word of God, Christ. The unbridgeable gap between the created and the uncreated and the insurmountable obstacle which exist between them cannot be bridged or overcome through human efforts and achievements. Bridging takes place through the incarnation of the Word of God in the person of Christ and through the communion of the Holy Spirit, Who assembles the Church and guides to ‘all the truth’.

In the person of Christ we have the unconfused union and interpenetration of the created and the uncreated. And His commandments which summon us back to our authentic state, though we are alienated by the passions, and which open up to us the eschatological perspective are the basis for the structuring of moral and social life. All the ‘reasons of beings’ derive from and refer to God the Word, Who became incarnate in Christ and called the fragmented rational beings to unity. In this way, all values are realized in the person of Christ, while, at the same time the human being is elevated to an entirely personal value ‘in the image’ of our archetype. Absolute value in and of itself, which is the uncreated Triune God, is portrayed in His ‘absolute’ created handiwork, each and every human being, in whom the whole of the human race is personified.