Today the Church celebrates the memory of the holy Fathers of the 7th Holy and Ecumenical Synod, which was called in Nicaea, Bithynia, in the year 787, and was presided over by Saint Tarasios, the Patriarch of Constantinople. It was attended by three hundred and fifty Orthodox bishops, to whom were added another seventeen hierarchs, and also boasted the presence of one hundred and thirty six monks who had suffered terrible persecution under the iconoclast emperors Leo III and his son Konstantinos V. The particpants anathematized the heretics who, for more than fifty years had forbidden Orthodox Christians to honor the venerable icons of Christ and His saints, supposedly because this constituted idolatry. 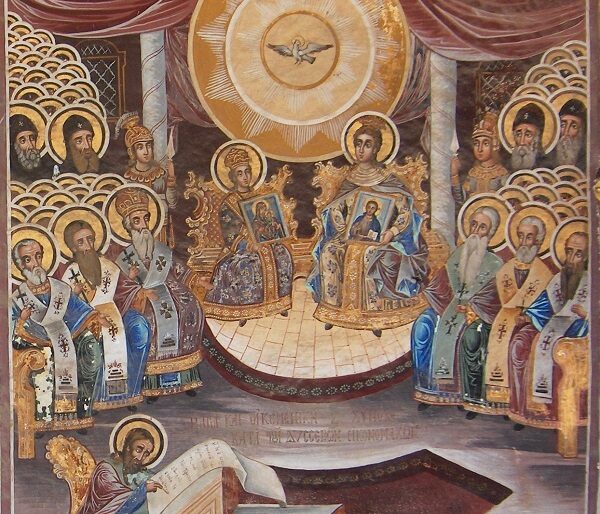 The most reliable truth
At first sight, today’s epistle reading seems to have little or nothing to do with this event. In writing to Titus, Paul twice tells him to urge the faithful not only to do good works but to be outstanding in doing so. A more careful reading, however, testifies to the fact this is not merely encouragement to engage in anemic, altruistic activism. This double exhortation of the genuine shepherd is based on a ‘trustworthy saying’, on a reliable truth, concerning which Titus is to speak with conviction and authority. This truth is certainly not vague moralism. As is clear from the preceding three verses, Paul is talking about the preeminent ‘good work’ of God, the kindness of our Savior Christ, Who regenerated us through holy Baptism and gave us the chance to be saved and to inherit His kingdom.

In this way, it’s made clear that our salvation doesn’t depend on our good deeds, but only on the boundless mercy of our Lord and God Who, for our sake, became perfect human and was sacrificed on the Cross, obedient to His Father unto death. So our good works are only truly pleasing to God and have any worth as far as our salvation is concerned when they come within the sphere of obedience to the divine will and when we see Christ Himself incarnate in the person of our destitute brother or sister, of every one of our kin, especially the incapacitated or impoverished.

The theology of the icons
All of these truths of salvation were formulated in the clearest possible terms by the God-bearing Fathers who constituted the 7th Ecumenical Synod. This is why this particular Epistle reading is the best summary of the significance of the great event of their commemoration. The holy Fathers didn’t say anything new; they didn’t discover any new theology. All they did was recapitulate the dogmas of all the previous Holy Synods, stating with clarity the truth revealed by Christ regarding His Person as God and human being.

This treasury was first passed down to us by the holy Apostles, chiefly by Saint Paul. And the Fathers, the ‘scrupulous guardians of the Apostolic traditions’, preached that God became human for our sake, in order to unite divine and human nature in the one Person of Christ. His divine nature is uncreated, invisible, impassive, and indescribable. Human nature is created, visible, passionate and describable. Since as a human person, Christ can be described and seen, we can have an image of Him and we can venerate it in order to demonstrate our love and worship of Him. By the same token, we can venerate icons of His saints, not, of course, as worshipping them, but as honoring them as His genuine friends and imitators.

Become a living image
All Christians who strive to resemble Christ by observing the ‘trustworthy saying’ given to us by the holy Apostles, become living icons and -why not?- are worthy of veneration. In this way, Christ’s holy virtues don’t remain barren but bear fruit. And this bounty, beyond any ‘social contribution’, is capable of providing the true ‘necessities’ for those people who are starving for the real meaning of human life. This is why the visitor to Saint Anthony didn’t ask any questions, but couldn’t get enough of looking at him. ‘It’s enough to see you, father’, he told him. In the person of the saint, the visitor was in essence venerating the icon of someone cured of the passions, someone who had reached the ‘likeness’ of God incarnate.

Every struggle for the endorsement of the Orthodox theology of the holy icons in the end also supports Orthodox teaching about human beings and our salvation. These are not, however, ‘struggles’ conducted through academic discussion, but are principally efforts aimed at purification and personal sanctification.