Mighty God, Potentate, Prince of Peace Father of the Age to Come

The Lord left Galilee to go to the eastern shore of the lake, on the border of Israel. The local inhabitants were Jews, but had been influenced greatly by the pagan way of life and so the demons had greater authority, because of the apostasy of the people. So Jesus went to the country of the Gadarenes. As he entered the town, he came across a man completely under the domination of demonic forces who asked Him: ‘What have I to do with you , Jesus, Son of the Most High God? I beg you, do not torment me’ (Luke 8, 28).

The man was totally overwhelmed by a host of demonic forces and had been marginalized by society, because he was viewed with fear and trembling by other people. Nearby there was a herd of swine and the devil beseeched Christ not to torture him, but to allow him to enter the swine, which is what happened. Christ healed the man, the demons left him and entered the pigs, which then rushed over the cliff. It’s clear from this description that the Lord, as Messiah, has complete authority over the supernatural forces. 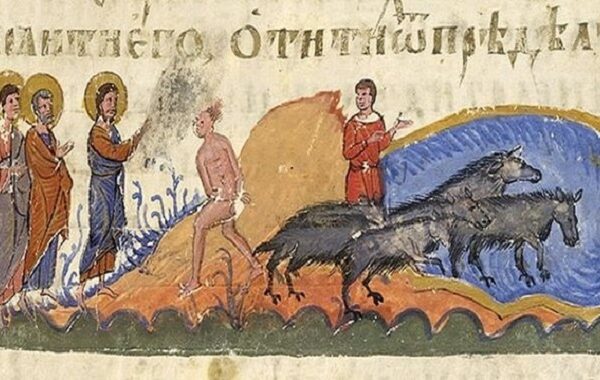 There are three aspects to the words of the demons and we’d do well to pay attention to them. These are:

1) There’s nothing in common between Jesus and the devil;
2) In the presence of Christ, the wicked devil makes a confession of faith which is of great theological significance;
3) In any encounter between Christ and the devil, the latter always comes off second best.

Just as there’s nothing in common between love and hate. Christ loves people and saves us. The devil hates us mortally and seeks, like a roaring lion, to tear us to pieces and cast us into the abyss of sin. Christ sanctifies us, gives us joy and freedom. The devil pollutes us brings us sorrow without end, loneliness, and locks us in the cruel fetters of sin and the passions.

Yet it’s a fact that all of us come into contact with the demonic energies of the devil on a daily basis. We’re often affected by our mind, which confuses our life by urging us to act against the will of God. This is because, from the passions therein, the mind moves us to bad thoughts. If we give in to them, they become sinful actions which drive us away from the warm, paternal embrace of God and strip us of His Grace.

The way in which the inhabitants of the region reacted to the miracle is a negative surprise, given that it was of benefit to the man possessed in particular, but also to the wider region as a whole. According to the Evangelist, who records this with sadness, once the miraculous liberation of the formerly possessed man from the evil spirits became known, people in the city did not take the news well and even asked Christ to leave. They did so because they were overcome with great fear over the punishment which had been inflicted upon them: ‘Then all the people of the surrounding country of the Gerasenes asked him to depart from them; for they were seized with great fear’ (Luke 8, 37).

The indifference with which they reacted to the miracle reflects their religious apathy and their real relationship and communion with God. This lack of concern with people’s religious dimension resulted in them living a life of attachment to material goods and concern for their economic interests.

The Lord says to the man formerly possessed: ‘Tell what God has done for you’ (Luke 8, 39). He wasn’t speaking only to him, however. He left it as an injunction to all of us. We are all obliged to speak about God’s blessings in our life. His measureless mercy and boundless love shouldn’t remain secret and be shelved away beyond recall. For this reason we must maintain our relationship with Christ through the sacraments and the spiritual struggle.

Through the narrative of the healing of the man possessed in the country of the Gadarenes, we see the change which happens in the life of each person who encounters Christ, the Savior and Redeemer. People have a need to be close to Christ, like the man healed today in the Gospel narrative. The life of each one of us is fraught with temptations and difficulties. By putting Christ into our life, we are on the path of the resurrection which will lead us close to Him. Let’s choose this path, so that we may be brought to Him.