The Divine Eucharist according to Saint Nikodimos (2)

B. The second issue which concerns the writer is centered on frequent communion. The Divine Eucharist is a subject which is also to be found in his other writings, such as the ‘Mystic Struggle’. In contrast to ‘On Frequent Communion’, here he’s much more uncompromising and explains Biblical, Patristic and Synodal passages as an injunction for Orthodox Christians to take communion frequently. Moreover, he demonstrates just how important it is for our salvation that we should take the Precious Gifts frequently, since this increases the love of the faithful for God. Christians who take communion frequently experience the real resurrection (that is, their own personal Easter).

This is the position highlighted in the words of Saint John Chrysostom at Easter: ‘Indeed, during the course of Lent we commune three or four times a week, or, rather, as many times as we wish to do so. Easter isn’t a fast, Easter’s taking communion at every Divine Liturgy. Learn that truth and listen to what Saint Paul says: that Easter is Christ, Who gave Himself in love as a sacrifice for us. Every time your receive the holy gifts, you celebrate our splendid Easter’. 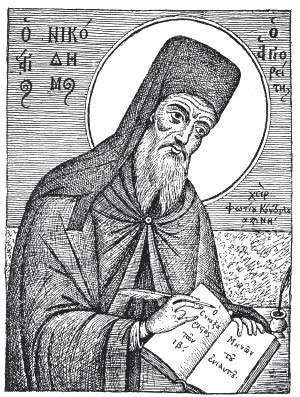 Often, Holy Communion cleanses our soul and aids our health: ‘Listen Christians. How much goodness you receive with frequent communion! Your wounds are healed and you receive complete restoration to health’.

This book also contains the understanding of the Divine Eucharist as medication and Holy Communion as a cure for our ailing soul and body. This understanding is closely associated with Patristic teaching on the importance of the life in Christ. The writer doesn’t develop this particular theme but does note how important it is and how much could be said about it: ‘all this supernatural goodness which we mentioned above binds every Christian who has a clear conscience to the Divine Sacraments of Jesus Christ, though it’s also open to much else besides, but this is not the place to concern ourselves with it in detail’.

C. In his book, Saint Nikodimos gives greater importance to those who oppose frequent communion. He deals with all the arguments against frequent communion known to him and rejects them one by one with gravitas and respect. As in other instances, he deploys meticulously selected texts from Scripture, from the Apostolic and Synodal Canons and the works of the holy Fathers.

Of the 13 arguments against frequent communion that are to be found in this part of the book, the most important is that this practice isn’t a dogma of the Church and so we shouldn’t follow it. In relation to this, Saint Nikodimos points out that frequent communion is something much more important than dogma. It’s a commandment from God. Saint Nikodimos confirms this through Christ’s own words: ‘Do this in remembrance of me’. These words constitute the rule for the Eucharist and mean that we should take communion every day until the end of our life, as did the holy Apostles after the foundation of the Church. The words of the Lord are of greater weight than the rest of the Church’s customs. This is what Saint Nikodimos teaches and in doing so he’s following the holy Fathers. His faith is preeminently Christocentric and is in the spirit of Patristic thought.

Conclusion
Saint Nikodimos’ book on frequent communion ushered in a conflict in the ecclesiastical circles of the Ecumenical Patriarchate at the time. Frequent communion was not the custom in the local Orthodox churches then. In the end, after much discussion, the book was given the official blessing of the Church and recommended as being ‘very good and useful’. But even today, Saint Nikodimos’ ideas are not received without reservation everywhere in the Orthodox world, and the issue of frequent communion is still alive. Saint Nikodimos addresses these words to the faithful: ‘I entreat you from the bottom of my heart and in brotherly love, awake from the deep sleep of indifference and pay attention when mention is made of frequent reception of the precious gifts of the Sacraments of Christ’.