The Holy Hieromartyr Dionysios the Areopagite

The holy hieromartyr Dionysios was a member of the Court of Areios Pagos, and was more prominent than anyone else because of his wealth, fame, prudence and wisdom. He embraced faith in Christ when he heard Saint Paul preach on the rock of the Areios Pagos and received holy baptism. He was consecrated bishop of Athens, succeeding the holy and wise Ierotheos on the Episcopal throne. From his predecessor, Dionysios learned divine and confidential mysteries of our faith. And thus, the saint left very important, strange and wonderful writings. We shall mention here, as a small example, certain elements of only one of his works. 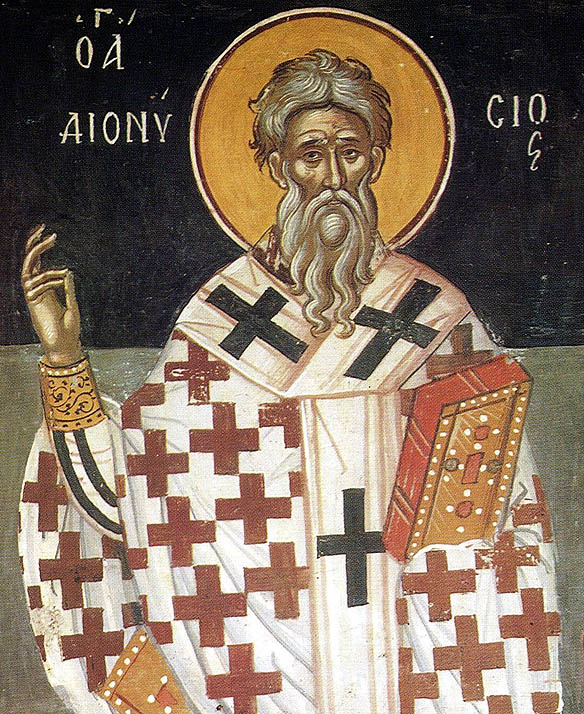 In one of his works, then, among other things, Saint Dionysios writes the following: “When I once went to Crete, I stayed with the priest Karpos, who was very virtuous. He also had a very clear mind and so, by God’s grace was most worthy of seeing visions. This priest never began the Divine Liturgy unless during the preparation, when he was reading the relevant prayers, some sacred and propitious vision appeared to him. Now this priest told me that he had once felt bitter because an unbeliever had enticed a Christian away from the Church and made him an atheist. While he felt this bitterness, he didn’t pray, as he ought to have done, for both men and he didn’t ask for God’s help so that the one who had been enticed into disbelief would return to the bosom of the Church and that the unbeliever would be attracted to faith in Christ. Nor did he take the decision to admonish them continually throughout their lives, so as to bring them to divine knowledge.  But he added that he’d never experienced such a thing before, that is going to bed and falling asleep frustrated and with bitterness in his soul. And, of course, I don’t know how such disapprobation and bitterness had infused his soul.

Karpos went on to say that he went to sleep as soon as night fell. At about midnight, he awoke to sing sacred hymns at that time, as was his wont. But at the hour of prayer, he was worried, though he shouldn’t have been, and fretted at the thought of people living as atheists, perverting the holy and straight paths of the Lord. With this thought in mind, he prayed that God would loose a thunderbolt and burn the two of them up, without mercy. While he thinking about this, it seemed to him, suddenly that the whole house where he was shook. It was then split into two parts, from the roof to the foundations, while a blazing flame of fire, which started in the heavens, reached right down in front of the house. (And, of course, the location gave the impression that it was in the country). The heavens seemed to be open and Jesus Christ was seated there, surrounded by countless angels in human form. This is what he saw when he gazed up in wonder.

But when Karpos looked down, he told me, he saw the ground split with a gap that was limitless and pitch dark.  At one edge of the mouth of the chasm he saw the two men he had cursed shortly before, standing utterly miserable and in great terror, since they were in immediate danger of falling into the pit because their legs could hardly support them. From the depths of the chasm emerged snakes, which wrapped themselves round the men’s legs and dragged them forward or bedevilled them with their fangs and struck them lightly with their tails. Then again, they would conjure up other ways such as whistles, pushes from below and blows in order to cast them into the dark pit.

And it seemed as if the two men really were close to falling into the pit, either through their own despair or through the ministrations of the snakes. Karpos said that he felt pleasure when he was looking down, while he took no notice at all of what was in heaven and was increasingly distressed that the two men hadn’t fallen into the pit. And since the situation was no nearer to a conclusion, he became sad and cursed. At some point, however, he lifted up his eyes to heaven again and saw Jesus as He had been before. Christ rose from His heavenly throne and descended to these unfortunate men to show them mercy and give them a helping hand. He took the angels with Him and they assisted the men, some taking one and some the other, so they wouldn’t fall into the chaos. And while the angels were helping the two men, Jesus stretched out His hand and looking at him said: ‘Go on then, Karpos. Strike me. I’m still willing to suffer again and many times more for people’s salvation. But before you do, look and see if you judge it wise to go into the chaos with the snakes, rather than be in heaven with God and His good and loving angels’”. 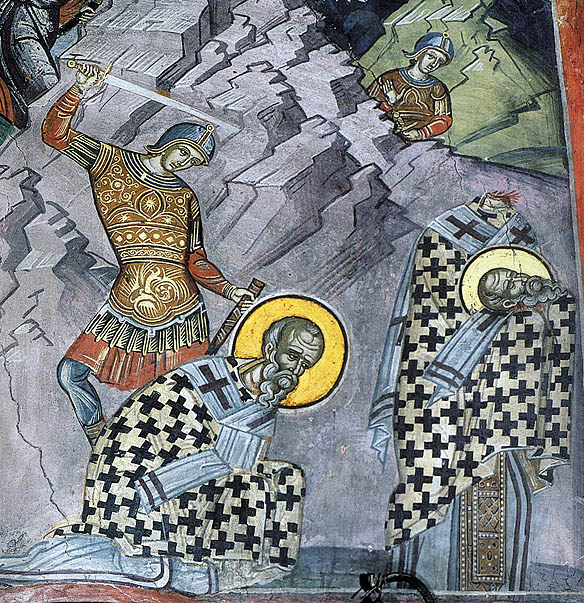 The Martyrdom of Saint Dionysius, fresco from the Monastery Dionysiou, Holy Mountain Athos, 1547

Since about the 9th century, there has been confusion between Saint Dionysios the Areopagite and Saint Denis (Dionysios) of Paris. In 827 A.D., Louis the Pious of France received a gift of the writings of Dionysios (actually those of the Pseudo-Dionysios) from the Byzantine emperor Michael II. Louis gave this to Hilduin, Abbot Saint-Denis and he, perhaps through confusion or a desire to boost the fame of his monastery, made the connection between Dionysios and Denis. In his defence and that of others who have believed the connection, we should remember that in those days scholars did not possess the research tools which are ours today.

Saint Denis was beheaded in Paris in the reign of Decius, possibly soon after 250 A. D. After his decapitation he is reported to have walked several miles, carrying his head, before depositing it with a pious lady named Catulla. His feast day is October 9.