‘The seed is the Word of God’.
The Lord often spoke in similes and parables. One of the most important of the parables is that of the sower. A farmer sowed his seed in a field and it fell on four different places: the road, a rock, among thorns and on good soil. Some of the seed which fell on the good soil bore thirty times as much fruit, some sixty times and some a hundred times (Mark 4, 20). Let’s have a look at how the word of God bears fruit. 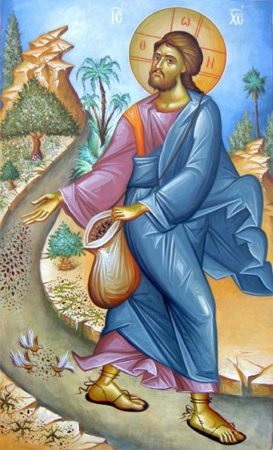 The explanation of the parable. The Lord interpreted the parable and said that the good soil is those people who have good and pure hearts (Luke 8, 15), people who ‘understand’ (Matth. 13, 23). They’re people who’ve listened with seriousness to the word of God, who’ve ‘received’ it (Mark 4, 20). All of these are people who didn’t reject the word of God, but with great patience and persistence cultivated God’s seed and then enjoyed a bountiful harvest. The word of God is Christ Himself. He’s not merely some human word concealed within a religious message, however great and overwhelming that may be. Behind the messages of the Gospel stands Christ Himself, the Son of God, His Word. As Saint Paul puts it: ‘My little children, for whom I am again in the pain of childbirth until Christ is formed in you’ (Gal. 4, 19). Indeed, Christ, the Word of God grows in our heart as an infant. Moreover, Jesus Himself said that those who hear the word of God and keep it are His mother and kin (Luke 8, 21). If we keep the word, the commandments of God, this is irrefutable testimony to the fact that Christ has been formed within us.

How do we understand the harvest of the word of God?

Saint Symeon the New Theologian gives the following example: A woman who’s pregnant with a baby can be absolutely certain that she’s carrying a child, even if there’s no obvious sign of her pregnancy and if other people don’t even suspect that she may be increasing. The same is true of those people who have welcomed the word of God into themselves: they understand very well that they have within themselves the nourishing seeds of God.

Let’s give a few examples. There are people who, before they believed in Christ, were egotistical, jealous, immoral and self-centered. Once they accept the seeds of the Gospel message, they begin to accept others, as well as themselves. Sins they once found unimportant, they now fight against. They start to give alms and, with the help of the sacraments of the Church, they make a serious effort to retain within themselves the light and the grace of Christ. They change radically and in a wonderful way. This is the harvest of the divine seed. The full harvest is to see God ‘as He is’. (Jn. 3, 2). 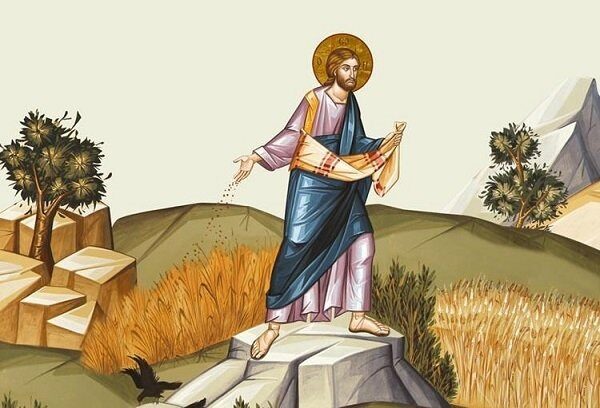 In his epistle to the Hebrews, Saint Paul talks abut those who ‘have tasted the goodness of the word of God’ (6, 5). He doesn’t talk about those who’ve heard the word of God, but rather those who’ve tasted it, those who’ve tasted Jesus Christ. Those who partake of the body and blood of the Lord- ‘in fear of God, faith and love’- taste the joy and presence of the Holy Spirit and feel them within themselves. Those who hear the Gospel feel the presence of God intensely in their lives. Those who cultivate the word of God are saved. To sum up, we can say that the harvest is the words of eternal life, the edicts of immortality, the promise of renewed life, the Gospel of the Kingdom of God, the feeling of Paradise, the face of Christ, the spiritual life.

The Church sows the word of God. The Church opens the way for Christ to come and enter into the faithful. It preaches Christ Crucified and Risen, while the sinful world has other messages. In our own warlike and sinful times, our Church urges us to listen to the word of God and to repent: ‘Repent then, and turn back so that your sins may be erased’ (Acts 3, 19). The word of God is addressed to all of us, including those today who have heard the strangest words, immoral, spiteful, avaricious, self-centered and anti-Christian. It’s simple and concise and calls upon us to bring Christ to fruition within ourselves. Let’s not ignore the word of our Lord, but let us show patience and offer all our spiritual powers, so that we may increase its bounty as much as we can and thus be saved.