Saint Minas lived at the time of the Emperor Maximian and was born in Egypt of pagan parents. According to Coptic sources, Minas was born in Egypt in 285 A.D., in the city of Niceous, naear Memphis. His parents were  Christians but did not have any children for a long time. His father’s name was Evdoxios and his mother’s Eufimia. On a  feast of the Mother of God, Evfimia was praying in front of an icon of the Virgin with tears that God would give her a son. A sound came from the icon saying “Amen”. A few months later, Eufimia gave birth to a boy and named him Minas.

When he came of age, he enlisted in the ranks of the soldiery. He served in the imperial army in Cotyaeus in Phrygia. At that time a commander called Phirmelianus mustered troops and went to the Barbary Coast- as North Africa was then known, to protect it from incursions. One of those he took was Saint Minas, who distinguished himself both for his bravery and his attitude.

One day, a command was given by the emperor that soldiers were to arrest Christians and torture them until they renounced their faith. Minas would not countenance this impious order and abandoned the military life to go and live on a mountain that overlooked Cotyaeus.

He preferred living among wild beasts to being among the pagan enemies of Christ, and stayed there for some time, cleansing himself with fasting, vigils, and prayer. The desire for public confession of his faith and martyrdom flared in his heart.

Confession before the Governor

One day, then, when the pagans were holding high festival, he came down from the mountain and preached Christ the true God to the crowd, saying:

“Know well that the true God is One and that what you worship are lifeless bits of wood”.

Everyone gathered around him, questioning how he dared to present himself there by himself, but those who were secret Christians rejoiced at the saint’s courage. The pagans seized the Saint and beat him, before dragging him before Pyrrhus, the governor of the city.

Pyrrhus respected the saint because of his age- he was then fifty years old- and because of the venerable figure he made.

So he asked him calmly: “Who are you, my man? Where are you from and what’s your religion?”.

“My homeland is Egypt”, replied the saint, “my name is Minas and I was once a soldier. But because you’re impious and pagans, I left the forces and went up onto the mountain. Now I’ve come here to present myself before all of you and to confess my faith in Christ, so that He will also confess me to be His servant in the kingdom of heaven, as He Himself says: ‘Whoever confesses me before other people, I will confess before my Father in heaven’”. 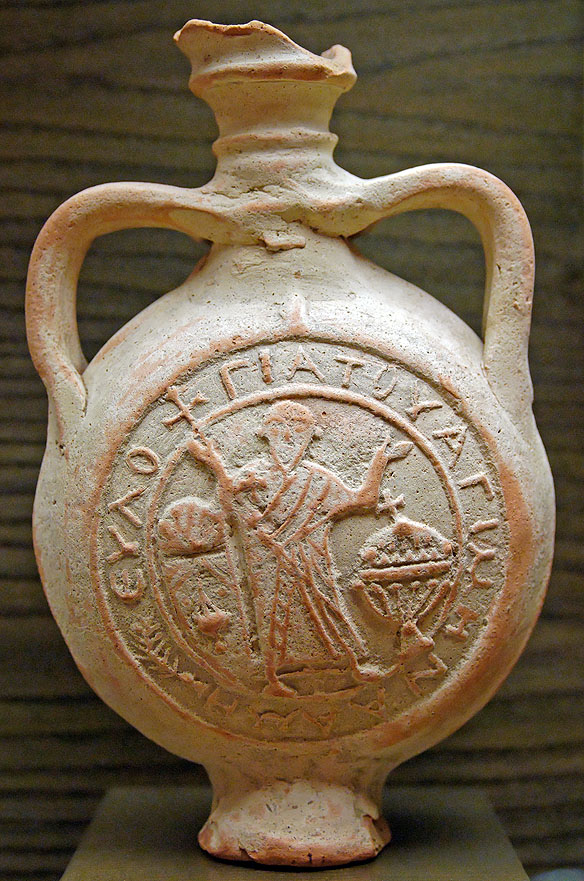 Pyrrhus was angered and ordered the imprisonment of Minas until he could decide how to put him to death.

The next morning, when the festival was over, the governor again had the saint brought to him and charged him with two misdemeanours. First that he had left the service of the emperor in the army, and second that he had dared to speak with impiety  to such a large crowd during the course of the festival.

The saint then spoke boldly in his defence: “Yes, governor, this is how we have to confess openly and with courage and not to be afraid of those who “kill the body but are unable to kill the soul” (Matth. 10, 28). We should proclaim Him with our hearts and words, as the Apostle Paul instructs us, saying: “Indeed, those who believe with their hearts are brought to righteousness, and those who confess with their mouths are brought to salvation” (Rom. 1, 10).

“I see, Minas, that you’re not so young and foolish as to be unable to understand your own best interests. You’re already elderly. Don’t be so stupid as to abandon sweet life for death. Think sensibly and you’ll be honoured by the emperor, and the gods will forgive you for cursing them yesterday”.

The saint laughed at these words and responded: “Nothing can separate me from the love of Christ. Not honours, not tortures Try me, if you want to see”.

“Seize that infidel, stretch his limbs and beat him mercilessly, so that he can enjoy what he asked for”.

The soldiers changed shift three times as they became tired, but the saint endured manfully, to the extent that they were all amazed and admired him. An old friend of the saint, a soldier called Pigasios, looked at the sorely wounded body of the saint and went to speak to him: “Can’t you see your body’s falling apart from the wounds. Do you want to die needlessly? Just tell them that you’ll make the sacrifice and your god’ll forgive you, because he’ll see you’re doing it against your will”.

The saint replied indignantly: “Depart from me all who work iniquity (Ps. 6, 9). Leave me alone, because you’re an enemy of the truth and not a friend. I worship Christ alone and He’ll fortify me to bear the wounds”. 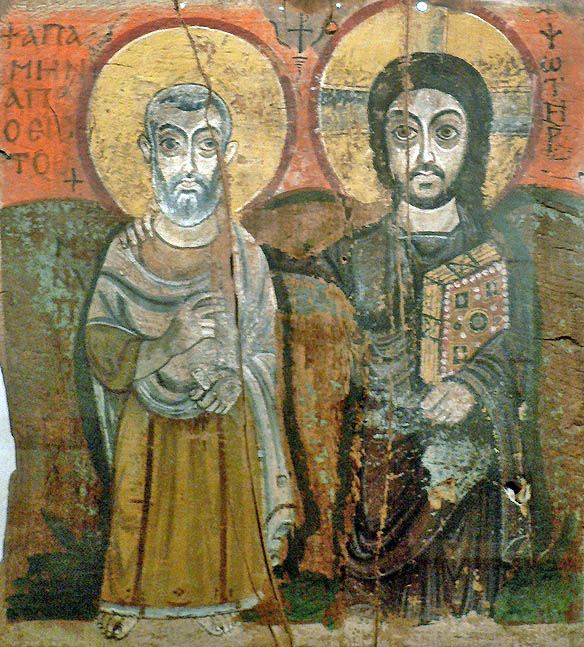 When Pyrrhus saw that the saint was unflinching in his resistance, he ordered that he be hung up, vertically on a stake, with iron nails to tear at his flesh. While the saint was undergoing this harsh torture, the governor mocked him, saying:

“Can you feel any pain in your body, Minas, or would you like us to add more punishments. so that you can enjoy yourself more?”.

“Do you think you’ll separate me from the true faith with games like this?”,  the saint replied.

“Stop being so pig-headed, Minas, and declare allegiance to Emperor Maximian”, Pyrrhus advised him.

“Governor, I won’t deny the eternal and heavenly king, in order to bow down before something earthly that decays”.

Seeing the saint’s resolution, he tried to win him over in a different way.

“Jesus Christ, the Son of God, to Whom the earth and the heavens are subject”.

“Don’t you know that this name makes emperors furious and that they order us to punish without mercy?”.

“It doesn’t bother me if the emperors get angry. I don’t think about it.  My purpose is to die confessing Christ, as Saint Paul says: ‘Who will separate us from the love of Christ; sorrow, consternation, persecution, hunger, nakedness, danger or the sword?’” (Rom. 8, 37).

After this, Minas underwent a series of tortures. They rubbed his wounded body with a hair cloth and burned his limbs with lighted candles. As he was being tortured, he said: “Today I’m shedding this hide of sin and am donning the bright raiment of the Kingdom of God. I have Christ as my helper, Who told us not to fear”.

Pyrrhus couldn’t comprehend the behaviour of the martyr and told him:

“Tell me Minas, how did you become so wise, and can answer like this, given that you were once a soldier and used to wars and slaughter?”.

“God gives me the wisdom to confound your impiety; He said that when we are brought before tyrants, we should not worry what we’re going to say: ‘for I will give you a mouth and wisdom, which none of your adversaries will be able to withstand or contradict’” (Luke 21, 15).

“Did your Christ know that Christians would be punished by us?”, asked Pyrrhus.

“Since He’s the true God, of course He knew”.

The governor now had no idea what else to say, but again tried to achieve his goal:

“Never mind the useless words, Minas. Choose one of the two: either friendship, which will win you your life, or confession of your Christ, which will earn you death”.

“I was with Christ, I am and I shall be always”.

“I’m sorry to have to put you to death, Minas. You’ve got an hour to think it over and decide your fate”.

“Give me ten years and I won’t decide anything else: to proclaim Christ as God and your gods as bits of wood and demons”.

The tortures continued even more harshly until one of the governor’s soldiers, Iliodoros by name, said to Pyrrhus:

“My Lord, as you know, the Christians are very stubborn . To be free of him, order him to be beheaded”.

Pyrrhus agreed and gave orders that Minas be put to death by decapitation.

As the saint walked to the place of his execution he told some secret Christians who were accompanying him:

“Please retrieve my body and take it to Egypt”.

When they reached the appointed spot, the martyr lifted up his hands and prayed, saying:

“I thank You, Lord, that You have found me worthy to become a participant in sufferings. I thank You  that You kept me steadfast in my confession. I beg You, receive my soul in Your kingdom”.

These were the saint’s last words. He was decapitated on 11 November. His body and head were cast into the fire. Christians retrieved what remained and took it to Egypt, in accordance with the behest of the saint.