‘When he heard this, he became sad’
The nobleman who approached Christ wasn’t a person of bad intentions. On the contrary, he was well-disposed, a strict observer of the commandments of the Law and, indeed, the sort of person who was concerned about his salvation. He wanted to gain Christ’s approval, which is why he addresses Him in flattering terms right at the beginning. ‘Good teacher, what shall I do to inherit eternal life?’* Indeed, Saint Mark, in his Gospel (10, 17), notes that the man went so far as to kneel before Christ before asking his question.

The good points about the young man
In the first place, he’d observed God’s commandments from an early age. Of course, most of the commandments he’d kept were negative in nature, i.e. he hadn’t committed adultery, he hadn’t killed, he hadn’t stolen and so on. It makes an impression that, even though he’s still a young man, he claims to have overcome the passions of the flesh, which was no mean achievement. We can safely say that he had the fear of God. He wasn’t insensitive spiritually. Moreover, his question: ‘What do I still lack?’ (Matth. 19, 20) is an indication of his concern over his salvation. Saint John Chrysostom comments on this point that the question ‘was a sign of his powerful desire’. This awareness that he was probably lacking something somewhere, together with his desire to become better, make him a likeable figure. The Lord looked at him and loved him (Mark 10, 21). The Lord loved him because He saw that all the gifts the young man possessed were real, not false. The young man really had defeated his flesh, had defeated his ego, had overcome his foibles and his various youthful passions. 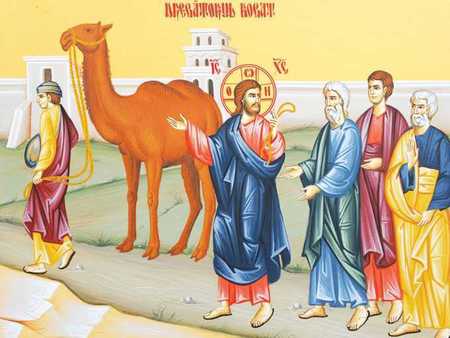 His great passion
It’s possible for people to observe God’s commandments, but still be in thrall to material goods. Our ego often thinks up sinful circumstances within us, which for the most part focus on our efforts to overcome the fear of death and to stabilize our life with the aid of material things. God asks for our complete disassociation from the things that keep us bound to the world. The young man had defeated the love of the body, but was defeated by the love of money. He was avaricious. The attachment to material wealth may prove to be the greatest obstacle to our entry into the Kingdom** of God. Becoming indifferent to money is considered a gift, and a great one at that. The Lord asked the nobleman to distribute his wealth to the poor. This would have been incomprehensible to the Jews. He told him to do something on a grand scale, but also gave him great prizes: ‘you will have treasure in heaven’ (Luke 18, 22). The Lord promised to make him even richer than he had been. He told him to give away the perishable and gain the permanent and eternal. The young man couldn’t respond to the Lord’s appeal and ‘departed saddened’ (Matth. 19, 22). Possessions and belongings took away his appetite for eternal life. In another homily, Saint John Chrysostom says that it’s easier for people to give blood than it is for them to cast away money. The effusive young man bit his tongue when faced with the Lord’s command. He fell silent, became somber and sullen, and went back home without accepting the Lord’s words of salvation.

The influence of the passions
Rather than make any other comment, let’s refer to the view of Saint Basil the Great on avarice which has such a terrible influence on us as a passion. He writes that he knows many great fasters, people of prayer, who sigh over their sins and show every gratuitous piety but won’t give a penny in alms. ‘Of what benefit is this excess of virtue?’ We have no benefit, if we’re governed by a passion, especially a mortal one, which exceeds the rest of our virtue.

My brothers and sisters,
Unless our heart is trained upon what is unseen, unless we can put the earth into its proper place as opposed to the heavens, unless we understand that we’re on earth but that our destination is heaven, it’s impossible for us to understand what the Church tells us about riches. We need to try to liberate ourselves from our various passions.

* This is the way the question is posed in Mark (10, 17). Here in Luke it is more like “What should I have done (when the time comes) so that I will inherit eternal life?’ (literally: ‘having done what…’). It’s a question of perspective: one is looking forward; the other is looking back. [WJL]
** The Greek word ‘basileia’ means ‘kingship’ rather than ‘kingdom’. In other words, it doesn’t refer to a place but to the actual reigning of the king. Thus, at Luke 17, 20-21, Christ tells the Pharisees: ‘The kingdom of God is not coming with things that can be observed; nor will they say, “Look, here it is!” or “There it is!” For, in fact, the kingdom of God is within you.’ In other words, ‘God reigns within you’. This is important because it indicates that God’s reign is not linked to a realm as such, but rather to time, to His activity as King, i.e. it was, is and shall be. [WJL]