The life of Saint Arsenios the Cappadocian – 2

While he was always charitable towards others, Father Arsenios was very hard on himself, and, out of his great love, made prostrations and fasted for others, who were unable to do so themselves. As a spiritual Father, he did not usually impose a canon on people, but would simply try to bring them to the point of awareness, so out of philotimo, they themselves would ask to do some ascetic act (of prayer, prostrations, fasting,) or charity work or what­ever kind of good deed they felt moved to perform.

Although his monastic cell was in the world, he managed to live out of the world. In this, as well as in his divine works and achievements, he benefited greatly from the two days he spent in retreat, praying in his cell. These days proved even more productive spiritually, because they not only sanctified his work of the following days, but we too, to this day, are nour­ished by the blessed fruit of this Father’s labours.

In addition to his other spiritual activities, it was his rule to remain in isolation in his cell every Wednesday and Friday and to do spiritual exercises and to pray. On these two days the threshold of his cell served as a substitute for him. Whenever any sick person arrived from afar, who did not know his rule and knocked at the door, Father Arsenios would certainly open it, but would not speak. He learned about the illness of the person concerned through signs, found the right prayer, read it and the sufferer would recover. On other occasions though, people knocked but he did not answer. Surely, during such times of prayer, he must have been in an ecstatic state of spiritual contemplation. Events indicate that on those days when he would shut himself in his cell, not only would he draw down divine powers of Heaven, while praying, but he, too, would be drawn up to Heaven by Angelic powers.

“Where we come from, we didn’t know what a doctor was. We would go to Father Arsenios, Hadji­ephentis. It was in Greece that we found out about doctors, but if we tell the local people these things, they think it very strange.”

From all of these miracles which people saw Fa­ther Arsenios do by the Grace of God, it was only to be expected that they would revere him as a Saint, which he was. And yet all of this placed Father Arsenios in a difficult position and forced him to strive harder to conceal his sanctity and to avoid people’s praises.

Perhaps he himself would not have been harmed by pride, but the praises of men would have been a sufficient reward for his struggles in this vain life. The only solution for him was, from time to time, to play the “Fool-in-Christ”, to present himself as the opposite of who he really was, by feigning idiosyncrasies and by acting in an odd manner, which is what he did. So as not to be called gentle and meek, he pretended to be irritable. So as not to draw attention to his fasting, he pretended to be a glutton, and many other such things.

If anyone ever said to him, “You’re a Saint”, Father Arsenios would answer abruptly, “Your family is not even a family.” When the other person heard him belittling his family in such a curt fashion, he would be very upset and the next time would not say that Father Arsenios was a Saint, but that he could be a Saint if he were better behaved.

Often, however, when he was about to pretend to be irritable, he did not manage very well, because his smiling eyes gave him away.  But he continued trying to convince people even with words that he was a sinful man of many passions. In fact, he used to say the following:

To the women particularly he presented himself as stricter and more eccentric, because they held him in greater reverence and would try like crazy to be the first to serve him and to bring him food. So when a woman brought him food, he would sometimes tell her curtly that it was not enough, and not take it, and at other times, again abruptly would say that it was not well-cooked and again would send her away.  These distraught women were at a loss, because they did not know where they stood with him. Almost  everyone was of the opinion that Hadjiephentis was very eccentric and strange, but at the same time very much a Saint… 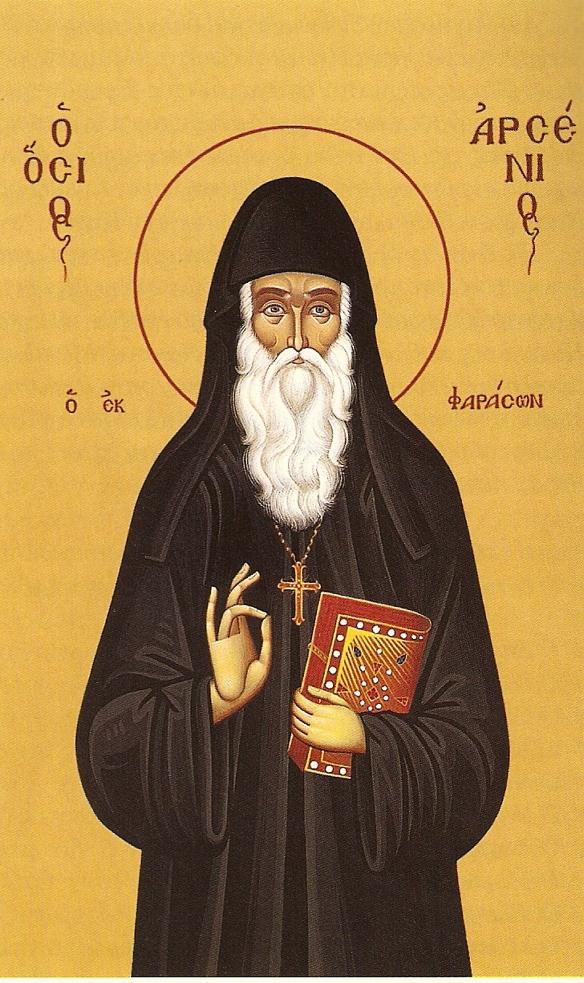 However much Father Arsenios tried to conceal himself, it was not easy because they had known him well for years. On all fasting days, even every Wednesday and Friday and Monday, which is dedi­cated to the Angels, he would not even drink water before the sun went down.

His rule of prayer for the services was as follows: On all major feasts, he kept all-night vigils, which he started at sunset and continued until sunrise. He usually held them in the Chapel of Panaghia, or that of Saint John Chrysostom, with the chanter Prodro­mos only, unless they met someone on the way who was suffering but was able to walk, in which case they would take him with them to the all-night vigil. Father Arsenios would heal him as soon as they reached the  Chapel, so that he, too, could praise God.

On one occasion, when Father Arsenios and the chanter were on their way to the Chapel of Saint John Chrysostom, they met up with a woman who was mute.  They took her and her companions along with them, and as soon as they reached the Church, he read the Gospel over her.  The mute woman at once began to speak, and they all praised God.

On other days, though, he usually held the service in his cell or in the Church of the Blessed Martyrs Varachesios and lonas, starting at 9 p.m. (secular time) and finishing at3 a.m., after which he would rest for two or three hours. Often on week-days he would go to the nearby Chapels and celebrate the Divine Liturgy after his brief rest. Vespers were again usually said in the Church of the Blessed Martyrs.

Once, when Hadjiephentis was going to Vespers, the moment he unlocked the door of the Church he saw a Woman Whose face was  shining, coming out of the Church. She disappeared right in front of both him and the people who were with him. (Solomon Koskeridis was among them.) Hadjiephentis said it was Panaghia.

For the vigils which he usually kept in far-off Chapels, no matter how distant they were, he never took an animal with him, but always went on foot, and then stood throughout the vigil. His chanter often asked him to sit for a while on the donkey which he took to the outlying  Chapels, but Father Arsenios never agreed to do so, because it was his rule never to sit on an animal throughout his life, no matter how great a distance was involved. Even to go toJerusalem, where he went five times, he walked for five days to get to Mersina to take the boat.

Father Arsenios’ great sensitivity would not allow him to tire animals and rest himself. It wasn’t enough that he walked everywhere, but he usually went bare­foot, as well. When he encountered people, he would put his shoes on for a while, and then when they were off in the distance, he would put them back in his hand woven bag…….

The humble heart of Father Arsenios had by now filled with love for God and Man and the abundance of his love spilled over to animals as well. He loved  them more than himself and preferred that he should tire rather than the animals.

Although he was so compassionate, even towards animals, he nevertheless tried to be hard towards women, so that they would not revere him so much, thus wounding his own sensitive heart when he could not find an alternative course of action.  In other words, he managed to give the opposite impression to others, by pretending to be severe, irritable and odd…..

Father Arsenios was always making efforts to hide himself, while the Grace of God which dwelt within him was continually giving him away, and even a distance.

The Patriarch of Ecumenical Throne held Hadjiephentis in reverence, and would often write to him to ask him to pray for the Ecumenical Throne. Hadjiephentis would then take Prodromos, and the two of them would hold all-night vigils, as I mentioned before, in the Chapel of Panaghia (so Kantzi) or in the Church of Saint John Chrysostom…..

Repeatedly people would suggest that he should become a bishop, but he always refused on the grounds that it would not be right since he was of such an irritable nature. But to those, again, who knew full well that he was gentle and meek, he would say:

“I won’ t become one, because I’m afraid of pride.

The higher the mountains, the more the storm-clouds gather.”

The Patriarch of Jerusalem also wanted to make him a bishop, and had persuaded his brother, Vlasios, to beg him to accept, but Father Arsenios still would not consent.

He preferred the poor sackcloth cape thrown across his shoulders, which concealed the Kingdom of God dwelling in his humble soul, rather than the rich and regal episcopal cope. Since he did not wish to displease the Patriarch, he agreed to become an Exarch of the Most Holy Sepulchre in order to help pilgrims, and an Exarch of his District so as not to upset the Bishop of Caesarea, whom he loved and respected greatly.

There is, of course, much evidence, from both his holy life and his many miracles, which indicate his saintliness. While most of the older Pharasiotes have died, there are still enough of the younger generation still living, who were also eye-witnesses to many of the events recorded at the end of this book.

The blessed man of God, Hadjiephentis, apart from his many other gifts, was also endowed with the gift of foresight. He had been told by God, years before, that they would leave forGreece, and so would tell the Pharasiotes not to spend too much, but to save for the journey.

A year before the exchange of populations, a woman went to him and said: “Your blessing, Hadjiephentis, I hear that this year they’re going to move us.”

“Don’t worry; keep on with what you’re doing, because there’s another year to go,” Father Arsenios told her.

When that year had gone by, the dread message then arrived that they were to get ready quickly for the journey. The expulsion from their fatherland was naturally a very bitter affair, but good Father Arsenios had sweetened even this, by saying that they would be returning to their motherland, Greece.