The Parable of the Rich Man and Lazarus (4)

Eighth. In the parable, it says that between the place where Abraham was and hades, where the rich man found himself, there was a ‘great chasm’. And that it wasn’t possible to cross from one side to the other.

Naturally, this is not any particular place, but, as we mentioned above, a particular manner of existence. There’s a clear distinction between Heaven and Hell as a specific way of life.

Heaven and Hell don’t exist from God’s point of view but from ours. God sends His grace upon all people, since ‘He makes the sun rise upon the righteous and the unrighteous; and the rain fall upon the wicked and the good’. If God’s given us a commandment to love all people, including our enemies, it’s because He does the same. It’s impossible that He shouldn’t love sinners. But people experience the love of God differently, depending on their individual spiritual state. 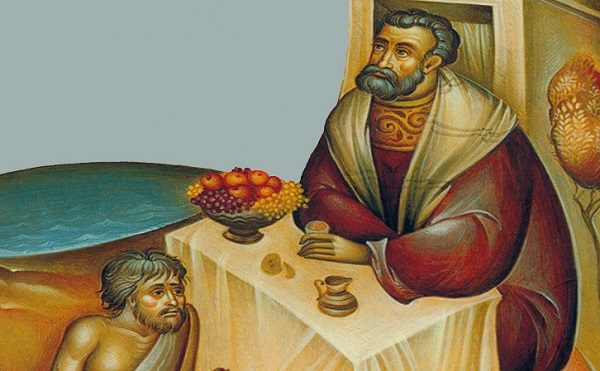 Light has two capacities: to illumine or to burn. If you’ve got good sight, you benefit from the effulgent properties of the sun- light- and the whole of creation rejoices. But if you’re deprived of your sight, you feel only the burning capacity of light. The same will be true in the next life, too, as well as in the life of the soul after its exit from the body. God will continue to love those in Hell, but they won’t feel this love as light. They’ll experience it as fire since they won’t have spiritual eyes and spiritual sight.  Something similar is true also of Holy Communion. Everyone can take Communion, but for those who are prepared it becomes light and life, whereas for those who aren’t it’s judgement and condemnation.

The Church presents this in the depiction of the Second Coming. We see light emerging from the throne of God, in which the saints bask, and, from the same throne, a river of flames springing forth, inundating the unrepentant sinners.

This is why, in the Orthodox Church, we place so much emphasis on curing people. The Church is a spiritual hospital, a sanatorium where the spiritual eye, the nous, can be treated. This is what is ailing and this is what needs to be made whole. This is the whole task of the Church.

Ninth. Abraham doesn’t respond to the request of the rich man to send Lazarus to earth to preach repentance to his brothers. He justifies his position by saying that if people don’t listen to Moses and the Prophets,  they won’t be convinced ‘even if someone should rise from the dead’.

Carnal people won’t repent, no matter how many miracles they see in their lives. They live in a deathly sleep. This is a reality. Unless our freedom is brought into play, there’s no repentance. Everything  occurs through the operation of God and the cooperation of people.

The greatest event in history is the incarnation of Christ, His Resurrection,  and the foundation of His Church, which is the Body of Christ risen as God and human person. If you aren’t moved by that astonishing reality, if you can’t be persuaded by the life of so many saints who are members of the Body of the risen Lord, then you aren’t going to be convinced by any miracle, however great it might be.

Our salvation and rebirth isn’t a matter of conjuring tricks, but is the product of the free expression of our will, the result of pain, sweat and struggle. Unfortunately, many people in this day and age are content with ‘magical’, external events. Becoming convinced of the existence of the next life, is a matter of inner spiritual sensitivity. Because even if someone’s raised from the dead, there’s a fair chance it’ll be taken as a ghost.

There’s much talk today about out-of-body experiences. Some people say that their soul left their body or came close to such an exit, but then returned to the body. These people relate the terrible things they saw and faced. In the Orthodox Church, we recognize that there have been instances when the soul has re-entered the body, in other words cases of resurrection, but with the power of Christ. These are exceptional events, however, and don’t just happen to anyone. There are saints who underwent such awe-inspiring events, because they experienced Paradise and Hell in their lives, they lived the fires of hades, they saw angels and demons. When they returned to themselves, they lived a life of repentance and preached repentance to other people. But most of these experiences are either demonic or the result of repressed desires or episodes in the past, are fantasies or even states induced by the tranquillizers and narcotic drugs given to alleviate pain in terrible sicknesses. In reality, it takes great discernment to be able to distinguish between these conditions and to know whether they come from God, from the devil or from psychological and bodily aberrations.

We in the Church don’t wait for the raising of saints or experiences of such states before we believe. We have Holy Scripture, the lives of the Prophets, the Apostles and the saints; we have their words and teachings; and we also have their holy relics as well as conviction regarding eternal life. At times, each of us is allowed by God to experience Heaven and Hell in our hearts.

Other than that, we keep Christ’s commandments in order to effect our cure, and in this way we resolve many existential, inter-personal, social and ecological problems. Observation of God’s commandments makes us balanced people.

Tenth. The parable of the rich man and Lazarus also shows us the means we must use to effect our healing, so that after death and Christ’s Second Coming, we can experience God as light, not fire. Abraham  said to the rich man: ‘They have Moses and the Prophets. Let them listen to them’. We have to observe the Law and submit to the Prophets of every era.

A Prophet is someone who, by God’s grace, sees the mysteries of the age to come and who tastes the Kingdom of God even in this life. There are Prophets such as this in both the Old and the New Testaments. They received the Revelation, they lived in the Kingdom of God, they came to know its mysteries and then passed them on to the people.

The Prophets, who are to be seen as the real theologians and spiritual fathers, regenerate people and lead them towards life. Spiritual guidance is linked to and identified with our spiritual rebirth. In reality, you can’t be reborn unless you’re connected to a person of God, a Prophet.

And there are Prophets in this day and age, too, who are preaching repentance, a return to God, and who are pointing to another way of life and thinking. Even if we can’t meet such a Prophet, we have the words of the Prophets and, through reading them, we can learn about the Kingdom of God and what we must do to enjoy it.