The Holy Great Martyr Barbara lived and suffered during the reign of the emperor Maximian (305-311). Her father, Dioskoros, was a rich pagan, a prominent citizen in Ilioupolis in Syria. After the death of his wife, he devoted himself to the upbringing of his only daughter.

Dioskoros seems to have been a dedicated pagan and he built a tower for Barbara, where only her pagan teachers were allowed to see her. 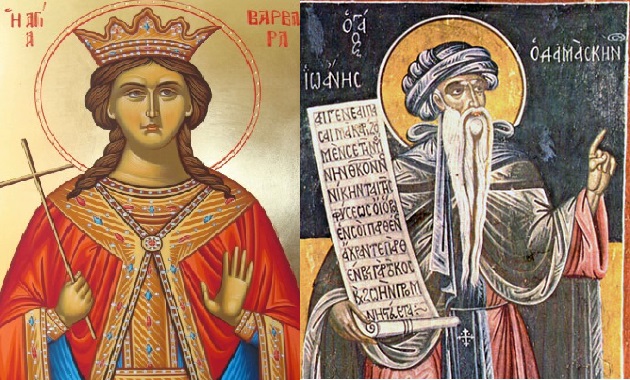 But Barbara became convinced that the inanimate idols were merely the work of human hands, and although her father and teachers worshipped them in their own fashion, she realized that the idols could not have made the world she saw when she looked out from her tower.

The fame of her beauty (or, to be cynical, her father’s riches) spread throughout the city, and many men sought her hand in marriage, though she refused all of them. It may be that this produced a rift between father and daughter and that Dioskoros decided that keeping her out of society might not have been an ideal solution. He therefore permitted her to leave the tower and gave her full freedom in her choice of friends and acquaintances. Barbara went out and met young Christian girls in the city, and they taught her the fundamentals of the Christian faith. By God’s providence, a priest, disguised as a merchant, arrived in Ilioupolis from Alexandria and, after catechizing Barbara, baptized her, before returning to his own country.

There is a story that during this time a luxurious bathhouse was being built at the house of Dioskoros, while he was away. By his orders the workers prepared to put two windows on the south side. But Barbara, taking advantage of her father’s absence, asked them to make a third window, thereby forming a Trinity of light. When her father returned and expressed dissatisfaction about the change in his building plans, his daughter told him how she had come to know the Triune God, the saving power of the Son of God, and the futility of worshipping idols. As one might imagine, her father was furious, so much so that Barbara quickly made herself scarce and hid for a time in a cave.

With the assistance of a couple of shepherds who knew the area, Dioskoros was able to locate her. He gave her a sound beating, placed her under guard and tried to starve her into submission. In the end, he handed her over to the prefect of the city, Martianus. This may seem unconscionable behavior on the part of a father towards a daughter on whom he had doted, but he must have been bitterly disappointed: she had rejected the religion he adhered to firmly; she had turned down all offers of marriage; and she would have been undermining his position in the pagan community. Not that this is an excuse.

Barbara was subjected to public humiliation and torture, the common fate of ‘miscreants’ in those days . Among the crowd watching the proceedings was a Christian woman called Juliana, who berated the torturers and was immediately seized herself. They were then both martyred, Dioskoros himself, according to tradition, being the one who beheaded Saint Barbara.

In the sixth century her relics of the holy Great Martyr Barbara were transferred to Constantinople, and six hundred years later, were transferred to Kiev by the daughter of the Byzantine Emperor Alexios Komninos, Barbara, who married a Russian prince. They are now in Kiev’s cathedral of St Vladimir, where an Akathistos Hymn to the saint is sung every Tuesday.

This is about as much as we know with any certainty about Saint Barbara. There is, however, an encomium written to her which is almost unreadable today. It begins: “At the time when the impious Maximianus was emperor and Marcianus was governing, there was a local official called Dioskoros, who was exceptionally rich and was also fanatical regarding idol worship. He had an only child, a daughter called Barbara, who was outstanding for her beauty and a shining example of modest behaviour. So he built a tall tower and locked the maiden up in it, so that other people would not gaze on the brilliance and radiance of her beauty, which blossomed and sparkled”.

These accounts, however, were not the ‘objective’ narratives upon which we pride ourselves today, even though our criteria for objectivity are often flawed. Instead of  ‘selfies’, they had tropes. Thus Saint Barbara was ‘outstanding for her beauty’. Another virgin saint who was exceptionally beautiful? Were none of them plain? No, because the description is of the person, not of the physical appearance. And Saint Barbara was shut up in a tower. Of course it’s possible that she really was, given the attitude of some people to the way their daughters should be brought up, but perhaps it also is a trope, from the Song of Songs: “Your neck is like an ivory tower”. This was also used of the Mother of God and was a symbol of purity. The Song of Songs goes on to say: “Your nose is as the tower of Lebanon looking toward Damascus”. Well, Ilioupolis was to the west of Damascus and so probably not far from the region which people at the time called “Lebanon”. The point is not that Saint Barbara is a figment of someone’s imagination, but that we need to understand how people in the past presented her story.

By an odd coincidence, the person who wrote this encomium for Saint Barbara was also a Syrian and his feast-day also falls on December 4. As remote as Saint Barbara seems to us, because of historical circumstances, Saint John the Damascan almost leaps out of the pages of history to greet us. C. S. Lewis, the author of the Narnia stories and The Allegory of Love, was a Medievalist and it takes no great feat of the imagination to see him and Saint John, who was distinguished polymath (dialetics, theology, apologetics, poetry, music), discussing allegory and tropes over a glass of port in an Oxford college.

Saint John was born into a privileged background. It is reported that his grandfather surrendered Damascus to the invading Arabs. This might account for his Arabic family name, “ Mansur”, “the victorious one”, though this does not mean that he was an Arab (A meat vendor in Anglo-Saxon England would have been called ‘Fleshmonger’, but after the Norman conquest he became ‘Butcher’). His father, Sarjun (=Sergius) served the Umayyad caliphs and there are reports, which may not be true, that, as a young man, John led a dissolute life as the scion of a prominent family. Be that as it may, he became a monk at Mar Saba monastery and became a priest in 735, at the age of about 60. He departed this life in 749.

He is, of course, particularly famous, for his defence of the holy icons and he also wrote An Exact Exposition of the Orthodox Faith, which is sometimes criticised for not being ‘original’, though how one can be original with the truth is not immediately apparent. This work is available on the Internet as a free download.

Apart from this, however, he also wrote some of the loveliest poetry in the whole of the hymnography of the Orthodox Church. He is responsible for the Octoechos, the arrangement of the hymns of the Church into eight tones; he wrote at least part of the funeral service, the most beautiful of our services; he wrote, or set to music, the canon to the Mother of God for the Annunciation; many of our most familiar hymns; and, of course, the Easter canon. All in all a most remarkable man, a ‘man for all seasons’.

Saint Barbara was born into a repressive culture of intolerance and brutality. In the same geographical region, Saint John was born into an Islamic culture which was tolerant of Christians and, indeed, appointed them to high positions of trust in the state. How tragic it is that today, this ancient Christian community which gave us saints such as Barbara and John, as well as John Chrysostom, Peter of Damascus and, of course, Isaac of Nineveh should again be threatened by fanaticism and the desire to uproot Christians and expel them from their ancient homeland. May the prayers of our Syrian saints be with all of us.