[…] Recent images of churches celebrating their feast day amidst a strong police presence, with the courtyards cordoned off with railings and tape, are a sign of many things, the most obvious and not the least being the fact that the Church and our Orthodox churches are part of the problem not the solution, with everything this implies for the hearts and conscience of the people. They want us to be there for them, not to be cut off, celebrating liturgies by ourselves, like a separate, privileged caste that’s exclusive and not open to ‘the many’. Throughout this trial, our parishioners have fasted, exercised self-restraint, prepared, but they still can’t take communion, or even pray in a church, unlike the clergy and those in a salaried position in a church.

Having described the general situation, let’s now go on to the central issue, starting with the lines from the song quoted above. We’ve seen, both from ourselves and from the general ambience, how, at the beginning of the lockdown, we’d go into the church with pain in our heart, especially when we were censing empty seats. Gradually, though we became accustomed to this ‘absence of people’ and, as time goes by, we’ve come to think of it as the status quo, something only to be expected! If that’s true on the part of the shepherds (although this is not to say that we’re representing and expressing the views of all of them) how much more so is it true of people who want a good relationship with the Church but also to have as little as possible to do with the clergy. If these people have grown used to not going to church, and if they’ve found a rhythm and orientation in their lives without going to church and sharing in the sacramental and pastoral care of the Church (it’s well-known that nature abhors a vacuum and always tries to fill it) who will guarantee that, when churches open again, people will return to their old, conscientious, ecclesiastical and liturgical life? 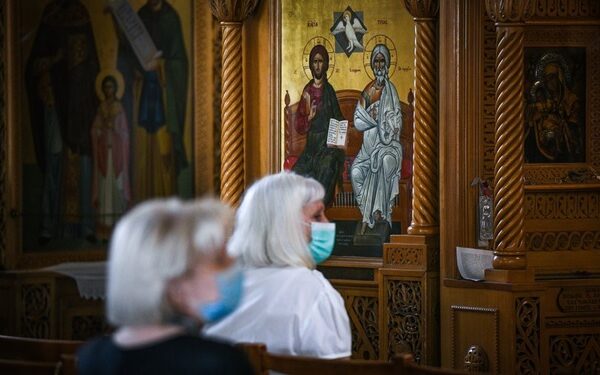 All the sermons, messages and exhortations to stay in their ‘home church’, the declarations that ‘God is everywhere, that ‘the faithful are in danger, not the faith’, were all well and good at the time when they were voiced by clergy of all ranks, but are we sure they all had the discernment to understand that what they were saying was true only for the specific circumstances we were facing then and there, and wasn’t meant to be universally applied or to endure ad infinitum? We know that many people, consciously or otherwise, choose to adapt what’s been said to their own wishes, as it suits them, rather than to stay with the spirit in which it was expressed. In general, I very much fear (and I hope I’m wrong) that the damage which has been caused will take years, if not generations, to repair… if, in fact, this can ever be achieved.

We have inside information, though it has also been announced by the Standing Holy Synod [of Greece], that a red line has been drawn, stating that the churches must be open for the 12 days of Christmas, that is until Theophany. We don’t know whether any attention will be paid to this, what measures will be taken should this not be the case and if it will mean an open rift with the state. Be that as it may, a great many people already think that the Church has been slow to react and that it ought to have been more energetic regarding these matters from the very first lockdown. There are, of course, others, who applaud this mild (if not passive) attitude on the part of the Church and its compliance, but equally there are many enemies and those opposed to the Church who are also glad to see it, for other reasons, of course.

In conclusion, and to avoid any misunderstanding, it’s self-evident that we have trust in and owe obedience to the Church, even when it’s hurting us and giving us pause for thought, or even when we have a different, perhaps opposite opinion from it. It’s certain that our hierarchs know more than we do and are definitely more enlightened. Like good parents, they listen to and hearken to the pain and requests of their children, which is why we ask humbly that they should understood our point of view also and, in particular, protect our Church as an institution from the appetites and interventions of actors outside the Church, especially when these are presented as being ‘for our own good’.

The Gospel for the 10th Sunday of Luke, which was read recently, deals with the indignation of the leader of the synagogue because Christ effected a cure on the Sabbath. Similarly, today, on the pretext of the coronavirus, all sorts of hypocrites are wagging their fingers at us because we want to be healed and nourished in body and soul by partaking of the body and blood of Christ. There are even some who think it’s a source of infection and the cause of the spread of germs! I think the passage at Luke 13, 17 in this particular Gospel reading, says it all: ‘And when he had said these things, all his adversaries were ashamed: and all the people rejoiced for all the glorious things that were done by him’. Amen.