“Now You are letting Your Servant Depart in Peace”

When the righteous Symeon held the Holy Infant in his arms at the Temple of Jerusalem, he prostrated his soul before Almighty God, glorifying the majesty of His Divinity with these words:

“Lord, now You are letting Your servant depart in peace,
According to Your word;
For my eyes have seen Your salvation …”

In the previous Homily, we began our examination of the Song (Praise) of Symeon by highlighting two major themes that can be found in the text. We continue now with a third, which is the desire to peacefully end our earthly journey, allowing our souls to enter the heavenly kingdom. 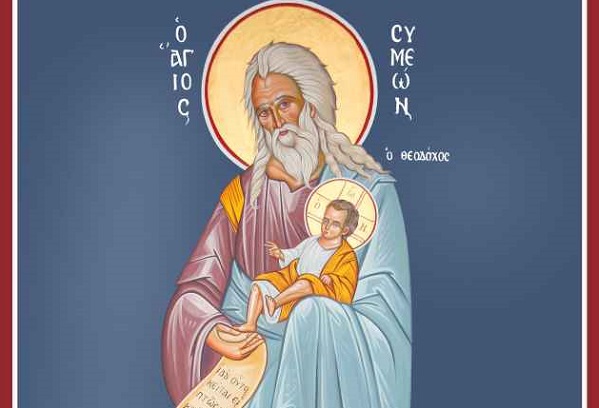 The honorable Symeon was deemed worthy to see Christ the Savior, and as a result he felt that his work in the world was finished. That the time had come for him to pass from this life, and into the eternal one. From corruption to incorruption. This is what he is asking for in saying “Lord, now You are letting Your servant depart in peace, according to Your word.” This “departure” is the journey that all souls must take when the moment arrives. None of us can decide where or when this will happen, but instead we wait patiently for the hour when the Lord will let us go. This is why Symeon asks the Lord to “let him depart,” because he knows that God alone decides when His servants will leave this world.

Symeon gratefully opened his heart to God, having received the fulfillment of God’s promise. Being very old, he already sensed that his end was near, because what he had yearned for his whole life had been accomplished. There was nothing else for him to do, and so he could leave this world with no anxiety, no fear, and with total peace in his heart. The same thing happens with every person who has known Christ and lives in communion with Him. They are not afraid of this journey, and for them there is the word of the Lord: “Most assuredly, I say to you, he who hears My word and believes in Him who sent Me has everlasting life, and shall not come into judgment, but has already passed from death into life” (John 5:24). St. Paul the Apostle shares the yearning of Symeon, as he writes in Philippians: “I have the desire to depart from this world and be with Christ” (see Philippians 1:23).

Let us also remember the way in which our contemporary Saint, Elder Porphyrios of Kavsokalyvia, confronted death. In recalling times where he was seriously ill, he said that “other people used to see my dying, but I had given myself up to God’s love…I was not afraid of death. Where I would be going is where Christ is…I am praying that I may love our Christ very much, so that I might have the joy of love that sends fear away” (Life and Words, p. 522). He also used to say that “going to the next life is like opening a door and finding yourself in the next room, like crossing a bridge to get to the other side” (same, p. 633). “When you love Christ, then, in spite of the feeling of your sinfulness and of your weaknesses, you have the certainty that you have overcome death, because you are in the state of being in communion with Christ’s love” (same, p. 634).

It is not only the Saints who face death with a peaceful heart. There are many other faithful people in the world who do the same, after a lifetime of striving to live according to God’s will. There is a story of someone who visited a woman whom he knew was close to death. He was surprised when he heard her say to the person serving her: “My young one, let us treat Mr. ________ with a candy on this occasion of joy!” The visitor was amazed, and asked this gravely ill woman what she was talking about. “Is there good news about your health, some improvement?” And she replied: For the joy of my departure; I am going to the Lord!” The light of this joy could be seen in her eyes.

My dear brothers and sisters, there are people who panic at the very mention of the word “death.” For those who have cut themselves off from Christ, and refuse to live according to His will, death is truly terrifying. For the repentant Christian who loves Christ and struggles to live according to His will (goes to church, receives Holy Communion and lives a Christian life), such fears cannot touch them. Let us profess this before all, starting with ourselves. Let us try to love our Lord Jesus Christ even more, so the fear of death (or anything else) will leave us, since “There is no fear in love; but perfect love casts out fear” (1 John 4:18). When the time of our departure comes, not only will this fear be gone, but in its place will be a joyful peace. Like Symeon and so many Saints, we will go to live an eternal life with our Christ! Amen.