Greek Church music is a taste that many of those not born in Greece ever acquire. There are, however, some hymns which appeal more directly to non-Greek ears and this is one of them. In this version, sung by the nuns of the Holy Monastery of the Annunciation, Ormylia, Halkidiki, some of the verses have been omitted. The translation follows the abbreviated version used on this recording. 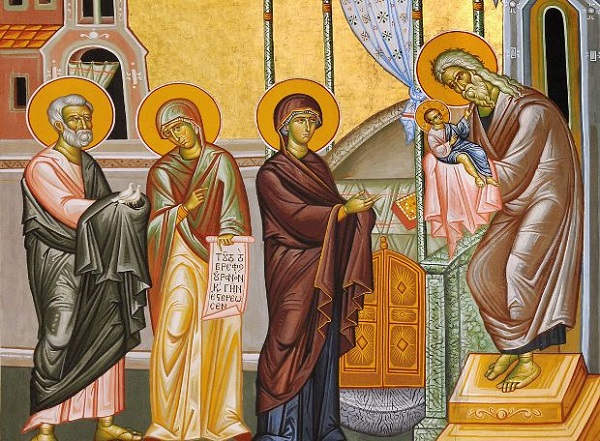 Pure Virgin Mother, that which has been completed in you is incomprehensible to angels and mortals alike.

Symeon the Elder cradles the Maker of the Law and Master of all.

Wishing to save Adam, the Creator dwelt in the womb of the Pure Virgin.

The whole race of mortals blesses you, Pure One, and glorifies you in faith as Mother of God.

You look down upon the earth and make it tremble. How can I, aged and weary, hold You in my arms.

Conceiving Christ, the Coal, in your womb, you, Mary, are the mystic Tongs.

Symeon the priest received the Lord of all come down from heaven.

Brighten my soul and the light of my senses that I may see You in purity and declare You to be God.

Pure Virgin Mother, why do you bring a new-born babe into the temple and commit Him into Symeon’s arms?

I now seek dismissal from You, the Creator; for I have seen Christ my saving Light.

In the shadow and letter of the Law, let us the faithful discern a figure: every male child who opens the womb is sanctified to God. Therefore we magnify the first-born Word, Son of the Father without beginning, the first-born of a Mother who had not known a man.

He, Whom the Ministers above entreat with trembling, is now received below into the arms of Symeon.

Formerly, a pair of doves and two young pigeons were offered. In their place, the godly elder and Anna the sober-minded prophetess magnified and ministered to the Child of the Virgin, the Only-begotten Son of the Father, when He was brought into the temple.

Glory to the Father and to the Son and to the Holy Spirit.One in nature but three in Persons, guard Your servants who trust in You.

Symeon cried: ‘You have given me the joy of Your salvation, Christ. Take Your servant who is weary of the shadow and make of him a new preacher of the mystery of grace, as he magnifies You in praise’.

Both now and ever and unto the ages of ages, Amen. Mother of God, the hope of all Christians, protect, watch over and guard those who hope in you.

With reverence, holy, sober-minded and venerable Anna openly confessed the Lord in the temple. And proclaiming the Mother of God, she magnified her to all those present.