10. According to the Gospel for Meat-Fare Sunday all our affairs will be displayed for judgement. It says: ‘When the Son of Man comes in his glory, and all the angels with him’. At his first coming, the glory of his divinity was hidden by the flesh he took from us, for us, which is now hidden with the Father in heaven, together with his divine flesh. But then he will reveal his glory in its fulness. He will be radiant, visible from east to west, illumining all things with the rays of his divinity. All over the world, the sound of the life-giving trumpet will be heard everywhere and, at the same time, all things will be summoned to him. He did, indeed, have angels with him earlier, but imperceptibly. He restrained their zeal against God’s opponents, but later he will come openly and will not be silent, but will chastise the disobedient and deliver them for punishment. 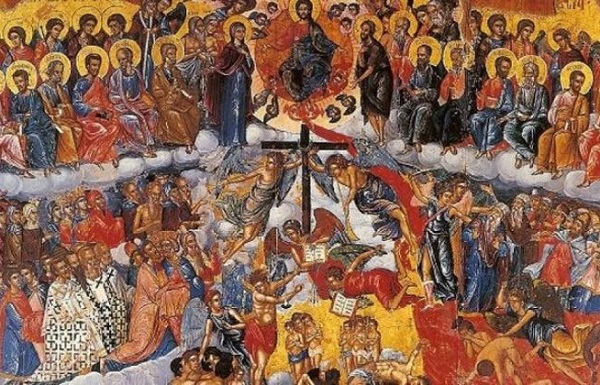 11. ‘When the Son of Man comes in his glory, and all the angels with him, he will sit on the throne of his glory’. This is what the prophet Daniel foresaw and foretold: ‘Behold, thrones were set in place and the Ancient of Days took his throne… and I saw one like the Son of Man coming with the clouds of heaven. And he came to the Ancient of Days…and to him was given dominion and glory…And thousand thousands served him, and ten thousand times ten thousand stood attending him’. In agreement with this, the Gospel says: ‘All the nations will be gathered before him, and he will separate people one from another as a shepherd separates the sheep from the goats’. ‘Sheep’ is the name given to the righteous, who are meek and gentle-hearted; who tread the level path of the virtues which he himself walked; who are like him because he, too, was called the Lamb, by the Forerunner and Baptist, who said: ‘Behold the Lamb of God, who takes away the sin of the world’. The others are called goats, since they are over-bold and unruly and rush towards the precipices of sin. The Gospel goes on to say that the first will be set on his right hand, for having acted rightly, but the others will be placed on the left, for not having done so. ‘Then the king will say’. He does not specify which king or of whom he is king, because there is no other. Only one is Lord, one is King, he who, by nature is the Lord of all. Then the one and only king will say to those on his right hand: ‘Come, you that are blessed by my Father, inherit the kingdom prepared for you from the foundation of the world’.

12. Indeed, this was foreseen from the initial formation of the world and the heavenly and most ancient will of the Father bent towards this purpose from the very beginning. The Angel of the Father’s Great Counsel made us as living creatures in his own image and likeness: so that at some stage we might contain the greatness of God’s kingdom, the bliss of God’s inheritance and the perfection of the heavenly Father’s blessing, through which all things visible and invisible were made. The reference is to ‘the world’, not the visible one, but the world without specific determination, the heavenly as well as the earthly. Even the indescribable divine self-emptying, Christ’s life as God and a human person, the saving passion, all the sacraments, all of this was planned in advance through God’s providence and wisdom. And for this purpose: so that everyone who proves to be faithful in the present will hear the Savior say: ‘Well done, good and faithful servant; you have been trustworthy in a few things, I will put you in charge of many; enter into the joy of your master’. He says: ‘Come, you who have made good use of the earthly, perishable and transitory world as I wished and inherit also the enduring, heavenly world which is imminent’. ‘For I was hungry and you gave me food; I was thirsty and you gave me drink; I was a stranger and you took me in; naked and you clothed me; I was sick and you visited me; I was in prison and you came to me’.

… 15. The Lord therefore grants his inheritance to those who have sealed the other virtues with deeds of love. To people who have either ascended to love through a blameless life or who have fled to it for refuge, through repentance. Those who have kept intact the mystical rebirth which comes from God I designate as ‘children’, while those who have been recalled to grace as a reward for labors of repentance and humility are ‘hired workers’.