On March 17, we celebrate the memory of Saint Patrick, the patron saint of Ireland

Dismissal Hymn in the third tone:

‘Holy Hierarch, equal of the Apostles, Saint Patrick, wonderworker and enlightener of Ireland: Intercede with the merciful God that will He grant to our souls forgiveness of offences’.

A dismissal hymn indicates why we honor a saint, but is not an account of his or her life. In this case, ‘enlightener of Ireland’ does not give us any indication of what this entailed. 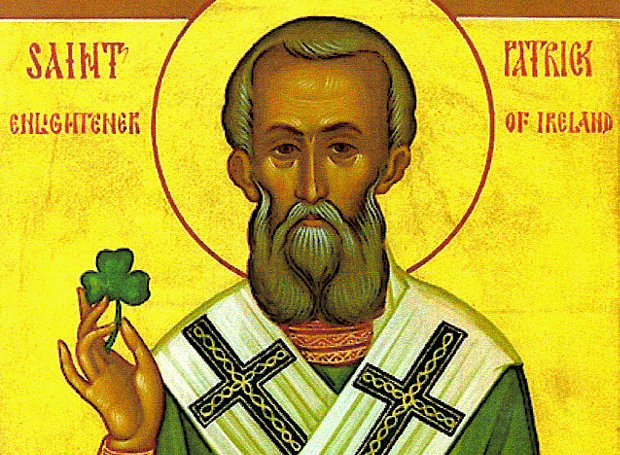 The best known written work we have by Saint Patrick is his ‘Breastplate’ or ‘Lorica’. It is by no means certain that Saint Patrick wrote it himself, though this does not mean that he didn’t. The earliest manuscript we have is written in Old Irish and, from linguistic evidence, Irish scholars date it to the 8th century, three centuries after Patrick. Another piece of writing, however, is certainly by him: his letter to the soldiers of Coroticus, composed in Latin and, as the saint says, ‘in my own hand’ (manu mea scripsi).

Despite his protestation that he is ‘unlearned’, Patrick had been well-educated in monasteries in Europe, as can be seen from the many references in the text. Though less well known than the ‘Breastplate’, the Epistola gives us a framework for that text. The ‘Breastplate’ is a prayer for protection and an affirmation of love for and trust in God. The Epistola tells of Patrick’s utter dismay at the massacre of newly-baptized Christians by the soldiers of Coroticus, who were themselves Christian but outside his jurisdiction.

Letter to the soldiers of Coroticus

1 I declare that I, Patrick, – an unlearned sinner indeed – have been established a bishop in Ireland. I hold quite certainly that what I am, I have accepted from God.[cf. 1 Cor. 15, 10]. I live as an alien among non-Roman peoples, an exile on account of the love of God – he is my witness that this is so. It is not that I would choose to let anything so blunt and harsh come from my mouth, but I am driven by the zeal for God. And the truth of Christ stimulates me, for love of neighbors and children: for these, I have given up my homeland and my parents, and my very life to death, if I am worthy of that. I live for my God, to teach these peoples, even if I am despised by some.

2 With my own hand [cf. St. Paul] I have written and put together these words to be given and handed on and sent to the soldiers of Coroticus. I cannot say that they are my fellow-citizens, nor fellow-citizens of the saints of Rome, but fellow-citizens of demons, because of their evil works. By their hostile ways they live in death, allies of the apostate Scots and Picts. They are blood-stained: blood-stained with the blood of innocent Christians, whose numbers I have given birth to in God and confirmed in Christ.

3 The newly baptized and anointed were dressed in white robes; the anointing was still to be seen clearly on their foreheads when they were cruelly slain and sacrificed by the sword of the ones I referred to above. On the day after that, I sent a letter by a holy priest (whom I had taught from infancy), with clerics, to ask that they return to us some of the booty or the baptized prisoners they had captured. They scoffed at them.

4 So I do not know which is the cause of the greatest grief for me: whether those who were slain, or those who were captured, or those whom the devil so deeply ensnared. They will face the eternal pains of Gehenna equally with the devil; because whoever commits sin is rightly called a slave and a son of the devil [Jn. 8, 34; 44].

5 For this reason, let every God-fearing person know that those people are alien to me and to Christ my God, for whom I am an ambassador [Eph. 6, 20]: father-slayers, brother-slayers, they are savage wolves devouring the people of God as they would bread for food [Ps. 13, 4]. It is just as it is said: ‘The wicked have routed your law, O Lord’ [Ps. 118,126] – the very law which in recent times he so graciously planted in Ireland and, with God’s help, has taken root.

6 I am not forcing myself in where I have no right to act. I have a part with those whom God called and destined to preach the gospel, even in persecutions which are no small matter, to the very ends of the earth. This is despite the malice of the Enemy through the tyranny of Coroticus, who respects neither God, nor his priests whom God chose and granted the divine and sublime power that whatever they would bind upon earth would be bound also in the heavens [Matth. 16, 19; 18, 18].

7 Therefore I ask most of all that all the holy and humble of heart should not fawn on such people, nor even share food or drink with them, nor accept their alms, until such time as they make satisfaction to God in severe penance and shedding of tears, and until they set free the men-servants of God and the baptized women servants of Christ, for whom he died and was crucified.

8 The Most High does not accept the gifts of evildoers. The one who offers a sacrifice taken from what belongs to the poor is like one who sacrifices a child in the very sight of the child’s father [Sir. 34, 19-20]. Riches, says Scripture, which a person gathers unjustly, will be vomited out of that person’s stomach. The angel of death will drag such a one away, to be crushed by the anger of dragons. Such a one will the tongue of a serpent slay, and the fire which cannot be extinguished will consume [Job 20, 15; 16; 26]. And Scripture also says: ‘Woe to those who fill themselves with what does not belong to them’ [Hab. 2, 6]. And: ‘What does it profit a person to gain the whole world and yet suffer the loss of his or her soul?’ [Matth. 16, 26].

9 It would take a long time to discuss or refer one by one, and to gather from the whole law all that is stated about such greed. Avarice is a deadly crime [cf. Luke 12, 15]. Do not covet your neighbor’s goods. Do not kill. The murderer can have no part with Christ. Whoever hates a brother is guilty of homicide. Also: Whoever does not love a brother remains in death [cf. 1 Jn. 3, 14] How much more guilty is the one who stained his hands in the blood of the children of God, who God only lately acquired in the most distant parts of the earth through the encouragement of one as unimportant as I am!

10 Surely it was not without God, or simply out of human motives, that I came to Ireland [cf. 1 Cor. 1, 17]. Who was it who drove me to it? I am so bound by the Spirit that I no longer see my own kindred. Is it just from myself that comes the holy mercy in how I act towards that people who at one time took me captive and slaughtered the men and women servants in my father’s home? In my human nature I was born free, in that I was born of a decurion father. But I sold out my noble state for the sake of others – and I am not ashamed of that, nor do I repent of it. Now, in Christ, I am a slave of a foreign people, for the sake of the indescribable glory of eternal life which is in Christ Jesus our Lord [Rom. 6, 23].