The Boundaries between Orthodoxy and Heresy – Saint Gregory Palamas (2)

Iconoclasm was a form of religious ideology, which cast doubt on and, in the end, rejected the fact of God’s incarnation, which is the prerequisite for the renewal of the world and of our own glorification. If Christ cannot be depicted, this means that he was not a real human person. The icon of Christ declares and emphasizes the truth of divine incarnation. It highlights the presence of God Who came into the world in order to save us.

All the ancient heresies which made their appearance in the first millennium after Christ were dealt with by the seven Ecumenical Synods. The victory of Orthodoxy, which is celebrated by the Church on the first Sunday of Great Lent is presented as a triumph over these heresies which cast doubt on our salvation as this was offered to us by God. 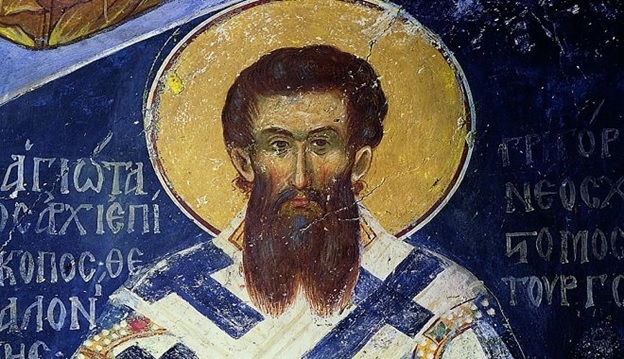 The second Sunday in Great Lent is an extension of the Sunday of Orthodoxy. On this Sunday, we celebrate the victory over another kind of heresy, one that cast doubt on our salvation on a second level, on the way we receive and accept it. The leading champion of the Church in the fight against this heresy was Saint Gregory Palamas, Archbishop of Thessaloniki.

Saint Gregory Palamas was born in 1296, of devout and affluent parents. At the age of seven, Gregory lost his father and the emperor himself took over the responsibility for his education, which meant that he was destined for high public office. At the same time however, within the bosom of his family, he also became familiar with the ascetic life and was taught the Jesus Prayer by Theoliptos, an Athonite monk and later Metropolitan of Philadelphia. Although the emperor aimed to prepare him for high public office, he himself  preferred the monastic life.

In the autumn of 1316, at the age of twenty, he left for the Holy Mountain, together with his two younger brothers, Makarios and Theodosios. For the first three years of his stay there, he was under the spiritual guidance of the ascetic Nikodimos, at the boundary of the lands of the Holy Monastery of Vatopaidi. On the death of Nikodimos, he moved to the coenobitic monastery of the Great Lavra and then withdrew to a hermitage.

In 1325, raids by the Turks forced Palamas and other Athonites to leave the Holy Mountain. He went to a hermitage in the Skete of Veria, where he lived for some five years in the strictest asceticism. In 1331, raids by the Serbs forced him to leave Veria region and return to the Holy Mountain, where he continued his life as a hermit in the cell of Saint Savva. It was here he learned about the views of Barlaam, a theologian and philosopher from Calabria, in Southern Italy.

Barlaam was Orthodox and accepted  all the dogmas of the Church as these had been formulated by the seven Ecumenical Synods. So he did not exhibit heretical views on the first of the two levels we mentioned, but on the second: on that of how we accept and receive God’s salvation. Barlaam did not say that Christ and the Holy Spirit are created, as claimed by the Arians and the Pneumatomachi, but he did claim that God’s energy, that is His grace, by which we are saved, is created. This, however, would mean, again, that we cannot enter into a  direct personal relationship with God and we are not united with Him but rather with some kind of created entity. As regards our salvation, this claim is tantamount to what the Arians and Pneumatomachi asserted.

Our salvation is an ontological fact. In other words, it is a fact that envelopes the whole of our existence and is made real by our direct, personal union and communion with God. It is the transmission of the divine life which we lost through our apostasy from Him. We are not saved by learning certain truths or acquiring theological knowledge concerning God. And God does not save us by telling us information about Himself, but by coming to us as a person, though remaining the God He is. He saves us through His life and death, through the Cross and His resurrection.

The whole of the mystery of God’s providence regarding our salvation is summed up by Saint Paul, when he says: ‘the mystery from which true godliness springs is great. God appeared in the flesh, was vindicated by the Spirit, was seen by angels, was preached among the nations, was believed on in the world, was taken up in glory’. This mystery is experienced in the spiritual world of the Church. In essence, this mystery is identical with the mystery of the Church. This is why the Church, which is our initiation into union and communion with God, is called ‘the communion of deification’ by Saint Gregory Palamas.