Repentance, as I learned it from contemporary Saints and Elders (Part 2)

Then you can forgive others, as we said above.

So you receive the remission of sins in prayer first and this is necessary so that you can go to your spiritual guide for confession and to receive forgiveness from the Church.

Then you’ll also receive it from holy communion. In this way the remission of sins is completed: repentance in prayer, confession and holy communion

You’ll receive it in prayer because you’re baptized and repent. Don’t we say: ‘I confess one baptism for the remission of sins?’ 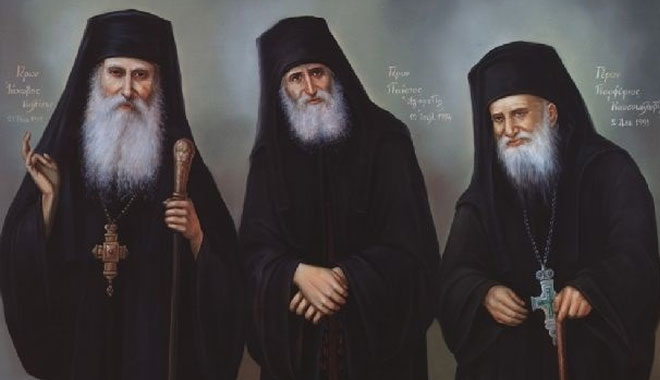 The remission of sins is given with baptism, confession and holy communion, but is activated only by conscious repentance. Without repentance, there’s no activation of the sacraments of the Church, which cure people and sanctify them, since they unite them to Christ.

The sacraments of baptism, confession and holy communion offer us remission, that is liberation from enslavement to sin, and give us the opportunity for purification, enlightenment and glorification. With repentance in prayer which is said carefully and continually, without ceasing, there comes purification, enlightenment and deification, because repentance is the activation of our freedom towards the love of God by the rejection of sin.

The unceasing prayer: ‘Lord, Jesus Christ, have mercy upon me’ means unceasing recollection of sin and an unceasing quest for remission from Christ.

There’s a spiritual child of the holy Elder Antonios Ghikiza, the spiritual father of Saint Porfyrios, who has preserved for us the central focus of the latter’s life: repentance. The saint’s love of repentance is evident in the will he left for his spiritual children.

The following story has to do with the holy Elder Iakovos Tsalikis. Some time around 1983, I went to the Holy Monastery of Saint David, because I felt the need to confess to Elder Iakovos. When he’d read the prayer of forgiveness over me, all by himself, without any prompting at all from me, he told me: ‘Andreas, most people come to the monastery without having repented. Of course, the spiritual guide has his job to do in confession, to help the faithful to repent, then to confess and have the prayer of forgiveness read over them. At holy communion, though, they’re by themselves, before Christ and they have to come forward with contrition and repentance over their sins. God gave me the gift of seeing those coming for communion without repenting as being black, while those who repent are shining.

So one time I saw a young man coming forward for communion and he was completely black. When he reached the chalice, I said to myself: “Iakovos, who are you to judge him?”.
I made a mistake and gave him communion. When I was putting the spoon into his mouth, I saw a spark leaving the spoon and returning to the chalice.

I was speechless. He hadn’t repented and didn’t get communion!

God taught me that without repentance not even the faithful should come to communion. Nor should the priest allow them to, if he knows, of course. The first responsibility of spiritual guides is to teach repentance and to give the sacraments of remission of sins and holy communion only to those who have repented’.