Sustenance for the Strong

After those who came to be baptized in the ancient Church, the whole of their life was imbued with a godly passion for holy communion. Allegorical symbols of the heavenly food of the faithful filled places of worship, especially in the catacombs. Images of the true vine, of the panting hart which runs to ‘the springs of water’. In the crypt of Lucina there are depictions of fish and baskets with bread for holy communion. An epigraph in Latin states: ‘Love, pour me wine’. In the Greek chapel of the catacomb of Priscilla, a wall-painting from the 2nd century depicts the ‘breaking of the bread’. The priest is dividing the bread. Before him is a chalice and around him six other people are sitting at a table on which there are loaves and fish. Elsewhere we see the holy gifts on a tripod waiting to be blessed by a man while a woman prays beside him. Another illustration shows the Good Shepherd with a vessel, which recalls the vision of Saint Perpetua. A chalice has also been found in the catacombs, most likely from the divine Eucharist, inscribed: ‘Drink (and) you will live well’. 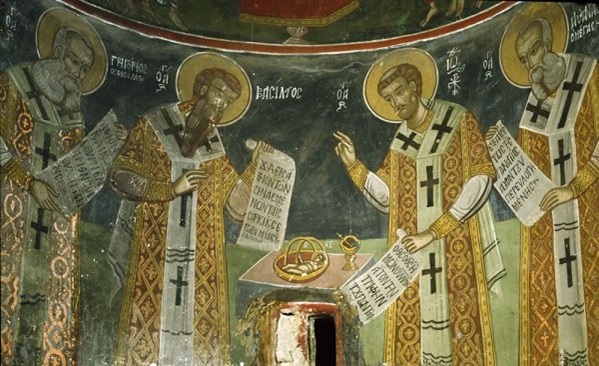 Desire for the sacrament is portrayed everywhere with mystical symbols, in order to hide the real meaning from the pagans. In another wonderful inscription from 2nd century Asia Minor, we read about a mystical fish ‘mighty, pure, which the spotless Virgin caught and gave to the friends to eat for ever, giving good wine and bread as refreshment’. Indeed, the ancient Church offered the heavenly fish, who was given birth by the Virgin, to be eaten by ‘friends’, as Christians were often called.

The desire for frequent communion was a living reality. What was recommended by Saint Ignatios to the Ephesians (‘Make sure you come more frequently to the Eucharist of God’) can be seen in the everyday life of ancient Christians. They took communion not only every Sunday, but on weekdays, as well. Every time the priest emerged through the royal doors with the precious gifts and invited the faithful to approach ‘with fear of God, faith and love’, everyone in the thirsting crowd went with divine longing to the source of life. They went in the order appointed in the ancient liturgies: first the bishop, then the priests and deacons, followed by the readers, the singers, the monks, the deaconesses, the nuns, the widows, the children, as being most pure,  and then ‘all the people’, as the ancient text puts it.

As they approached the chalice of life, they quietly sang the communion hymn: ‘I will bless the Lord at all times, his praise forever in my mouth’ (Ps. 33). Then came the beautiful invitation: ‘Taste and see that the Lord is good’ and other psalms. Tears flowed from the eyes of the faithful as they came and sang. Tears of joy and exultation.  Now they were tasting that the Lord is good. They were taking provisions in order to continue their struggle.

In the account in his 1st Apologia, Justin tells us how the holy liturgy was celebrated. He ends as follows: ‘And to those who were not present, it was sent with deacons. They didn’t forget those who were absent with just cause, such as, for example, the sick. Above all, however, those who had need of the ‘medicine of eternity’ were people imprisoned for the faith, who were about to undertake the trial of martyrdom. How inexpressible their joy must have been when they received the heavenly Bridegroom in prison. But those heroic deacons who took the precious gifts to prisons are equally deserving of attention. Young Tarsisius was killed on the Appian Way, a victim of barbaric Romans, because he refused to surrender his treasure to them.

Tarsisius symbolizes the whole of ancient Christianity. He lived and fought and created a culture down in the catacombs, thanks to the priceless sustenance of the divine Eucharist. This was his life and his unassailable power. This was the everyday Easter of his mystical joy. The center and foundation of his life in Christ. Through it, he was buried with Christ and rose with him triumphantly in an indissoluble union.

‘We cannot live without celebrating the holy supper. There can be no Christians without the divine Eucharist’. This was the great declaration of the martyrs of Carthage to Proconsul Antoninus [Anulinus] (11 February, 304)* and reflects the unanimous sentiments of Christians in the first centuries.

The example of these martyrs condemns the sloth with which many Christians in this age celebrate the Lord’s Day. When the judge asked them, how they durst presume to hold their assembly against the imperial orders, they always repeated, even on the rack: ‘The obligation of the Sunday is indispensable. It is not lawful for us to omit the duty of that day. We celebrated it as well as we could. We never passed a Sunday without meeting at our assembly. We will keep the commandments of God at the expense of our lives’. [WJL].