The Boundaries between Orthodoxy and Heresy – Saint Gregory Palamas (3)

‘Communion of deification’ means a society of people that prepares and produces gods, gods by grace. This was, in any case, God’s pre-eternal plan for us, as is clear from the fact that we were made ‘in His likeness’. We were to become like Him and share in the grace of the Triune God. The implementation of this plan, however, requires our consent and co-operation. God endowed us with freedom and does not impose anything on us by force. This is why God’s aim for us is served only through our willing cooperation. Since we became distorted through our apostasy from God, we need to strive, by God’s grace, to find our true self again and to proceed with His plan for us. This is the effort to which the Church calls each of us in the season of Great Lent.

Saint Gregory Palamas is an outstanding guide for the successful completion of this struggle. Above all else, this great theologian of our Church teaches how important it is for us to regain our true self, to bring it to God and to be prepared to receive the great gift of salvation which God offers us. He teaches us how important it is to look deeply into our inner self, to bring our disordered nous back into the heart and to listen to Christ’s invitation: ‘Behold, I stand at the door and knock. If anyone hears my voice and opens the door, I will come in to them and dine with them, and they with me’. It was these truths and this way of life that Saint Gregory Palamas defended against Barlaam. It was these truths and this way of life that were doubted and attacked by Barlaam and like-minded thinkers. 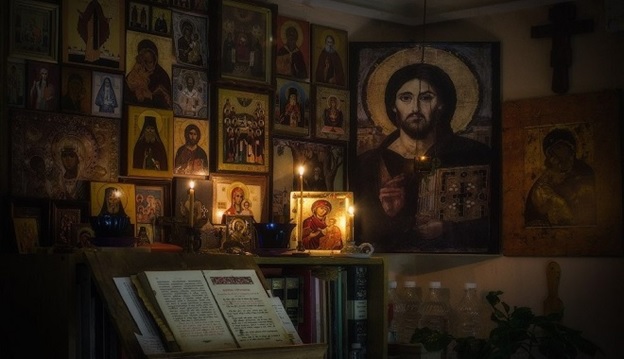 We might say that, with Barlaam’s teaching, we did not merely have an ordinary heresy, but a complete disruption and dismissal of the gift of divine providence. Saint Gregory uses the words of Saint Symeon the New Theologian regarding a similar phenomenon from the latter’s own time. He says it is a teaching which: ‘disrupts the whole of the providence of our God and Lord, Jesus Christ and clearly denies the renewal of the debased image…’.

Saint Gregory Palamas defended the authentic tradition of the Church, which was, initially common to both the East and the West. He strove to remove the divergences which had occurred as a result of the schism. He fought against Barlaam’s teaching that the energy or grace of God is created and emphasized that, through His uncreated grace, God comes into personal contact with us, is united to us and deifies us. In this way he promoted Christianity without misrepresentation, he supported Orthodoxy and kept open the path for our deification.

The breach between the Christian life and the Church which has occurred in modern times has distorted Christianity and favored secularization. And since secularization arose and became confirmed in the West, thereafter being imported into the East, it is not difficult to understand the leading role which Westerners play in this situation. This is why the secular societies in the East are naturally at a disadvantage as regards the secular societies of the West and need to follow them all the time, willingly being painted into corners. We have disdained our own, authentic roots; we have denied our spiritual riches; we have forgotten our transcendent goal; and we have preferred to modernize, wandering barefoot on the thorns of secularization.

At a critical turning-point in history, through his life and teaching Saint Gregory Palamas brought enormous riches to the Greek nation and the Church, not only at the time in which he lived but also throughout the dark period of Turkish rule which followed. Today, also, his person and his teaching are a most valuable chapter which is offered for our support and creative progress into the future. For our progress within history, for our dialogue with the Christian and non-Christian world of our globalized and vitiated society.
In conclusion, I would like to make two observations which are particularly important and apt today. One has to do with the life of Saint Gregory, the other with his teaching.

When Palamas was consecrated Archbishop of Thessaloniki in Constantinople, he went to the city to take up his appointment, but was met with a revolt by the Zealots, who prevented him from entering. Palamas peacefully retired to the Holy Mountain, where he lived as a monk for about a year. Because of ongoing civil conflicts and the rebellion of the Zealots, the king of the Serbs, Stefan Dušan, took the opportunity to expand his authority over a large part of Macedonia. He visited the Holy Mountain and attempted to win over the archbishop who had been excluded from his throne. He made him flattering promises of political power, large jurisdictions, and a great deal of money. To which the impecunious hierarch gave the following noble answer:

‘I have no need of powers, jurisdictions and a great deal of money. If you take a sponge that will absorb a tumbler of water and throw it into the Aegean Sea, it will never absorb the boundless ocean, but will take in only a tumblerful of water; that is, its natural capacity. The rest will be ignored. I long ago learned and it has now become second-nature to me, to live on little and only what is necessary. Were you to give me all the gold on earth, and what lies beneath the earth, even if you took me and doused me in the water of the mythical River Paktalos, I would take no more than my daily food and the necessities. So I neither need nor am interested in discussions about your great gifts and monetary provisions’.

The other observation, as we said, has to do with his teaching. As the ‘preacher of grace’, Saint Gregory emphasized that God’s energy, his grace, through which we are saved, is not created. In other words, God does not save us through some created means that is inserted between Him and us, but rather He comes directly into personal contact and union with us. By the same token, we have to approach God directly and personally. This is why prayer, which was at the center of his conflict with Barlaam, is not merely a remembrance of God or a motion of the human mind towards Him, as Barlaam claimed, but is personal union and communion with Him, culminating in Holy Communion.

Prayer means reference to a person. When we pray, we truly feel the presence of the person to whom we are addressing our prayer. Especially the Jesus Prayer- ‘Lord Jesus Christ, have mercy upon me’- which Palamas claimed should be permanently on the lips of all believers. For our own day and age it is his main injunction and counsel for our rectification and the restitution of our communion with God and other people.