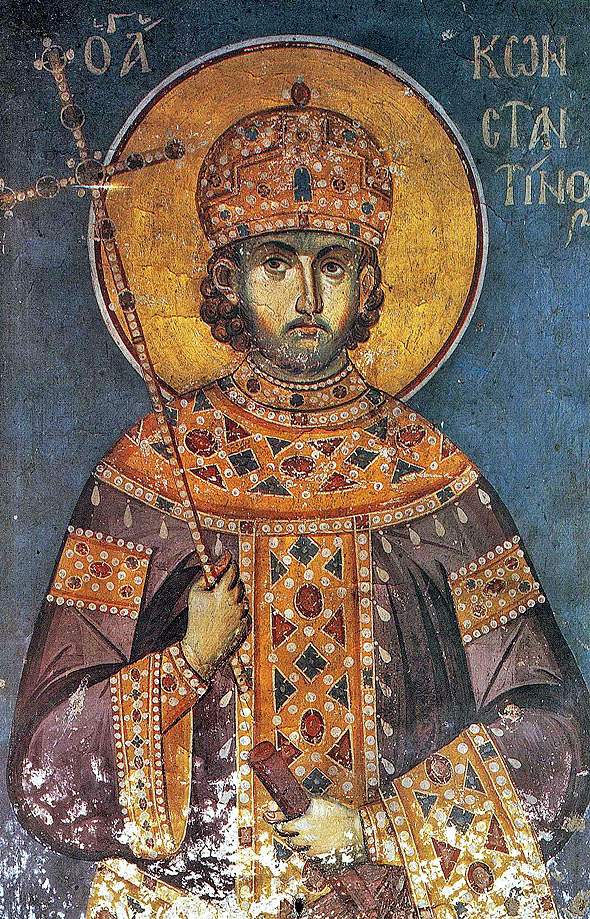 The very name of Constantine is enough to move the heart of any Greek Christian, not only today, but for very many years now, because it is associated with the legends of the nation, with “again, all in good time, it will be ours again”[1]. It moves us because the first to bear the name Constantine I, the Great, was not merely one of the greatest men in world history, but he was something more besides: a saint.

And when they hear the word “saint”, the trumpeters of atheism and unbelief start to sound off. Is he a saint? General, yes. King and Emperor, yes. Great, yes. But saint? No, he’s not a saint, they say. Because, they say, Constantine the Great committed crimes: he killed his son Crispus; he killed his second wife Fausta; and so shouldn’t be considered a saint*.

What can we say in response to those who are against Constantine the Great for no other reason than that he was a Christian? Had he not been a Christian, but an idolater like Julian the Apostate, who betrayed the Church, then they would be praising him. But, no. Constantine, who supported the Orthodox faith and established firm foundations, is slandered and hated by the enemies of Christ.

We would answer: they either forget or do not know that, in our faith, there is a great thing called repentance. One tear from a sinner, whatever act they’ve committed, one tear at the sacrament of confession, redeems any fault. Were there no repentance, paradise would be empty, we wouldn’t have a calendar of feasts nor any saints, because there isn’t a saint who hasn’t cried and hasn’t repented sins. There’s no other way to Paradise, beloved, than the door of repentance. Constantine wasn’t born a saint, he became one. He made mistakes, but he repented. Let’s not forget that he was brought up in the inhuman surroundings of the courts of Diocletian and Galerius, yet he disagreed with people like them.

He’s a saint because his presence in the world is the light of Christ. This light is also shown in his call, which is remarkably like that of Saint Paul and which is why it is mentioned in his dismissal hymn. Saint Paul was called by Christ in a vision when he was walking along the road to Damascus; he saw a shining light and heard a voice saying: “Saul, Saul, why are you persecuting me?” In the same way, Saint Constantine was called in a vision. A historic vision which is reported by contemporary historians[2]. What was the vision? When he arrived outside Rome on 28 October, in the year  312 A. D., the army of his rival was three times larger and defeat stared him in the face. As he sat there pondering, in broad daylight, he saw a great sign: the stars in the heavens formed a cross and below the cross he saw the words: “In this conquer” (In hoc vinca). And from that moment on, he was convinced that the future of humanity rested with Christ. He then adopted the banner which proceeded his troops and, with this sign, “In this conquer”, he defeated Maxentius, entered Rome and proclaimed to the whole city that this victory did not belong to his legions but to the Honourable Cross.

His edicts are light. The first edict, in February, 313, was for the persecutions to cease. Just imagine. The persecution of Christians had lasted 300 years. It was forbidden to be Christian. The very word “Christian” was cause enough for conviction, nothing else needed to be investigated: “Are you Christian?”. That was it. Possessions confiscated, incredible sufferings, horrifying tortures. How many martyrs? 12 million. For 300 years, Christians begged: “Lord, give us peace”. And He did. Peace came into the world through the chosen vessel of divine providence[3], Constantine the Great.

How, then, can we not honour him? We ought to do so if for nothing other than that edict which he signed with his holy hands. His nobility of soul and forgiving nature were also light. They say that some idolater enemies once decapitated a statue of him. When the news was brought to him he raised his hands, took hold of his head and said: “This is my head here. There’s nothing missing. Don’t punish them”. On another occasion he said that if he saw a cleric sinning, he would cover him with his robes, so as to prevent other people seeing his sins. This showed his intense concern that the Church should not be subjected to scandals.

He abolished the worship of the Roman emperors, who were considered gods on earth.

His legislation was also light. For the first time, Christian legislation was introduced. His vision was rare. What vision? To make a Christian state, on a global scale, and offer it to Christ for sanctification and deification. This is why he’s depicted holding an orb. And just as the Patriarch Abraham heard the voice of God telling him to leave his homeland and settle in a land that God would show him (Gen. 12, 1), so, too, Saint Constantine left Old Rome, the city stained with the blood of innocent Christians criminally killed, and built a New Rome on the Bosphorus, which, after his repose, was quite rightly called Constantinople. And from here he took measures aimed at raising the spiritual state and sanctity of the people.

What measures? He closed all the night-time places of corrupt pleasure. There were places of entertainment where women gathered under the protection of disgusting divinities, Aphrodite centres, Bacchus centres and he closed them all. He closed the oracles and got rid of the magicians who were exploiting people and deceiving them. He forbade blasphemy. He said he would forgive anything, except blasphemy. If anyone blasphemed the name of Christ, they were immediately arrested and exiled.

He honoured Sunday by edict. He declared it a great and splendid day and forbade any shops to open. Horse races, places of relaxation, everything closed.

He supported small land-holders and workers and took measures against usury and every of other form of  injustice. He was the first to support human rights, he protected widows and orphans, and showed particular concern  for social welfare.

He protected the Orthodox faith. When Arius, the leader of the heresy named after him, came along and opened his dirty mouth against our Lord, Jesus Christ, and said that He was not really God and of the same substance as the Father, Constantine convened the First Ecumenical Synod in Nicaea, Bithynia, to write the Creed. He himself went to the convention, not as emperor and ruler of the planet, but in humility and kissed the hands of the holy bishops, many of whom still had the marks of their mistreatment fresh on their bodies. Not being a theologian, when he was asked for his opinion, he replied: “I respect what I do not know”.

He supported missionary work. It was during his time as emperor that the Armenians and Georgians became Christians, and the light of Christ reached as far as India.

It was at his command that the Honourable Cross was found an d the first churches were built in Jerusalem. He was the initiator and founder of a Christian Empire that lasted one thousand one hundred years.

Finally, beloved, when he realized that his earthly end was approaching, he surrounded himself with bishops and confessed his sins and wept. He was then baptized, at the age of about 63, and never again put on the royal robes, the splendid imperial vestments, but wore only his white baptismal robes, telling people that he now really did feel like an emperor. He took communion, the Body and Blood of Christ, and, pure and clean, rejoicing and praying, departed for the heavenly kingdom.

Beloved, even if we ignore all the above, there are two criteria for the Church regarding his sanctity: a) the vision of God and the grace which the saint enjoyed, as we have mentioned; b) his miracles after death.

After his departure from this life, his sacred relics were buried with imperial honours in the narthex of the church of the Holy Apostles, where they gave off a powerful aroma and myrrh and performed many miracles[4]. It may be that some people wonder whether what the Christians say is really the truth. Beloved, even if some people don’t believe, there are two criteria for his sanctity and only two. It is with the seal of God that Constantine is a saint and Equal to the Apostles. History has shown him to be great and the Church to be a saint.

[1] Words attributed to Konstantinos XI Palaiologos in a poem about the capture of Constantinople (trans. note).

* The truth of the matter is as follows: when Constantine the Great was Caesar in the West, Rome proclaimed the cruel, anti-Christian, Maxentius, as emperor, who wishing to cover his back in the west, since he feared Constantine, forced him to divorce his wife, Minervina and marry Fausta, a very ambitious and cunning woman who was also Maxentius’ sister, in order to control him. When she saw Constantine’s eldest son, Crispus, distinguishing himself in battles and being groomed for the succession, she wanted to destroy him at all costs, in order to promote her own three sons to positions of power. So she slandered Crispus by saying that he had tried to rape her and kill his father in order to seize power, like a new Absalom. Unfortunately, Fausta’s plot was so convincing and her lies so persuasive that Constantine and the generals fell into the demonic trap. And they allowed Crispus to be put to death, in accordance with the law. When the queen mother, (Saint) Helen, who was many miles away, learned what had happened she rebuked her son severely for his decision. Constantine instituted exhaustive enquiries, from which it became clear that he was the victim of a criminal conspiracy on the part of his wife, Fausta, and her supporters. So he ordered that she, too, be put to death. These two murders of people of his own family greatly distressed Constantine, who regretted them bitterly to the end of his days and sought God’s forgiveness. And I order to show his repentance publicly he had a statue erected to Crispus, with the inscription “To my much-wronged son”.

[3] In his book “The Ecumenical Synods”, Saint Nektarios writes that Saints Constantine and Helen were the hands of divine providence.

[4] See the calendar of the Church.