The First-Fruit of the New World

The Gospel reading for the Sunday of the Myrrh-Bearing Women (Mark 15, 43-47; 16, 1-8) relates two important events: the burial of Jesus’ body by Joseph (15, 43-47) and the visit of the myrrh-bearing women to the empty tomb (16, 1-8). The burial is the last act of the drama of the crucifixion, with which the cycle of the earthly ministry of Jesus comes to an end. The Resurrection is the first-fruit of a new world which is offered to us. 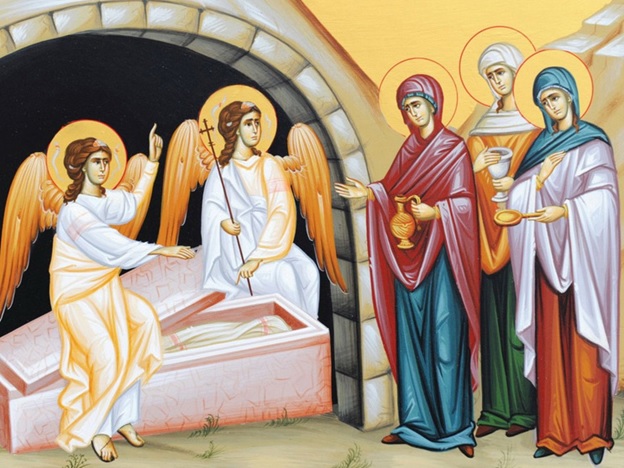 Before looking at the second narrative, let’s turn our attention briefly to the person of Joseph, who occupied a high position in society (‘a prominent member of the council’) and belonged among those who secretly were hoping for the coming of the Reign of God. In his parallel narrative, Saint John says about Joseph that ‘he was a disciple of Jesus’, though in secret, because he feared the Jews’.  Joseph acted together with Nicodemus, another hidden disciple. At the moment when the other, well-known disciples were terrified and disheartened because of the crucifixion of their teacher and were cowering in a house, Joseph dared to go to Pilate and ask for the body of Jesus. A desire arose within him to pay his last respects to his dead teacher, whom he hadn’t had the courage to serve while he was still alive. Instead of frightening him, the Cross armed him with courage, it awakened him and forced him to take a position as regards the Crucified Lord. There are heart-rending moments which bring us face to face with ourselves, which thoroughly shake us and lead us to momentous resolutions. These are moments when people feel the hand of God reaching into their very depths, as the presence of love. Joseph was heart-broken by Christ’s Cross, but overcame his subconscious fears, recognized his obligations and asked the Roman governor to  allow him to provide the last ritual requirements for Christ’s body. He thus placed it in the tomb with all the required procedures.

But the tomb, which was hewn into a rock, and closed at the entrance with a stone, was never going to be able to contain the Author of life. As the Church sings on the evening of Great Friday: ‘For the tomb will not restrain him who is life itself’ [Synaxari for Great Saturday].

Thereafter, the excerpt describes how the myrrh-bearing women seek dead Jesus at the tomb, in order to anoint him with spices, in accordance with the custom of the time. While they were going to render their last homage to him, they were astounded by the beginning of a new benefaction, the significance and magnitude of which they were unable to comprehend. In the most laconic manner, the Evangelist describes the psychological state of the women: ‘So they went out quickly and fled from the tomb, for they trembled and were amazed. And they said nothing to anyone, for they were afraid’. When the angel told them: ‘Do not be alarmed. You seek Jesus the Nazarene, who was crucified. He is risen. He is not here. See the place where they laid him’, this induced awe and astonishment, to the extent that they lost their power of speech.

These women were the first witnesses of the Resurrection. No matter how harebrained their words sounded to the disciples to whom they related the fact of the empty tomb, they represented a reality which the disciples were to experience themselves later on. The Risen Lord would appear to them to confirm their faith and to send them out ‘to the ends of the earth’ (Acts, 1, 8) as witnesses of the Resurrection. He appeared to them, not to Joseph, who had taken a clear position regarding Jesus and who most certainly would have believed in the Resurrection, even though we have no information on this from the Gospel writers.

Apart from what we said about the person of Joseph, the first part of the narrative shows the historical reality of the death of Jesus, which is beyond doubt. The second part presents the Resurrection as a reality which, however, can’t be incorporated into the causality of events in the  world as it is. Rather, it’s founded on the basis of faith. An unbeliever or skeptic will never be convinced rationally about the historical truth of the Resurrection and will, instead, talk about the body being whisked away by the disciples- which is what the Jews said- or about the gullible disciples believing in fairyland- which is what rationalists have said over the centuries. What is convincing, however, is the experience of the disciples and the fact that they gave their lives in order to declare the authenticity of this experience.

The Resurrection of Christ doesn’t convince rationally but challenges people in every era and invites them to take a position regarding it. Neutrality isn’t an option. A negative and hostile attitude towards it means our subjugation to the narrow confines of a secular existence, dominated by the fear of death and the dread of oblivion. On the other hand, a positive attitude, faithful acceptance of Resurrection, means that we open ourselves up to a new world of hope, where the barricade of death is torn down by the expectation of the Resurrection. Because Jesus Christ has risen from the dead. ‘Christ has risen from the dead, and has become the first-fruits of those who have fallen asleep’ (I Cor.  15, 20).