Why were the Myrrh-Bearers the first to hear that Christ had risen? 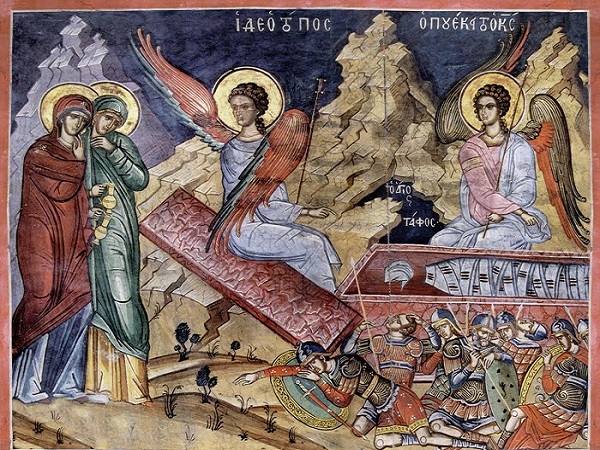 But why was this the case? Why should the Lord’s first appearance have been to them, not to the men, to the apostles, to Peter and John. There’s a reason why the women heard the glad tidings first and that’s because they deserved to. They had shown virtues which not even the Lord’s male disciples had. What were these?

From the first day they came across the Lord in Galilee, they became His faithful disciples. The followed Him and spend their own resources to support Him and His group of followers. Mark (15, 41) tells us that it was in Galilee that they began to follow him and Luke (8, 3) informs us that they spent their own money on His support.

But it was not only then. At the time of the Lord’s sacrifice, when everyone had abandoned Him; when Judas had betrayed Him for thirty pieces of silver; when all the other disciples except John had left Him (Matth. 26, 56); when all those He’d benefitted over the course of His public ministry had gone and joined His enemies, shouting ‘Away with Him. Crucify Him’; when He’d been generally abandoned by one and all, the Myrrh-Bearers remained His loyal and devoted disciples. They stayed by the Teacher, living the drama from as near a distance as the conditions would allow, but were never actually apart from Him for an instant. ‘There were also many women there, looking on from a distance, who had followed Jesus from Galilee, ministering to him, among whom were Mary Magdalene and Mary the mother of James and Joseph and the mother of the sons of Zebedee’ (Matth. 27, 55-6), ‘… and Salome… They followed him and ministered to him, and there were also many other women who came up with him to Jerusalem’ (Mark 15, 40-1). They found the mental fortitude to stay there, at Golgotha. They witnessed the terrible spectacle. They heard all the words that Jesus spoke, up to and including ‘It is finished’.

But even after His death, they didn’t depart. They stayed near the Cross in lamentation. And once Joseph from Arimathea and Nicodemus arrived with permission to proceed with the burial, they hurried forward, assisted them, accompanied them out to the tomb and didn’t move from there until the sun of that most dramatic day shone its last rays upon the earth.

They demonstrated their courage, their magnanimity and their love more than ever on the night of the Resurrection ‘on the first day after the Sabbath’. Even though they knew the tomb was sealed, that a large, heavy stone blocked its entrance, that armed Roman soldiers were guarding the grave and had orders to beat anyone daring to approach it, the myrrh-bearing women still set out ‘very early’, while it was still dark, before the sun had risen, to go to the tomb, taking with them the spices they’d prepared in order to anoint Christ’s body. No amount of fear and no difficulties would stand in their way. The only thing they were concerned about was how they would roll away that enormous and unmovable stone from the opening to the tomb.

It was impossible for Christ to overlook such love, such devotion, such courage and not reward them. In recompense for their love, then, they were the first to hear the great tidings, the announcement of the Resurrection- ‘Christ has risen’- from the angel of the Lord. Thereafter, they were the first to see the Risen Lord, and were commanded to take the message to His disciples and to the other women.