When you go to the Holy Mountain and see the humble monks, you might think that they live a lazy life, without purpose. It may seem like this if you see things from the outside, because not many people are able to understand the terrible, unceasing warfare that’s conducted in the souls of the monks.

This warfare is almost supernatural, invisible and is conducted not only against the demonic powers of the princes of darkness, but, for beginners, also against the flesh, that is against carnal passions and desires.

In his writings, Father Silouan describes how this warfare brought him to despair, and almost to suicide. Our Lady the Mother of God appeared to him and encouraged him so that he could overcome and trample down worldly thoughts and the evil spirits. So it was that, after a quarter of a century of fierce and exhausting warfare, he emerged victorious. Until then he’d been seeking God; now he knew him. He’d been a disciple, but now became a teacher. 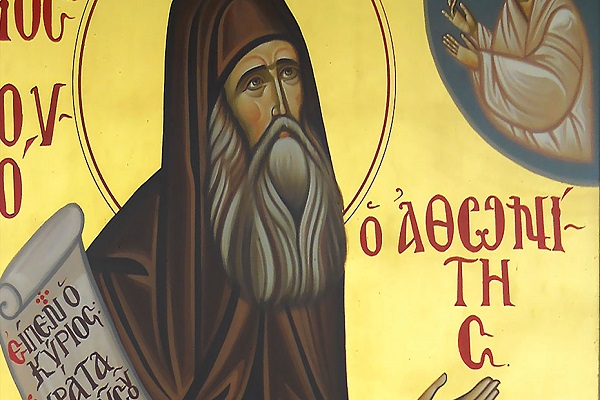 Elder Silouan was also my own teacher. One time I asked him: ‘Father Silouan, doesn’t having all these people around bring turmoil to your mind and to your prayer? Wouldn’t it be better for you to go to a hermitage in Karoulia and live in peace, like Fr. Artemios, Fr. Dorotheos, and Fr. Kallinikos? Or to live in a remote cave, like Fr. Gorgonios?’. ‘I do live in a cave’, Fr. Silouan answered. ‘My body is the cave of my soul. And my soul is the cave of the Holy Spirit. I love the people of God and serve them without leaving my cave’.

Always willing to serve each person, wonderfully modest and most caring of others, he would talk about God with great enthusiasm, and with the familiarity you might show if you were talking about a friend. ‘I know God. He’s caring, good and swift to help’. As the Elder was saying this, another monk, Fr. Theofan, overheard and was concerned that Silouan had lost the fear of God. Later, however, when Fr. Theofan read the writings of Fr. Silouan he changed his mind and said: ‘Fr. Silouan advanced so far he reached the level of the Fathers of the Church’.

In my view, the works of Father Silouan should take their place among books on psychology. If for no other reason than that they confirm that their author was a great spiritual warrior of the 20th century and that they endorse what was taught and written by the glorified Fathers of the Church.

There’s something new in the teachings of Father Silouan: ‘Keep your mind in hell and despair not’. Through this reminder, he expresses encouragement against melancholy and sloth. I personally had never heard such words before.

Another expression is also important: ‘Love is superior to knowledge’. This is the everyday, fundamental teaching of Saint Silouan.

With his love, which was accompanied by prayers and tears, he forgave sins, supported the weak, corrected those who were acting wickedly, healed the sick and stilled the winds. He did exhausting work in the monastery, where he was in charge of a warehouse with heavy goods.

I once told him that the Russian monks were greatly upset because of the tyrannical behavior of the Bolsheviks towards the Church of God. He replied: ‘I was also troubled about this in the beginning. After much prayer, however, I arrived at the following thoughts: The Lord loves everyone inexpressibly. He knows everyone’s plans and the time allotted to them. The Lord has permitted the persecution of the Russia people for some future good. I can neither understand what this might be, nor can I stop it. I say to my brothers who are agitated: “You can help Russia only through prayer and love”. All that’s left to me is prayer and love. Anger and inveighing against the atheists isn’t going to set matters to rights’.