One day, the Elder said to me:

‘Christians must avoid pernicious religiosity: both the feeling of superiority because of their virtue as well as the sense of inferiority over their sinfulness. A complex is one thing; humility’s another. Melancholy is one thing; repentance is something else.

One day, I was paid a visit by a secular psychiatrist who attacked Christianity because, according to him, it created guilt and melancholy. I answered that I agreed that some Christians, through their own erroneous thinking or that of others, were trapped in the sickness of guilt. I then told him that, by the same token, he had to accept that people living in a secular manner were also trapped in an even worse sickness, that of pride. If you’re close to Christ, religious guilt is dispelled through confession and repentance; but the pride of secular people who are far from Christ never disappears’. 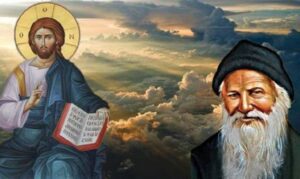 These views of the Elder cleared up some questions I had, related to the psychological problems of the Christian life. I realized that the Elder wanted us to avoid pride, disguised either as the self-justification of ‘Christian’ Pharisaism or the self-condemnation of a ‘Christian’ timid conscience. I saw that the audacity of those ill through ‘purity’ and the cowardice of those sick with ‘guilt’ are essentially the same, being two sides of the same coin: pride. Because true Christian believers are freed of guilt by confession and remission, and they enjoy the freedom bestowed by Christ. They recognize that this is a gift from God and don’t treat it lightly. They’re cleansed by the blood of Christ, not by their own efforts. So they rejoice and give thanks. They themselves aren’t proud and, moreover, see everyone else as potentially good through Christ’s blood.

The Elder shows us the way, which bypasses the evil (sin) and the worst (pride) and brings us to the best (humility). This is why he tried to protect the purity of humility from the danger of adulteration. He would say to me: ‘We should be humble but not obsequious. Obsequiousness is a snare of the devil which brings inertia and despair, whereas true humility brings labor in the observance of Christ’s commandments and hope’.

With his teaching, and even more so with his experiences, the Elder guided his flock to meadows of love and humility. He lived humility, in the belief that he himself was nothing, because God is everything and that whatever we see as being our own is, in fact, a gift from God.