The Guilt of the Modern Era

To our unnatural and ‘illogical’ logic, it appears that each person does not bear full responsibility individually. The main weight lies with the all-powerful nature of the prevailing, impersonal social outlook and the uncontrollably frenzied times in which we live. These times have many characteristics and certainly their achievements are impressive. Our era has, on its own, identified incredible boundaries which it has also gone on to reach. It has broken the barriers of the earth’s gravity. It has produced people with features hitherto unknown, with artificial or animal organs, or with parts from other people. It has made species which did not exist before. It alters nature and eliminates its laws. It enters the body, influences the soul, creates outlooks and habits and defines behaviors. It travels inconceivable distances and enters the tiniest of worlds with means, speeds and energies which surpass all imagination. Its main characteristic, however, is that it opposes authenticity, integrity and the truth.

It  devises and produces many ‘look-alikes’. Our drawing-rooms are often festooned with flowers that seem real, but aren’t. Television studios show backgrounds which don’t exist. Advertisers refer to worlds which have no relation to reality. People paint themselves, pretend and even undergo surgery in order to present a persona which isn’t real or a sex which is not compatible with their hormones and their anatomical features. Profligacy and an impressive image, as well as the prevalence of ‘appearance’ are at fault for destroying ‘substance’, as well as the discreet presence of ‘existence’. 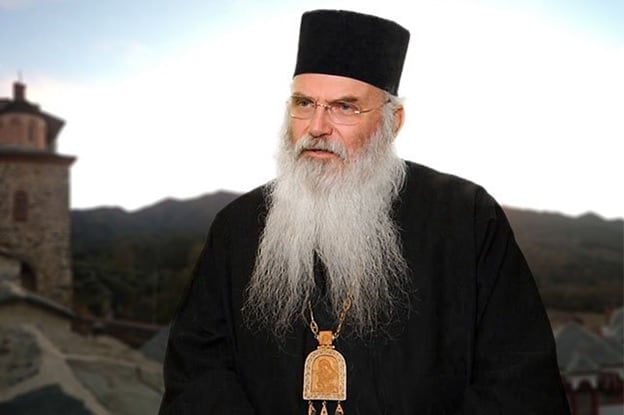 All of this has influenced the ways in which we see things and have given a false shape to our spiritual life, too. We Christians often talk about the brilliance of science, which, supposedly, agrees with religion; about the value of democracy which allows the Church to function freely; and about human rights as if these were the greatest values. Yet we all know that science has made us more arrogant then ever before, since, in place of God, we’ve put the idol of the self-worshipping human being; democracy has become a substitute for the will of God with the asinine responsibility of our own choices; and human rights have side-lined one of the rights of God: to intervene in our lives, to function as God.

And so we’ve ended up as Christians who are attempting to achieve something on our own, and who find it difficult to entrust ourselves to God’s grace. We’re Christians who are trying, on our own, to discover God’s secrets, instead of waiting patiently, in the expectation of him revealing his glory to us. We’re Christians who are seeking recuperation and serenity, but are ignorant of the experience of inner peace. Christians who, when we say the word ‘love’, mean some kind of egotistical affection or pathological attachment, because we refuse to recognize in it the need for patience, tolerance towards others, or the cost of sacrifice rather than the deception of some selfish enjoyment.

And this whole way of seeing things has passed into Church worship. In our monasteries we make liturgical embroidery which seems to be hand-made, but isn’t. Vestments and sacred vessels have bright stones which look like gem stones in the way they sparkle, but are nothing like them in objective value. Our icons recall times past, but they’re on paper, without color or cost, without effort, love, inventiveness or time. We photograph and depict in detail what our priests perform, but have difficulty in recognizing the presence of God in our sacramental rites. We call our excursions ‘pilgrimages’, but our soul isn’t able to make its way out into the wilderness of God in order to encounter him. We visit holy sites, but the visitation of the Holy Spirit isn’t apparent in our life. We’re content with ‘external motions’ and don’t activate our ‘internal motions’. We’re full of useless and outdated theological knowledge, but are very poor in precious spiritual experience. This is why our worship, which has unheard of ritual splendor, is more like a festival than a sacrament. It resembles a spectacle more than a prayer.

The fruit of the authenticity of the saints is their authorship of very profound texts, many of which came to light only after the saints who wrote them had departed this life. Confirmation of our own so-called authenticity is that we read their testimonies or discuss them in the comfort of our living-rooms, though without any appetite for asceticism, personal mortification or sacrifice. Instead of reading the sacred and holy texts in order to become humble, we use them the judge our brothers and sisters or to sheepishly confuse our dreams with our reality.

The saints nourished their life of suffering with Holy Communion. We parade our secular spirituality and self-justification by imitating them in the frequency of communion, but not in the authenticity of repentance and faith. Intellectual knowledge which is expressed through tensions and diffusions has replaced the empirical revelation which is confirmed through silence, inner calm and tears. We regurgitate the old in order to justify our views and opinions, though we have difficulty with the emergence of new knowledge which humbles us but embraces our brothers and sisters.

So, contemporary spirituality frequently appears with a deceitful façade. In essence it’s nothing more than a rationalized religiosity and imitative traditionality concealed behind a sentimentally sick attachment to forms, rules, external patterns, habits or persons and is expressed as tawdry conservatism. All of this leads to pseudo-virtues which deceive us, please the devil and wound God. Within us, it gives rise to passions and unforgiveable weaknesses, nurtures cruelty and hypocrisy and calls itself authentic faith and experience. It has nothing to do, however, with the spirit of God and the tradition of our Church. All it does is create Christians of sham authenticity, since it transforms the faith into delusion and mockery and transfigures experience into disorientation and illusion.

This is why we often complain about how we’ve been wronged, about our difficulties, the excessive demands made on us and unbearable burdens we have to bear, about spiritual exhaustion, about the fact that God’s deaf and other people don’t understand. This begets the feeling that miracles don’t happen, that there aren’t any saints, that salvation’s difficult. This, in turn, produces doubts, illusions, defeatism and an unwillingness to strive. In general, it alters the face of Christ within us. It’s all the natural consequence of people having a tainted outlook and a lost authenticity. The greatest danger in our time is that our experience has lost its genuine nature, that it’s poorer as regards authenticity and that, in the end, it’s a stranger to truth.