The Church is the authentic interpreter of Scripture

Ill-founded views of Scripture within the Orthodox Church

With reference to Biblical texts, the great theologian of our era, Elder [Saint] Sophrony Sakharov, said that even if we were to lose all of them somehow or another, we’d still be able to re-write them. Perhaps not in exactly the same words, but certainly in the same spirit. It’s clear from this that there is no question of making idols of the letter and texts of the Scriptures. In any case, it’s obvious and well-known that the Church existed before the texts, which were nevertheless alive in its tradition. And it was the Church which determined which texts were canonical, with all that involves. So what exactly is Scripture? In simple terms, a written part of the whole, God-inspired tradition of the Church.

Unfortunately, however, the Protestant spirit of sola scriptura which was consciously or unconsciously encouraged by fringe movements within Orthodoxy has infiltrated deeply. I read in the writings of a modern theologian that he doubted the entry of the Mother of God into the Holy of Holies. This was because it conflicted with his rationalism and, on top of this, was not recorded in the canonical books of the Church. But he overlooked the fact that this feast, taken from the apocryphal Proto-Evangelium of Saint James was not merely accepted into the official Church calendar, but was invested with its own hymns and texts, which establishes it firmly within the tradition of the Church. Can the Fathers really have been so deceived over so many centuries? That really sounds far-fetched to us. 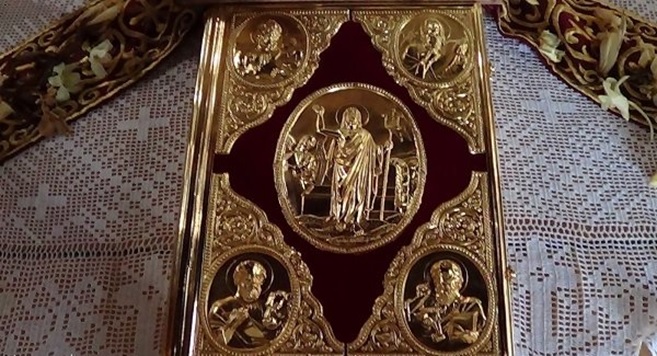 Another well-known  academic teacher who departed this life recently cast doubt on the translation/resurrection of the Mother of God, again precisely because it’s not to be found in any of the written tradition of the books of the Church. What’s strange here is that, at university level, the determination of the canon of Scripture within the Church is taught, as being represented and expressed in the Holy Spirit, through the saints and the bishops in synod. It’s astounding that our tradition should be called into question by such people, who would normally be expected to understand it better than others. In this particular case, the scholar concerned placed himself above Saint Gregory Palamas, who spoke with great clarity about the dormition of the Mother of God. It may come as no surprise that the man in question was a leading figure in one of the fringe organizations of the Church.

If we take a quick look at the heretics and other non-Orthodox, we’ll see how much they depend on the basis of the Biblical letter. Jehovah’s Witnesses, Evangelicals, Pentecostals, and various other groups stand on the text. For them, Scripture enjoys the status of a graven image which was born and nourished by their insistence on the letter and, particularly, the arbitrary, anti-tradition and anti-Orthodox interpretation of the Scripture which almost the whole of heretical Christianity gives. Moreover, these views conflict strongly with the linguistic tradition of the texts, which is a powerful witness to the cooperation between God and the Church in the recording of a part of ecclesiastical history and tradition.

‘You believe that there is one God. You do well. Even the demons believe that and shudder’ (Jas. 2, 19).Let’s not forget that when Lucifer tempted the Lord in the wilderness, he engaged in an argument with him based on Scripture. Any further comment on our part would seem to be redundant. The Church wrote, explained and continuously interprets the Scriptures in the Holy Spirit. This is where their God-given inspiration lies: not in any magical short-hand dictation from on high, which is authentic to the letter, but rather in the correct ecclesiastical interpretation, in the spirit of the Spirit, of the words of godly-motivated authors concerning theophanies, divine writers, manifestations of saints and divine events, as these are experienced and lived ceaselessly by the whole of the charismatic body of the Church. With these thoughts, our faith is never shaken, being founded, as it is, on things beyond doubt, on experience, rather than on the words, individual interpretations and fantasies/obsessions of any one particular person.

And there’s something else we should make clear. There aren’t only two sources of truth in the Church, that is Scripture and Tradition, as the Latins taught in their reaction to the Reformation. This teaching has been transmitted to us as well, and it presented as being Orthodox, though, in fact, it isn’t. The truth lies elsewhere: both Scripture and the rest of Tradition (written, oral, artistic and all the Church monuments) draw on our Christ and God, and the sum total of his body, which is the Church. Everything within the Church happens in collaboration with the Holy Spirit (Acts 15, 28). So this is where divine inspiration is to be found, in the whole body and its charismatic agencies, which, in turn, take everything, in the Spirit, from our Triune God.

The Orthodoxy of the Church and the saints has the fragrance of liberation and genuine knowledge of God. Alas, the Christians of all stripes and provenance who tend towards heresy narrow the Gospel message greatly, shredding it into an infinite number of unlikely interpretive fabrications, prompted by demonic powers. The Church simply preaches Christ Crucified and Resurrected. One and the same, yesterday, today and throughout the centuries, the sole Truth, the embodiment of Love, on whom hang all the Law and the Prophets. That is enough and more than enough. The other confused, weird, sick, poisonous and delusional things are from the devil and from heresies which attract befuddled people, as Saint Porfyrios puts it. They lead people far away from God, with all that implies and involves. We Orthodox, however, keep the Gospel at the center of our life and worship because, according to tradition, the Gospel symbolizes Christ and is, in fact, the Lord himself.