At the feast of the Dormition of the Mother of God we kiss the holy icon which depicts her falling-asleep. The whole icon is not only a pictorial representation of what happened at the funeral service of Our Lady, but also shows us what the Church is. It’s an icon which shows in the sharpest relief exactly what the mystery of the Church is.

The Church isn’t a human organization, but the theanthropic Body of Christ. It’s the union of God and humankind in the person of Christ. In the holy icon of the Dormition,  we see that, at the center, the Church has Christ and his Mother, Our Lady, and the Apostles around them, the Bishops and the Angels. 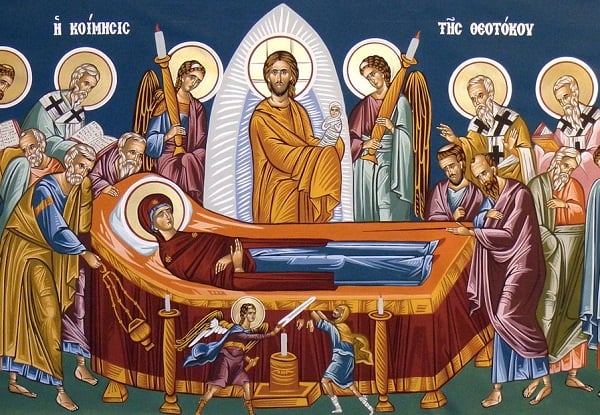 Then it’s clear from the icon that, in the Church, death has been abolished and that what we call death is no more than a sleep. The body receives the grace of God and is brightened by it, and the soul lives after death. If the person concerned has been sanctified, they are ‘in the hand of God’. We want what happened to Our Lady to happen to us, as well, insofar as this is possible. In other words, we hope that, when the time comes for us to depart this world that we’ll be in the Church, will pray, will have our spiritual fathers with us and that we’ll partake of the Body and Blood of Christ.

But, just as Zepheniah attempted to dishonor the body of Our Lady and was unable to do so, there are others who wish to harm the Body of Christ, that is the Church. They haven’t succeeded and never will, because the Church isn’t a human association, but the theanthropic Body of Christ. The Church has great power and fears absolutely nothing, but rather saves everyone, even its so-called enemies, provided they repent.

The way in which the people in the icon are arranged forms a notional cross. The horizontal dimension is formed by the bed on which the dead body of the Mother of God lies. The vertical is formed by Christ at the top and, at the bottom, the Jew, Zepheniah, who wished to dishonor Our Lady’s body. So we have a notional cross, composed of those attending the funeral, most of whom were praising her and one who wished to dishonor her.

The cross is glory and dishonor, salvation and condemnation. Saint Paul says that the message of the cross is foolishness to the lost, but the power of God to the saved (1 Cor. 1, 18).

The Church also has its trials, which come from people who neither experience nor are able to understand the mystery of the Cross and the Resurrection. They have no taste or understanding of the godly life and react badly towards those who live in another dimension of life.

The teaching of the Fathers deals with the Cross and Resurrection of Christ, which is the love of God flowing from the Triune Deity before the creation of the world, at its creation, before the fall of humankind, after the fall, before the incarnation of Christ, at his incarnation, before Pentecost and after it. We share in this love of God in different ways, since it burns and illumines, in the double action of the Cross.

The mystery of the Cross is plain to see on the faces of those depicted in the icon of the Dormition of the Mother of God: the pain, the desire, the love, the prayer, the ecstasy and the vision, the hymns and the silence are all a way of sharing in the mystery of Christ’s Cross.

The Cross is the glory of Christ, with his love and self-emptying, but it’s also the glory of Our Lady, because she lived the whole of her life in godly and sublime humility, which is the mystery of the Cross and the Resurrection. It was also experienced by the Apostles, and the hierarchs, who proved themselves to be friends of God, friends of the Cross.

Finally, to dwell on this notional form of the Cross in the icon, it can be seen that the value of people is also stressed, since through the whole of our life and the manner of our falling-asleep- in accordance with the model of the Mother of God- we become the horizontal dimension of the Cross, to which is added the vertical, that is the grace of God.

Our Lady brought great joy to the whole world, since she gave birth to Christ, who is our joy and the hope of our salvation. This is why we love her and ask her to protect us, to strengthen us in the difficult times of our life, to pray for us that we may stay within the Orthodox Church, to intercede that we may be granted victory over death by the power of Christ and entry into the kingdom of heaven.