The Meaning of the Great Feast of the Transfiguration (1)

The Transfiguration is the most sublime initiation, the greatest lesson of mystical theology and every last detail is instructive. What did Jesus want to reveal through the Transfiguration; why did he take only three disciples; why did they need to ascend a mountain; why did the disciples have to fall asleep and what does this symbolize; what does the white light symbolize; why were Moses and Elijah with him; why can’t the mystical experience of God be described and defined? 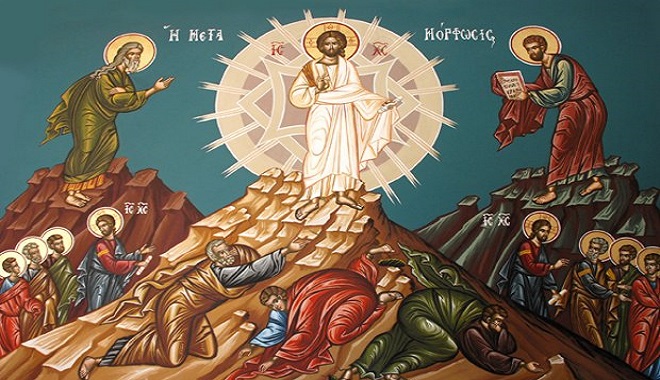 There’s a folk custom that’s worth mentioning here: in rural areas it’s a tradition to take the first grapes of the year to be blessed with a special prayer in church on the day of the Transfiguration. The blessed grapes are then distributed to the congregation.

The Gospel reading leaves no doubt regarding the  historicity of the event of the transfiguration of Christ. The Lord took three of his disciples, Peter, James and John, and was transfigured ‘before them’. The presence of the three as witnesses is particularly significant, because it means that we aren’t dealing with a theological myth. Certainly it involves a spiritual experience on the part of the disciples of Jesus, but this experience is grounded in a historical event and is linked to external, readily understood phenomena. They saw the Lord at the top of the mountain, with his face shining ‘like the sun’ and his garments as ‘white as light’. Standing next to their transfigured Teacher,  they also noticed two important personages from the Jewish apocalyptic and eschatological tradition, Moses and Elijah. This all goes to show a kind of theophany within the Messianic character of the event.

At this same time, according to the narrative in the extract, there were many people gathered on the lower slopes of the mountain. Together with the disciples, they were waiting for the Lord to come down from Tabor, to preach the new faith to them and to heal their suffering invalids. The whole Gospel reading has a wonderful, realistic approach to the event. It leaves no room for doubt that this is, indeed, a simple though eminently clear,  description of a genuine historical occurrence. This occurrence took place not merely in front of three disciples but also the people, and cannot therefore be subject to any doubt. Quite the opposite: such a historical event can be the object of historical research and theological interpretation, so that appropriate conclusions may be drawn to reinforce the faith and strengthen the faithful.

Historical events in the Gospels ought not to be isolated, nor should we invest them with the aura of a theological myth. They’re part of the general history of humanity and their revelation has a direct relationship to world history, especially the history of the plan of divine providence. Indeed, the fact of the Transfiguration is directly linked to the historical process and to the historical progress of humankind towards perfection and deification.

In the event of the Transfiguration, we have the following interesting elements on which to build a substantial theological approach. For a start we have the appearance of Moses and Elijah, two people from the sacred history of Israel, who are directly linked to the coming and manifestation of the Messiah. The nature of the event is therefore clearly Messianic and so the whole of the Gospel narrative is Christocentric. In other words, it’s there to shed light on the mystery and person of Jesus Christ and to give a clear answer to the historical question: ‘Who, then, is this man?’.

Jesus isn’t merely a historical person who was born at a particular time and place, ‘in Bethlehem, Judea in the days of Herod the Great’; whose ancestry can be traced as a member of a particular family within the tribe and family of David; and who is the long-awaited Lord’s Anointed who will come and save humankind. According to tradition, his coming would be confirmed by the presence of the apocalyptic personages of Moses and Elijah.

This presence of Moses and Elijah is a long-standing tradition in the eschatology and Messianic teaching of Israel. As was the manifestation, according to another tradition, of Moses and Enoch. These people were a guarantee and confirmation of a genuine Messianic presence and theophany. And they didn’t merely confirm the presence of the Messiah/Anointed One in that historic present. Tradition had it that the same people would also accompany Christ at his glorious, eschatological coming. This is precisely why the Transfiguration is a foretaste and forecast of the Second Coming. So, in this event we have the actual history of the Transfiguration and also the prospect of the eschatological development and completion.

The second interesting point of the Transfiguration is the appearance and presence of the uncreated light. The light of the Transfiguration envelopes Christ in the main, but also, by extension, the disciples, the whole world and the whole of creation. One wonders, of course, what kind of light this might have been and what its significance was. Perhaps it was no more than a reflection of the sun’s rays which, in any case, illumine and brighten objects. Or was it another ‘light’, of a different nature and quality? This question has been posed by many people and requires not only a historical approach but also theological interpretation.

Patristic hermeneutical theology offers a number of interesting approaches. In particular, Saint Basil the Great, commenting on the events of the initial creation in his work The Hexameron, talks at one point about a primeval ‘light’ on the first day. He calls this light ‘most clear light’, ‘genuine’ and ‘immaterial’.

Indeed, he distinguishes it very precisely from the light we know as coming from the sun and moon and leaves us to understand that it is probably a kind of ‘uncreated’ light which denoted the presence of God the Creator. Much later, Saint Gregory Palamas also spoke with great precision about the existence of an ‘uncreated light’, which he distinguished from all and every created and material natural light. What is created belongs to the creation and to our world; the uncreated belongs to God and his presence. One is material and dim; the other is ‘immaterial’ and ‘very pure’. Thus, the theology of Saint Gregory is in tune with the interpretation of Saint Basil and can be interpreted as a prelude for our understanding of the light of the Transfiguration and the light from the empty tomb at the Resurrection. This same light fills our own spiritual path and transfigures our existence. In this sense, the light of the Transfiguration in the Gospel reading can be taken as having profound theological meaning which does not permit any one-sided or shallow interpretations.