Today the Church honours and celebrates the sacred memory of Blessed Kyriakos the Anchorite, who was born in Corinth in 408. His father was called Ioannis and was a priest, while his mother was Evdoxia. The then bishop of Corinth, Petros, who was Kyriakos’ uncle on his father’s side, ordained him reader. But Kyriakos did not find inner peace in Corinth and so, at the age of eighteen, he left for Jerusalem. There were many monasteries there at that time and some great ascetics, among whom he wished to live. His soul took wings and soared with divine love; he was captured and drawn by the eremitic life. 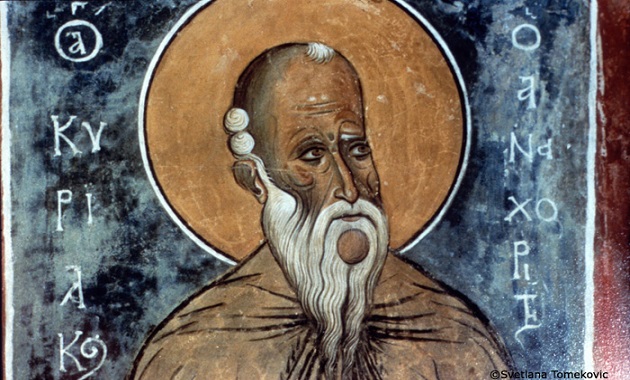 When he returned to the monastery of Saint Efthymios, Saint Kyriakos was ordained a priest. He remained there for many years and was so gentle and ascetic that no one ever saw him angry, nor even eating.  He ate just enough to keep body and soul together, when night began to fall in his cell. When he was seventy-seven years old, Saint Kyriakos left the monastery for the desert and, at the age of ninety-nine left that for an even more remote spot. He always had a lion with him for company and protection. We shouldn’t forget that, before the Fall, the wild beats lived with Adam and Eve in paradise.

Saint Kyriakos fell asleep in the Lord at the age of one hundred and seven, and was, until the end, just as ascetic and robust in body. In the depths of old age, he had all his faculties, just as if he were still young. He was a well-built, handsome person, with manly grace, most venerable and imposing to those who approached him.  And everyone did come to him, because he was gentle and kindly. Since he didn’t stay in one place and one monastery, but went from Saint Efthymios to Saint Yerasimos, back to Saint Efthymios and out into the  desert, then into another desert, he was given the name of “anachorite” [from the Greek verb αναχωρέω, meaning “to withdraw”]. 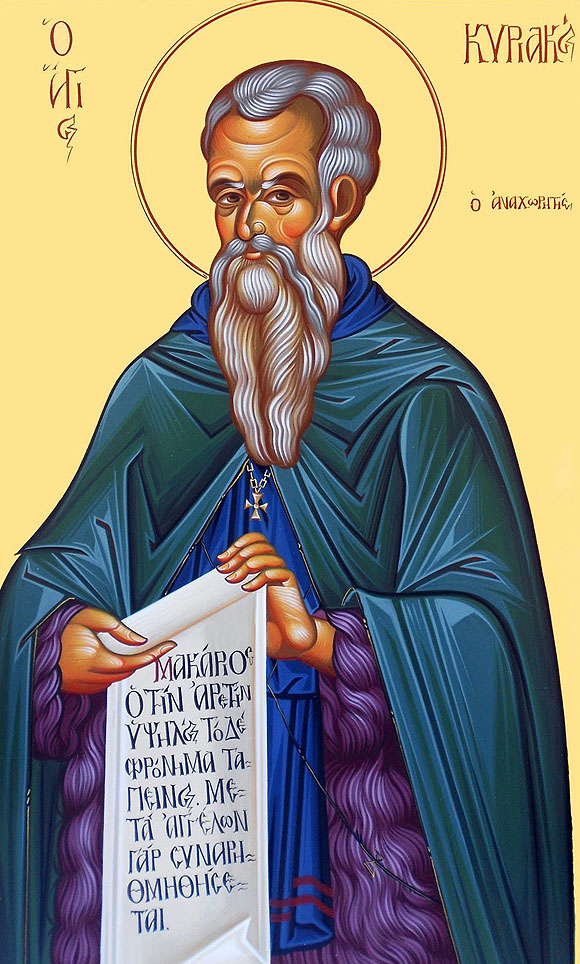 It has been well proven from the lives of the saints, and science recognizes it as well, that abstinence and moral purity are factors in bodily health and long life. Most bodily illnesses which afflict people and make them old before their time are the result of moral turpitude and abuse. On the other hand, people who have respected their bodies as the animate temple of God and have not been enslaved to the passions, have lived long and died “well-stricken in years”. Saint Kyriakos was one hundred and seven years and still had a lively mind and all his other faculties.

But it’s true that our own age is not much interested in talking about asceticism. These days people worship their bodies, without knowing how to respect and love them. They’re very extrovert and goal-orientated and want nothing to do with crucifying the body, self-denial, voluntary poverty and deprivation, obedience and humility. This is what asceticism is all about. These things are what constitute the lives of those whom Christ called “people of violence”: “The Kingdom of Heaven has suffered violence and people of violence take it by force” [Matth. 11, 12]. One of the great ascetics and men of violence towards the Kingdom of God is Blessed Kyriakos the anchorite. Amen.