The animal kingdom in the kingdom of heaven; can there be real co-existence between humans and animals? (1)

In Saint Mark’s Gospel, in the course of the narrative of Christ’s sojourn in the wilderness, we see the Lord living with wild animals and interacting with Satan and the angels (Mk. 1, 13). So, for the forty days that Christ dwelt in the wilderness, he had no contact with any other human person. The order in which the beings he encountered begins with the most dangerous and ends with the ministrations of the angels. The wild animals are in the middle and represent the animal kingdom. The phrase in the narrative ‘and he was with the wild animals’ has been interpreted in two main ways.

The first considers that the existence of wild animals is an indication of the trial of Christ, who was faced with enormous difficulties for the forty days he lived in the wilderness and these difficulties are expressed by the inhospitable nature of the environment for humans. Metaphorically, we can see the analogy between Israel, which was tested for forty years in the wilderness, and Christ who was being tested then. Scholars also mention that the use of words in Mark’s narrative bears similarities to those related to Israel’s stay in the wilderness (Ex. 16; Deut. 8, 2-4; Ps. 98, 8-11). 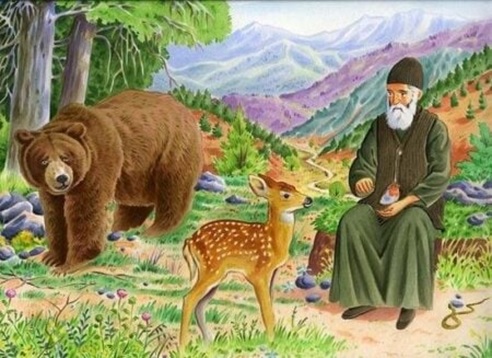 The first interpretation also claims that the reference in Mark to wild animals is negative and demonstrates the inhospitable surroundings that prevailed in the desert. Christ had to deal not only with Satan but also with his instruments and the wild animals themselves, which, in general behave in a hostile manner towards human beings. Moreover, we shouldn’t overlook the fact that, at that time, people’s outlook towards wild animals was negative. Given this, we see that Christ functions as an opposite example to that of Israel during his time in the wilderness. Even the hint in Is. 42, 1 concerning the servant of God which is recorded in the baptism narrative in Mark (Mk. 1, 10-11) reinforces such a position, which seeks to have the servant acting as the savior of all the people.

The second interpretation is associated with the vision of the prophet Isaiah (11, 6-9) and has an eschatological tone. In the last times, people will live in peace with the animals. Prey and hunters will co-exist peacefully with no threat between them. In this instance, Christ is presented as the new Adam who overcomes the temptations of Satan, unlike the old Adam who lost his peaceful co-existence with the diversity of animals and with the environment in general. Of course, the issue with this interpretation is that there’s no reference anywhere in the narrative to Christ living peacefully with the wild animals. The Evangelist mentions the wild animals in a more general context of trial and temptation. Once Christ had dealt with Satan, Mark simply records that he was served by angels and is no longer concerned with wild animals.

Christ wasn’t in the hospitable surroundings of paradise, as the old Adam had been, but in a place of trial and deprivation. If we just consider that, because of the high temperatures which prevail there, the animals of the wilderness are less active during the day and more so at night, this places people at a disadvantage. Besides, the animals in the desert developed sharper eyesight precisely so that they could hunt during the hours of  darkness. Naturally, there was no such background to the situation of Adam in paradise. Mark doesn’t present Christ subjugating the wild animals, nor co-existing with them in harmony. This is a rather interesting and significant position, which highlights both the inhospitable nature of the wilderness as well as the co-existence of Christ with the other beings during the time of his sojourn in the wilderness.

We would like to make particular mention of the metaphorical use of the words ‘wild animal’, because authors of the time described certain people metaphorically, as ‘wild animals’. These people were mostly in positions of leadership, since ordinary citizens experienced more than enough of their hostility. Both Nero and Domitian were called wild animals, because they were bloodthirsty and extreme in their actions. 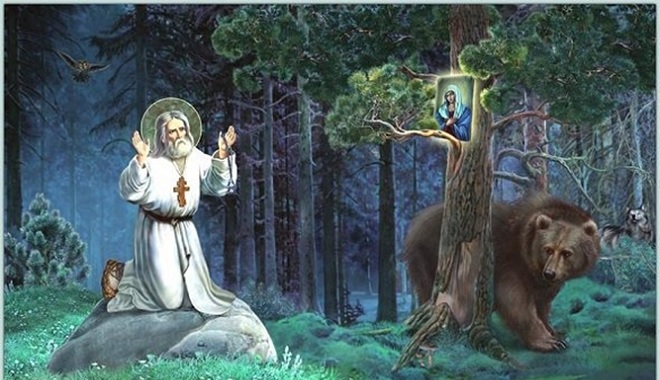 Thereafter, we can confirm the existence of wild animals in the Jordon Valley, following research carried out in previous centuries in the region by travelers and scholars. There was considerable diversity of animals because sightings were made of leopards, wild boar, hyenas, foxes, jackals, lynx, wildcats and Asian lions.

Also of interest is the position of Plato, who raises the word ‘beast’ to the realm of ethics. In his theory of the division of the soul into three parts, he mentions that within people there are wild animals who war against each other. These beasts are the desires themselves. According to Plato, there are within us both tame and wild animals which control the many-headed animal, the soul. A righteous person takes care of the tame animals and restricts the wild ones; an unrighteous person, on the other hand, has lost control and is led by the wild ones. The influence of this thinking led to the portrayal of heroes such as Hercules and Orpheus as fighting against their passions, which took the form of wild animals.