The Holy Forebears Joachim and Anna

Joachim and Anna, the forefather and foremother of Our Lord Jesus Christ, occupy an important place of honor in the hagiology of the Church. At almost every service, there’s a separate reference to these venerable persons, with the celebrating clergy invoking their prayers to God. They’re the parents of the Mother of God, who were deemed worthy to give birth to her, in order to implement the plan for the salvation of the human race.

Information concerning them comes exclusively from holy Tradition, since nothing is mentioned in the New Testament. But for us Orthodox, Tradition is just as valid and trustworthy as Holy Scripture, because the mind of the Church respectfully preserved things which were not recorded by the authors of the texts in the New Testament. The ancient Fathers and the faithful people took care to preserve, among other things, the unwritten tradition related to the natural grandparents of the Lord. In particular, there’s extensive reference to the grandparents of the Lord in what is known as the apocryphal ‘Protoevangelium of James’. 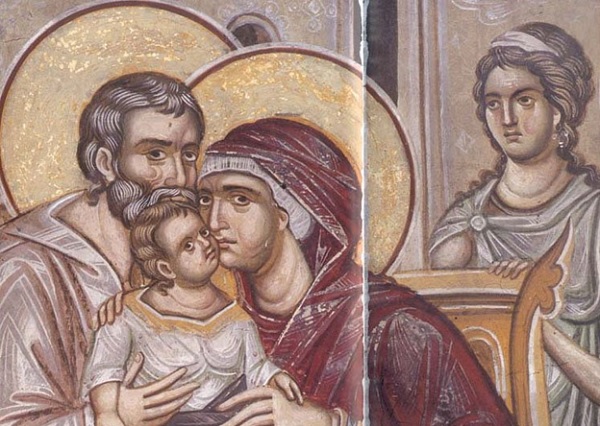 Joachim belonged to the tribe of Judah, the son of Jacob. He was the son of Eliakim and a descendant of the glorious King David. In Hebrew his name means ‘elevated by God’. He was a citizen of Jerusalem and lived there in a comfortable, large house, near the Bethesda cistern. He married Anna, the daughter of Matthan, of the tribe of Levi, and Maria, from the tribe of Judah. In Hebrew her name means ‘grace, favor’. She had two sisters, Maria, the mother of Salome, and Sobe, the mother of Elizabeth, who gave birth to John the Baptist. They both belonged to the tribe of Judah, from which, according to the prophecies, the Messiah would come. They also both belonged to the small group of devout Jews who were waiting anxiously and faithfully for the coming of this Messiah, so they prayed that he would be a descendant of their kin. Joachim and Anna lived a life of prayer, fasting and the performance of charitable works. They were convinced that the time of the Messiah’s coming was at hand. They were greatly troubled, however, by the fact that they themselves had no children and that, therefore, he who was awaited could not come from their own lineage. Anna was barren and already of advanced years. They never lost faith in God, however, and pleaded with him day and night to allow them to become parents. Childless couples were thought by the Jews to be stigmatized by God and any gifts they made to the Temple were refused by the priests there.

The prayers and entreaties of the two elderly, devout people were heard by God. In a miraculous manner, Anna became pregnant despite her advanced age. Joachim was eighty-three and Anna seventy. They immediately decided to dedicate the child to God, to whom it belonged since he had bestowed it. The time of her pregnancy was a continuous hymn of thanks to God for the great gift he’d settled on them, unceasing praise to the Lord who is able to override the laws of nature.

Nine months later, Anna gave birth to a charming little girl whom they called Maria, after her grandmother on her mother’s side. In Hebrew, the name means ‘lady’, and she was destined to become the ‘Lady’ of the world and the angels.

When the little girl became three years old, Joachim and Anna deemed that the time had come to fulfil their promise to God. They took Maria to the Temple in Jerusalem in order to dedicate her to God. Devout Jews believed that the Temple in Jerusalem was the dwelling-place of God and that he was present there. The Holy of Holies, the utterly dark part of the Temple which only the High Priest of the year was allowed to enter and even then only at the feast of the ‘Atonement’, was thought to be the throne of God. Enlightened by the Holy Spirit, the priests discerned the sanctity of the little girl and therefore didn’t take her to a special wing of adjoining buildings, where the dedicated virgins lived, but instead led her into the Holy of Holies, in order to preserve her purity and sanctity.

She lived there nourished on celestial food and attended by holy angels until the priests betrothed her to the righteous Joseph. In the meantime, her parents had departed this life, Joachim at the age of ninety-two and Anna at eighty-three.

They are commemorated royally by the Church on 9 September, the day after the great feast of the Birth of the Mother of God, as a supreme honor to their venerable persons, since, as parents of Our Lady, they, too, contributed to the implementation of the plan for the salvation of the world.

The honor paid to the holy Forebears goes back to apostolic times, when the Christians in the Church of Jerusalem honored them along with the Mother of God. Saint Anna enjoys particular honor on the Holy Mountain, where the largest skete is dedicated to her. This is where the relic of her left leg is kept. The whole of her right shin is preserved in the Holy Monastery of Koutloumousi. These holy relics are fragrant and work miracles, proving her sanctity and justifying the honor accorded to the holy Forebears by Christians of all eras.