‘Why are they dying on me?’

Dear readers, once more, in one more article, I’d like to share with you a real-life incident which happened in the parish where I serve and which has to do with something that’s troubling us in general. Naturally, this particular case isn’t unique but is one of many in which, on the pretence of protecting their health, people are staying away from the Chalice of Life, the Divine Eucharist, the ‘remedy against death’. Of course, this has incalculable spiritual consequences for those who err in this manner and also, more generally, for all those who are adding their penny’s worth to the prevalent apostasy and lack of faith of our days. The strange thing is that people then ask where God is when there’s a forest fire or some other disaster and why he allows such things to happen! The answer to ‘Where is God?’ was given by the late Metropolitan Pavlos of Siatista: ‘Where you left him. In the corner’. This is why we decided on this particular title for our article. [A well-known Greek saying, from a tale about a shepherd who doesn’t look after his animals properly and can’t understand why they die]. 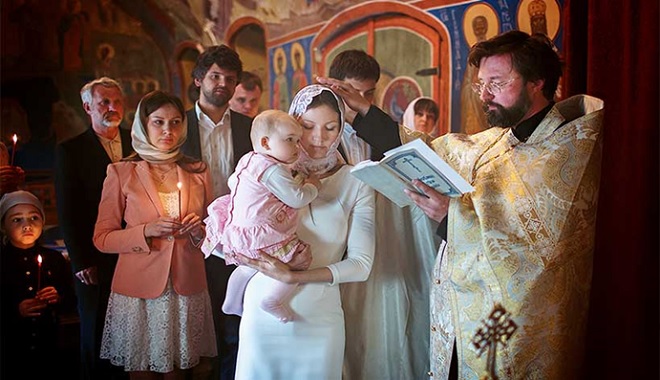 At 9:10 in the morning of Saturday 14 August, we’d finished the Divine Liturgy for the Forefeast of the Dormition of the Mother of God. We’d given out the blessed bread and were in the sanctuary consuming the last of the Holy Gifts, as always. The singer was reading the post-communion prayers, as usual. Just then, a young mother came into the narthex of the church. She’d clearly just baptized her child and wanted to leave the baptismal candle in the church, as is the custom. This young lady asked the verger: ‘Excuse me, where can I leave the candle from the baptism?’. ‘Here on the candle-stand’, he replied. ‘But where’s the baby? Did it take communion?’. The mother answered defensively: ‘It’s at home. No, it hasn’t taken communion… because of the corona virus. How can we give it communion now? It might catch something. That’s not for us’. The verger said: ‘Just a minute. I’ll tell the priest’. Then the mother responded aggressively: ‘You’re all the same’. So she upped and left, taking the baptismal candle with her.

Where to begin and where to finish with this case?  For a start, we see our Pharisaical attitude: we make the form substance and substance the form. The young lady in question came to church to discharge her formal requirement with the baptismal candle, but there was no question of the substance, which is that the child should take communion at least three times. And the excuse was supposedly the health of the child! So why have the baptism? For the child to be given a name or for it to be given Christ? If we catch something from Holy Communion, then what faith are we talking about, precisely? Here are some hypothetical questions: After the baptism, didn’t the young mother and her family have a celebratory meal? Didn’t they come close to each other, with the danger of being infected? And don’t they go to stores, playgrounds, the shore, with so many other people? Aren’t they afraid of infection there? Is it only with Holy Communion that they draw the line? The answers are obvious and are the same as what we’ve called in other articles ‘selective sensibilities’.

From the day the woman’s churched and, of course, at the baptism, we declare that the child doesn’t belong to us but to God. We, the parents after the flesh are simply co-creators. So who are we, by what authority, by what right do we keep the child away from God and communion with him through the Divine Eucharist? We’ve been influenced by a whole host of ‘specialists’ who, through their science, promote their atheism and abandon our experience of two millennia: that nobody’s ever been infected via Holy Communion. Not in the past, not now and not in the future. So long as there’s faith. But since there isn’t, we’ll suffer what we suffer and mourn what we mourn, because we neither come to our senses nor remain silent in the face of the mystery. Amen.