‘Humility is an anonymous grace of the soul, which can be named only by those who know it from experience. It’s inexpressible riches, it’s an appellation of God, a gift of God’ (Saint John the Sinaite, The Ladder of Divine Ascent, discourse 25, 3).

We need to be very careful with the virtue of humility. You may think you have it because, perhaps, you see yourself as a simple sort of person, but, in fact, you’re working with your egotism and with the evil devil. This is because false humility presents itself in a variety of guises which have no more than an external resemblance to it. Sanctimoniousness, for example, and unctuousness, which are hypocritical ways of behaving and speaking that merely imitate the original, are the most common forms of the distortion of humility. It’s no accident that the great Elder of our times, Saint Porfyrios Kavsokalyvitis used to say: ‘Call it holy humility, not just humility, because that may be fake’. 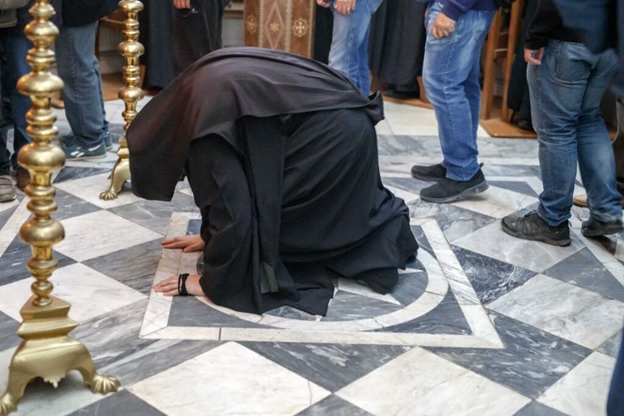 Even the true image of it in the life of saints may not be what it really is; we may see signs of its presence, rather than actual humility at its core. There are two reasons for this. In the first place, it’s one thing for someone to be humble-minded, another to strive to be humble-minded and yet another to praise those who are humble-minded (ibid, 18). Secondly, it’s the raiment of the Godhead itself. And it’s this second one that the saint is stressing when he says: ‘it’s an anonymous grace of the soul’. Why? Because it manifests the presence of God himself within a person. This is the God who dwells beyond all names, and is therefore ‘anonymous’, without a name. So when we talk about humility, in the end we’re talking about God himself, who is certainly love, but is also humility. These two are indissolubly linked, as the Lord himself revealed to us: ‘God is love’, and ‘Learn from me that I am meek and humble in heart’. Saint John says, in wonder: ‘Love and humility. A sacred pairing’ (ibid 36).

So, if we’re looking for love, or, indeed, any other virtue, and humility is absent, we won’t find anything. And if it only appears to be there, it’s hypocrisy and guile: ‘Remove humility and all our achievements are worthless’ (ibid 15).

And the final result? As soon as we begin to have an inkling of this holy humility, that is, as soon as the Lord appears actively in our lives, all temptations cease. The demon itself takes flight. Let us recall the words of Saint Anthony the Great: ‘I saw all the snares of the devil laid out on the earth. I was terrified, I sighed and said: ‘How am I to pass through without falling into them?’ And I heard a voice telling me: ‘Only with humility’.