Saint Dimitrios is the protector and patron saint of Thessaloniki, a saint from whose relics myrrh flows and also a Great Martyr.

There are actually conflicting accounts in the sources, but the overwhelming view is that he was born and bred in Thessaloniki. As a young man, he rose through the ranks of the Roman army because he was a very talented soldier. How he came to be introduced into the Christian faith we do not know, though it was not as usual as one might think for a high official. There were Christians even in the Roman imperial family: Theodora, the wife of Galerius, for example, who was beheaded in Thessaloniki on the orders of Emperor Licinius (ca. 315). 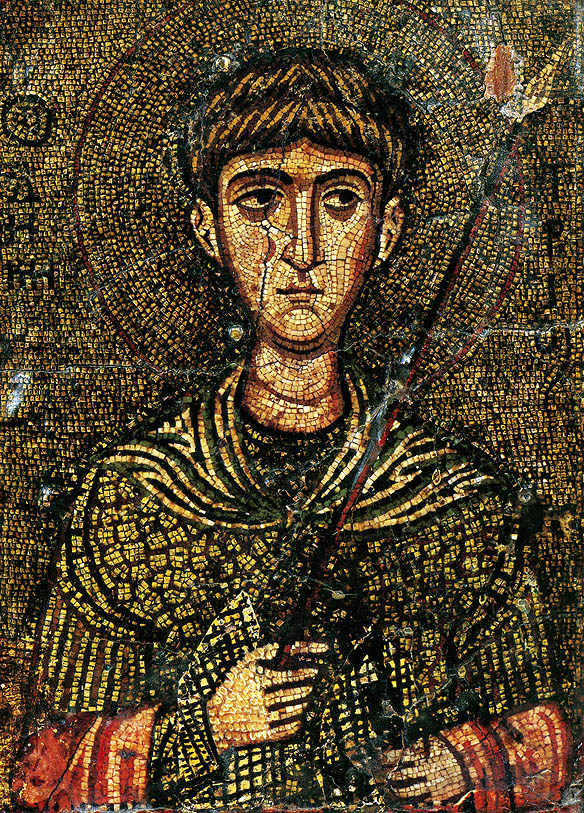 What is unusual about Saint Dimitrios is that he didn’t keep the faith to himself, but did his best to spread it, especially among the young people of the city. There was a place called the “Refuge of Christians”, and it was here that, at risk to his career and his life, he set about teaching others about the faith. One day, while he was doing so, he was arrested by soldiers sent by Galerius Maximianus. He was then paraded through the streets of Thessaloniki and taken to the place of his confinement, the baths below what is, today, the sanctuary of the church of Saint Dimitrios. He suffered torture, both because he was held to have betrayed his high rank and because he openly declared his faith.

In prison, in what is now the crypt, Dimitrios was visited by his friend Nestor, who wished to receive his blessing before he, Nestor, fought as a gladiator against Lyaius in the arena of the city. Dimitrios revealed to Nestor that he would defeat Lyaius and be martyred for Christ, as, indeed proved to be the case.

When Nestor arrived at the site of the combat, he shouted out: “God of Dimitrios, help me!” Much to everyone’s surprise, he defeated Lyaius, who was an experienced gladiator and a favourite of the crowd. But this confession on the part of Nestor conspired to hasten the martyrdom of Saint Dimitrios. Roman soldiers were despatched to the prison and Dimitrios met his death in the year 305.

Other Christians managed to salvage the body and laid it in his first grave, which was the well which lies within the church, on the northern side of the solea. This is also where the saint’s spring of holy water is. This holy water, together with the myrrh which flowed from the saint’s grave, passed along channels and arrived at the site of what is now the crypt. Here the faithful collected both water and myrrh in little phials of glass or clay, or in what were known as koutrouvia, which were made of lead and, on one side bore a figure of Saint Dimitrios and on the other a depiction of the Mother of God or Saint Theodora, from whose relics myrrh flowed, too. Entry to the crypt was effected from today’s Saint Nicholas Street. 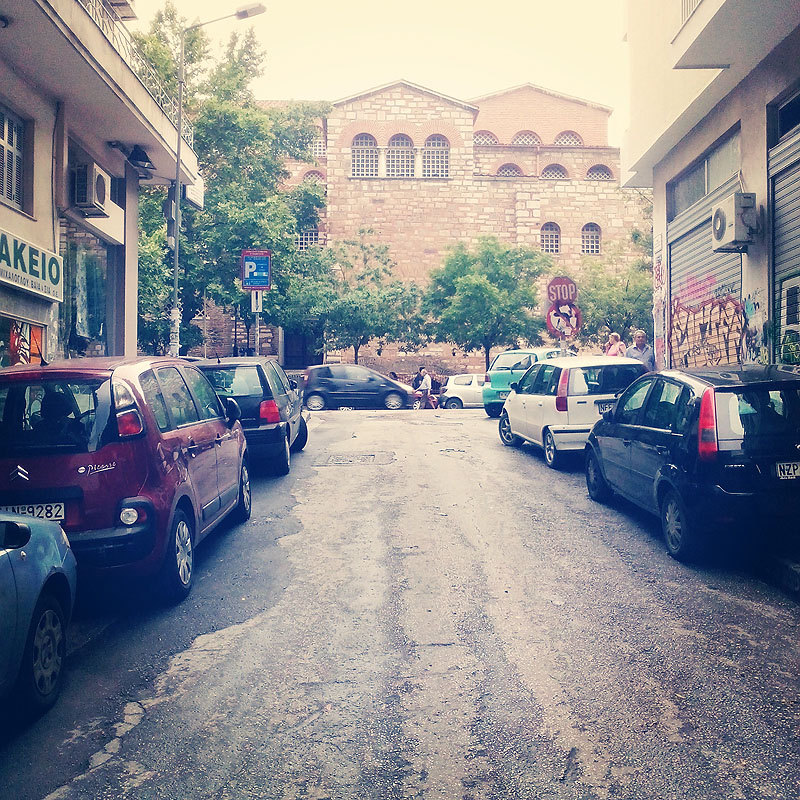 Later, the body of the Myrrh-Yielder “was laid to rest” within the church, on the northern side of the central nave. Today at this spot, a hexagon can be seen which was the base of the ciborium of the martyr. This raised ciborium, made of wood, was invested with silver and gold. For this reason, this valuable covering was repeatedly the occasion of pillaging on the part of the various conquerors of the city. 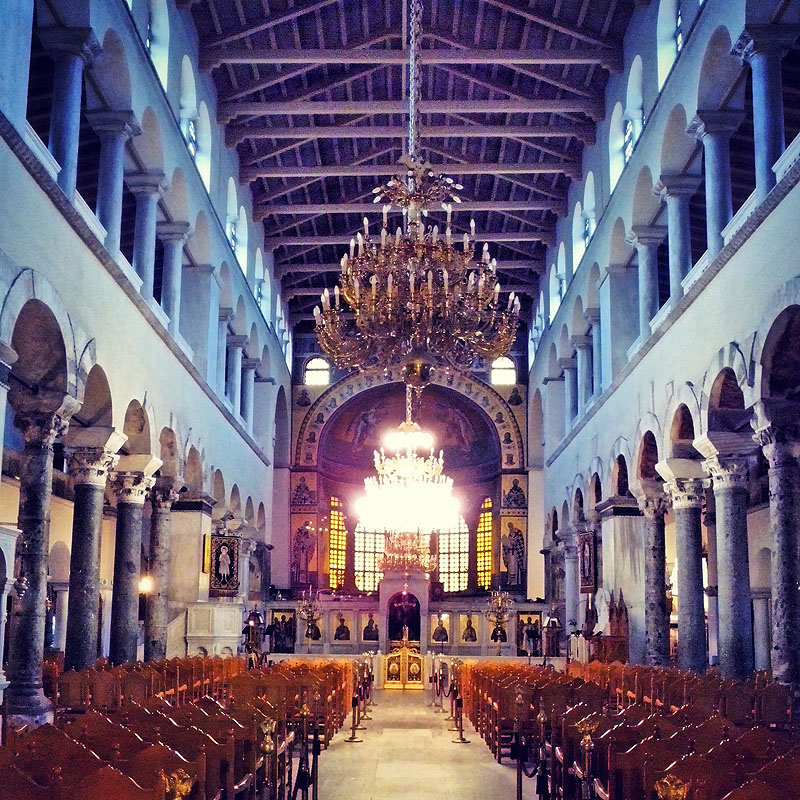 In Byzantine sources, many miracles are mentioned. One such is the following, taken from Prof. Ch. Bakirtzis’ book, The Miracles of Saint Dimitrios: The governor of Illyricum, Marianus, was staying in Thessaloniki, in the praetorium to be exact, which was quite a distance from the church of Saint Dimitrios, probably in Galerius’ palace. This high official suffered from paresis, or loss of voluntary movement. This meant that he had to lie in bed, with none of his limbs functioning, unable to move at all and incapable even of putting food into his mouth without assistance.

Marianus had a vision of the saint telling him to trust in divine providence, because “every illness which attacks people is sent by the providential power of our creator and is for the good of the sufferer”. And the great martyr remarks: “… I shall soon release you from your bodily ailment. Come to my house then and you’ll see the glory of God revealed to you through me”. Thereupon two slaves of the governor, at his behest and because he was unable to move in any other way, tied their hands together crosswise and carried the patient to the church of Saint Dimitrios.

When the governor had been set down on the floor of the church, he prayed fervently, with humility and repentance, and requested those with him to lift him and place him on the mattress they had brought. He then saw the saint again in a vision, telling him: “Christ has healed you, our God Who sets to right those who are broken”. And at once, shedding copious tears the governor sat up on the mattress and asked to be given clothes and shoes immediately. The people with him went and borrowed them from neighbouring houses. Now dressed, the governor went by himself to the ciborium under which rested the holy relics of the saint in order to thank him for the health he had granted him. When he left the church, he refused to ride on a horse and left for the praetorium on foot, only to return shortly with precious gifts (gold and silver), which he distributed to the poor of the town.

*Alas, the sobriquet of Saint Dimitrios has so far proved to be untranslatable. It literally means “from whom myrrh flows” as, indeed, it does, but unfortunately the  verb to flow in English is not transitive (water flows; it is not flowed). Alternatives such as “discharger”, “outpourer” and so on are obviously out of the question, while effusor may sound like a (ghastly) possibility, but means “a wastrel”. For the nonce, then, we have settled for “yielder”, but if any reader has a better idea we would be very pleased to hear it.