Saint Romanos the Melodious – The Nightingale of the Church 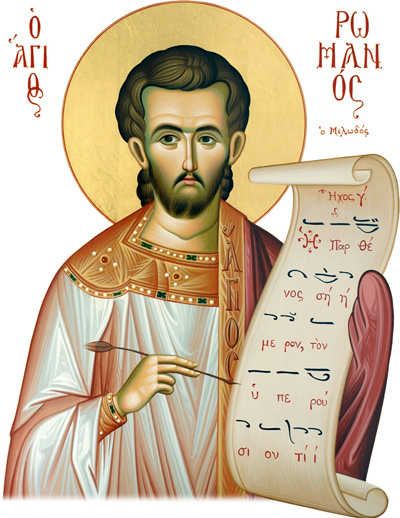 Back in the old days, he was a child raised in the Church, the right hand of the priests. He attended to all the jobs that were to be done and was always the first to get to the services. He knew the psalms and prayers by heart, and served with reverence in the altar at every liturgy.

He really enjoyed singing. Sometimes he’d make his way to the choir stall, with the singers, and wanted very much to sing to God.

But they kicked him out: the boy had a tin ear. So much so that they didn’t even know what he thought he was singing. They couldn’t bear to listen to him. They used to say to him: ‘Romanos, do whatever else you want, just don’t join in with the singing’.

One evening, in the church of Our Lady, where there was a wonder-working icon of the Mother of God, Romanos fell to his knees. With tears in his eyes he begged the Queen of the Heavens to give him the gift of singing sweetly. 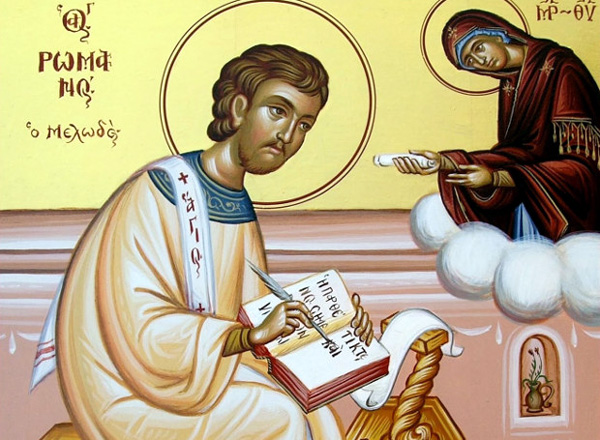 Christmas Eve: the church of Our Lady was packed. And right next to the choir stall, there was Romanos, silent and humble. He didn’t dare open his mouth to join in the singing. They’d all poke fun at him, laugh at him and tell him to stop. He turned his eyes to the icon. Prayed silently. As he was praying, the boy fell into a light sleep and he had a wonderful dream. He later said that the Mother of God herself came out from her icon and moved towards him. She was holding a kontakio, a rod, (something like a rolling-pin) around which they rolled the texts of the hymns and psalms. She gave it to Romanos and told him to swallow it. He did so and woke up at once.

He took heart and went to stand next to the choir-master, who’d opened the page for the hymn to the Virgin. Romanos took a deep breath and began to sing, just as he’d always wanted to, with an amazing melody: ‘Today the Virgin gives birth…’. 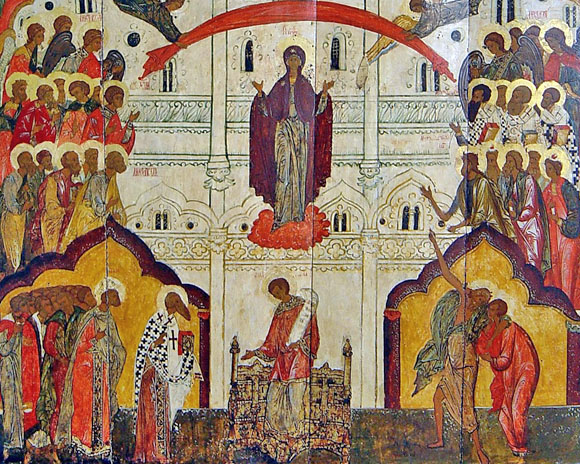 The domes of the church resonated. The bell-towers reverberated and Romanos the Melodious, who until just then had been a tone-deaf boy, praised Our Lady the Mother of God for his gift. Romanos wrote more than a thousand hymns for the saints and the Mother of God. The Church called them kontakia (rolling-pins) in order for us to remember the miracle of young Romanos, the nightingale of Orthodoxy. We celebrate his feast-day on 1 October.