The frenzy which is the result of the influence of demonic forces is described in stark language in the case of the man possessed at Gadara. This  agitation is expressed in the power of evil, which, in many and various ways, troubles us, tortures us and sometimes literally rules us. Today we’ll look at one tragic characteristic symptom of this: the rupture which sin causes.

It’s a fact that, like all spiritual and bodily sicknesses, being possessed is linked to the reality of sin and to the presence of evil and corruption in the world. In the episode of the man possessed in Gadara, the dominion of the devil is apparent, bringing about human suffering and collapse. It’s a situation in which a force hostile to us poisons a person’s life, contriving ways and means to destroy them and to bring them to the end of their tether and to despair. When asked his name, the man replies ‘Legion’, because he was the abode of many demons. We see here very clearly the fragmentation of the personality, about which so much is being said these days. 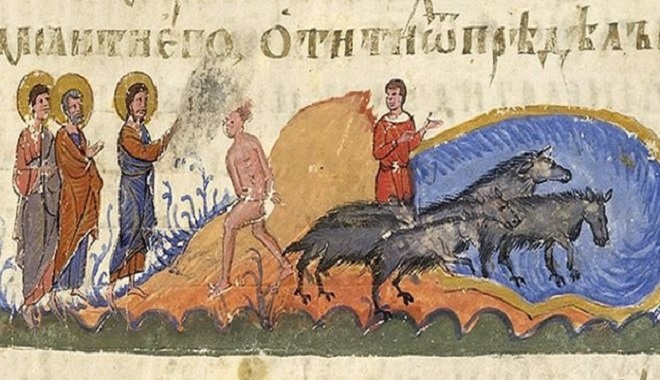 The theology of the Church gives its own answer and interprets this phenomenon in the light and perspective of Christ’s truth. Our fall into sin brings about internal division in people and causes rupture and separation. God unites; the devil divides. God creates us as a unified, psychosomatic, personal being, but the devil splits and fragments us into an impersonal mass. This is confirmed by people’s egotistical preferences and contrary behavior. Separation from God, the source of life, mortifies our internal, spiritual powers and estranges us from the world and from other people. We ourselves and our egotism then become the center of the world and of our pursuits. Having lost God as our reference point, we’re inevitably subjected to the law of impermanence and death. Our personality is broken apart by our  conflicting interests and fleeting preferences to such an extent that the human heart, the center of our existence, loses its harmony and equilibrium to a whole host of different forces. A variety of interests, roles and patterns of behavior which are disjointed break up our inner world and make for a fragmented and chaotic situation. People who are divided internally and isolated externally can neither feel nor be redeemed.

The presence of Christ upset the people living in the region of Gadara. Blinded and absorbed by material profit, they were unable to see the meaning of the miraculous cure of man. Their conscience wasn’t troubled about the illegal trade in pigs in which they were engaged, in contravention of the prohibition in Mosaic law. Since their interests had been affected, they expelled Christ from the area. They were guided by their minds and interests. They rejected and fought against anything which didn’t serve their plans and pursuits, considering it not merely undesirable but also dangerous. They dwelt on the façade and missed the essence. Countless people follow the same tactic today. They expel Christ from the borders of their life and the ground of their soul. And here the vicious circle of sin and inner fragmentation is experienced in a particularly harsh manner.

The dehumanization of the person in today’s society is blindingly obvious. People who are fractured internally are bound to function in a disjointed way. They want one thing but say and do something else. Body and soul don’t work together in harmony. They compete and contend.

My dear brothers and sisters, once the man in today’s Gospel reading was cured of what had been tormenting him, he wanted to stay with Christ. He’d experienced the Lord’s love and grace which united his existence that had been broken into pieces by the demons. The inhabitants of Gadara expelled Christ. Internally divided and, of course, unable to understand their condition, they saw and felt the power of Christ, but not his love. They didn’t want to see beyond their daily routine; didn’t want a different perspective. Two different choices for human freedom. One saves, the other destroys. Which do we choose, then?