In the text of the Old Testament, we read that, when Cain killed Abel, God asked him where his brother was. Still angry, he retorted: “I don’t know. Am I my brother’s keeper?”. This question, so full of hate and indifference, is answered by one of the most important parables of the Gospels, which we shall hear in tomorrow’s reading (Luke 10, 25-37). It’s the parable of the Good Samaritan, which is well known the world over and which answers Cain positively: Yes, people are their brother’s keepers and we ought to love our neighbours with all the power of our hearts. 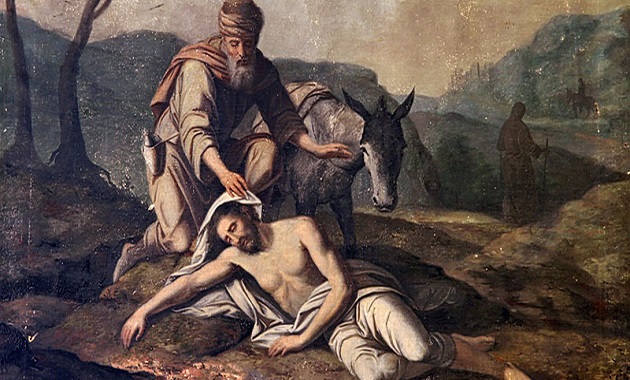 The details of the parable are well enough known: a lawyer wanted to “goad” Jesus and asked Him how to gain eternal life. The Teacher told him that that is achieved through the double command of love, by loving God and your neighbour. And when the “wise” lawyer asks him who his neighbour is exactly, the Lord relates this special parable.

A man was going to Jericho, and on the way fell into the hands of robbers, who took all he had and then left him half-dead. After this a priest  and Levite passed by the spot where the man was lying but didn’t stop. But a man of a different faith, a Samaritan, did stop and cared for the unfortunate man, whom he didn’t know. He set him on his beast of burden, took him to an inn and paid the inn-keeper to take care of restoring the wounded traveller to health.

This narrative provides the answer to the traps that the legal expert attempted to set for the Lord. And, indeed, not merely an answer, but something more: He told the man not only who is our neighbour, but also who becomes our neighbour. Our neighbour isn’t defined in theoretical terms, but arises in practice. Our works indicate whether we love God and our fellow human beings and also how much of our daily lives-especially our time- we’re prepared to give up for their sake.

As we saw, the Samaritan stopped, interrupted his journey, put off his destination, his tasks, in order to interest himself as much as possible in his helpless fellow human being. He set aside his schedule, paid out money, in order to look after a person who not only was completely unknown to him, but also belonged to a rival and “hated” nation. It’s this personal cost that characterizes real love.

The choice of a foreigner and believer in another faith, but who is the one who does good is a point in the parable which should not escape us. Helping one of your own, or somebody from whom you can expect some sort of recompense is important, certainly, but only of relative value. But to offer assistance to someone whom you traditionally dislike and have been taught to avoid makes the charity even more worthwhile.

Real love goes beyond human divisions and rivalries. It defeats hatred and bias. It transcends personal bitterness and extends to the whole of humanity. without contrivance or ulterior motives. This is what the Lord has taught us and which we ought to do: to look after, care for and “keep” our brothers and sisters.