It’s not uncommon that concepts associated with the Bible are misinterpreted, almost ‘abused’, to their detriment. The misinterpretation of a single word can lead to mistaken notions and conclusions, or even to a misguided attitude to life. One such case is ‘God’s anger’.

[Let’s look first at the etymology of ‘anger’. It can be traced back to a Proto-Germanic word *angazaz which meant ‘grief’ or ‘sorrow’ but gradually came to mean vexation. By the time the Bible was translated into English, it had acquired its modern meaning. (The original Greek text has the etymology of οργή here)]. It is in the modern sense that we encounter it in the Old Testament, as a description of the Face of God, perhaps because this was what the conditions of the time required. Isaiah says: ‘For the heaven shall be enraged, and the earth shall be shaken from her foundation, because of the fierce anger of the Lord of hosts, in the day on which his wrath shall come’ (Is. 13, 13). We find the word ‘anger’ frequently in the Old Testament, before the Incarnation of the Word, but as we shall see, there’s an inkling of its real meaning in these books. People gave human attributes to God, though God isn’t, ‘in essence’ angry, nor does he have any other human behaviors or weaknesses. We know that God is love, though this is much more apparent in the New Testament (cf. 1 Jn. 4, 7). 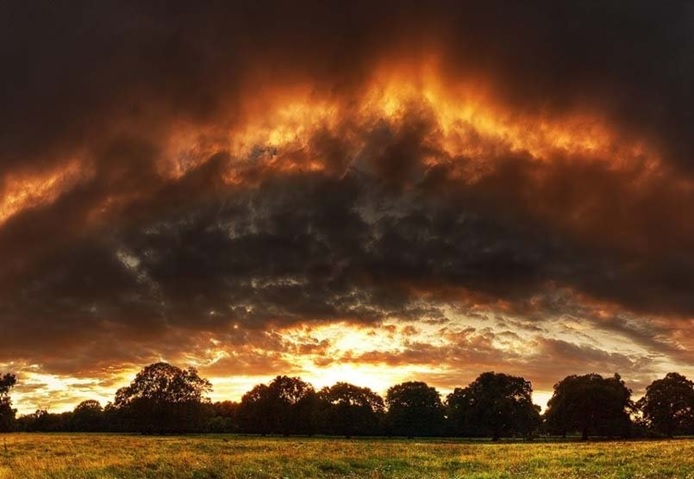 But if God doesn’t  become angry, how are we to explain the phrase ‘God’s anger’.

In fact, it has to do with the suspension of his grace towards us. From as early as the fall of our first ancestors, ‘anger’ entered human affairs. After the fall, people were born by nature as ‘children of anger’ (Eph. 2, 3). Adam and Eve were naked and ashamed. They had now lost their inheritance: the divine armor which shielded them from the machinations of the devil and fortified them in their efforts to cut off their passions. Where there is the grace of God, it helps us to see, to live differently in the darkness. It’s the grace of God which makes our life beautiful and complete. Where grace is absent, it’s expressed as ‘God’s anger’. The Gospel of Saint Matthew (3, 7) talks of ‘impending anger’ meaning that which awaits those people who remain unrepentant until the end of their lives. That is, those who enjoy the darkness and have become accustomed to it.

The faithful are called upon and urged to quell this innate anger (Eph. 4, 31). But grace comes and goes, depending on the manner in which we live and act. When we repent, we attract grace again and are graced anew. Besides, the one thing we know for certain about God is that he pursues us, out of kindness. As we sing in church: ‘Your mercy will pursue me all the days of my life’.

The Fathers deal with this matter, particularly Saint Maximos the Confessor who tells us that ‘the anger of God’ is the painful feeling suffered by those he chastises. Through this, God brings us to our senses and to humility, when we see the arrogance of our mind. He brings us to an awareness of our weakness, which we can then cast out from our heart. It acts therapeutically. Saint Maximos says: ‘God’s anger is a cessation of the provision of his divine gifts and occurs for our good, when our mind is puffed up and exalted and boasts that our successes are our own, rather than achievements granted to us by God’.

When, through ‘anger’, we have a suspension of the grace of God, we become ‘sick’, and, unless things change we become moribund, living dead, bereft of joy. We have no interest in anything- not merely things spiritual but even things that once  upon a time gave us worldly joy. This suspension may, on occasion, happen through no fault of the person concerned, but purely for their edification, and only to those strong enough to bear it.

Finally, we must strive in life not to expel the grace of God within us, at our own behest. Through our deeds and thoughts. At every Divine Liturgy we ask: ‘For our deliverance from all sorrow, anger…’.At our baptism we received grace in plenty and many gifts from the Holy Spirit. These require effort and care if they’re to be increased.

Let us end with an admonition from Saint Maximos: ‘As for those who are proud of their actions, the dishonorable passions await; as for those who boast of their knowledge, righteous judgment allows them to make mistakes in seeing the truth’.