Saint Amphilochius of Iconium: what was the hook for the devil?

Saint Amphilochius of Iconium, whose feast we celebrate today, is among the great theologians of the 4th century and, indeed, belongs to the group of Cappadocian Fathers. He was born in Diocaesarea in Cappadocia to wealthy parents and received an excellent education. He was related to Gregory the Theologian and was an advocate by profession. He also had a close spiritual bond with Basil the Great. As bishop of Iconium he showed a flair for pastoral and preaching activities. Of particular importance is his adherence to the Dogma of Nicaea (325) and his contribution to its further development and completion by his participation in the 2nd Ecumenical Synod in Constantinople (381). 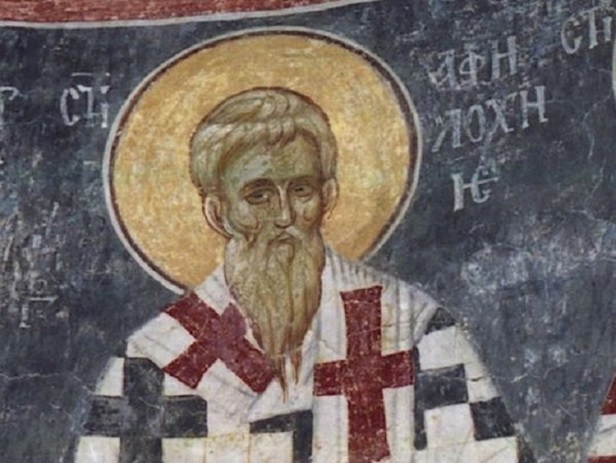 He proved to be an influential Church writer, often providing original concepts on the interpretation of Scripture. His work ‘Against Heretics’ on ‘Father, if it be possible, may this cup pass from me’ may be considered one of his most robust theological approaches. In this work, Saint Amphilochius, faithful to the Trinitology and Christology of the Orthodox Church, reinforces them further through his interpretation of the agony of Christ in the Garden of Gethsemane, before his passion.

The following is an illustrative extract from this text:

‘I willingly undergo death out of love for humankind; and again, by dispensation, I show faintheartedness in the face of death. I show this faintheartedness in order to deceive death. As in the wilderness, had I not shown signs of hunger, the devil would not have approached me. This is why I hungered: so that he would not think this was the new Adam and would set his snare. This is why here, too, [Gethsemane] I offer timid words, as a bait, in order to ensnare death within me. Because the devil has seen me perform many miracles: I gave strength to the paralyzed man, I gave speech to the tongues of the dumb, I opened the ears of the deaf, I gave sight to the blind, I calmed the troubled waters of the sea, I staunched the woman’s flow of blood when she barely touched the hem of my garment, I raised Lazarus from the dead by my command alone, I raised Jairus’ daughter and I called the son of the widow back to life. Since he [the devil] saw all of this and was convinced by it that I am the Son of God in the form of a man and since he knew what the prophets had foretold, he would be afraid to nail me to the cross and deliver me to death, so that I would not free the dead by also assuming the role of a dead person.

So what do I do to transform the timidity of the devil into paranoia and to goad him into impelling me towards death? I run so that he pursues me, I am fainthearted so that he gains heart, I use simple words so that he thinks I’m merely one of the many and that when he attacks me he will swallow me. Because, unless he swallows me, those he has already devoured will not be disgorged.  These are the reasons why I offer words of faintheartedness: to undo the deceit by deceiving the deceiver. He deceived Adam with treacherous words; I deceive the traitor through the pretence of timidity. He was the one who invented deceitful words in order bring people to perdition. I offer words of faintheartedness in order to save the world. I am a fisherman who fishes for fishermen. A fisherman baits his hook with a worm and then casts the rod. Sometimes he lets the hook float, or he may drag it or send it down to the depths, all in order to convince the fish that the worm is moving and that it should take a bite. In the same way, I hide the hook of my divinity in my body, just like a worm in fishing. ‘For I am a worm, not a man’ [Ps 21, 7]. I sometimes attract death by my [apparent] faintheartedness and sometimes I am boldly dragged along on the hook so that the devil will be carried away and attack my flesh. In this way he will have been fooled by the hook of my divinity, trapped and neutralized. And so the prophecy of Job will have been proved: ‘You will catch the serpent on the hook’ [Job 41, 1].