The Feast of the Entry of the Mother of God, an Example of Effective Communication

The feasts of the Mother of God are a matter of joy for the whole Church. Our Lady, who is honoured at these, is the person who glorified the whole of the human race when she answered God’s invitation to participate in His incarnation, thus ushering in the dawn of the time of our salvation.

The feast of the Entry of the Mother of God reminds us that Our Lady is the most important person in the task of our salvation. Without her presence, our return to paradise would have been nigh impossible.

This feast was established in the 6th century, in Jerusalem, on the basis of the ancient tradition of the Church and is also mentioned in texts by Saint Sofronios of Jerusalem (634-638). 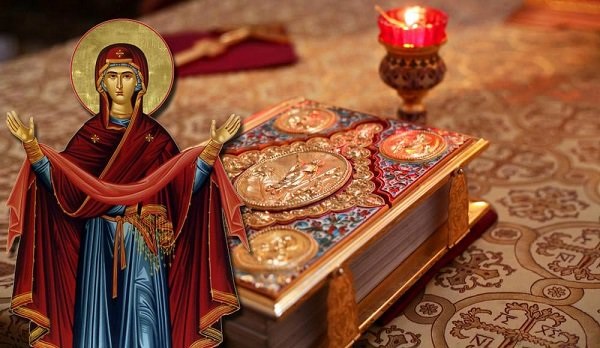 At this feast of the Entry of the Mother of God, we honour the fact of the dedication of Our Lady, then three years old, by her parents at the temple of Solomon. Our Most Holy Lady, the Mother of God was born to elderly parents, Ioakeim and Anna, who had asked God to give them a child whom they could dedicate to the temple. Her parents gave three-year-old Mary into the hands of Zachariah, the priest (who was later to become the father of Saint John the Forerunner) and he took her into the altar, to be sanctified and, in due course to become the Mother of God.

In the icons of the event of the Entry of the Mother of God, we see Our Lady in the centre, as a little girl, though she has about her all the holiness of the future Mother of God. Zachariah the priest rests his hand affectionately and reverently on her head, blessing her and welcoming her into the holy of holies. He’s wearing liturgical vestments and the insignia of the priesthood on his head. Our Lady stands before him in holy silence her hands raised respectfully towards him. This denotes the willingness and joy she feels at entering the Lord’s Temple.

Her elderly parents are also depicted showing reverence and holy emotion. They put her in Zachariah’s hands with a very expressive gesture which reveals their desire to fulfil their promise to the Lord by dedicating to Him the precious child they’d been given after many years of prayer and fasting, deep into their old age. 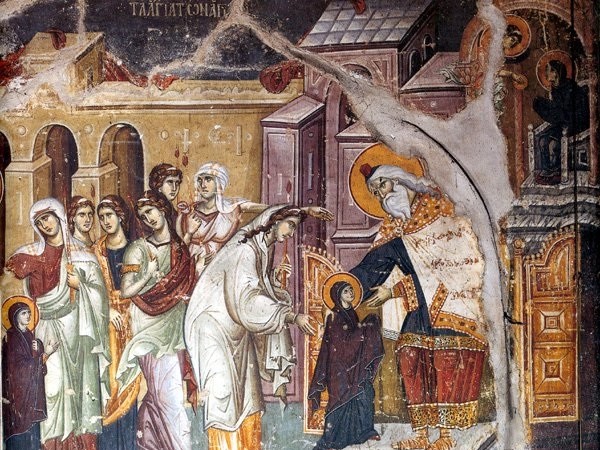 The feast of the Entry of the Mother of God teaches us prayer as a way of life, since it is itself a model and instruction concerning prayer. Because they had the personal problem of infertility, Ioakeim and Anna gave themselves over to persistent, intercessionary prayer, so that God would take heed of their request. And when God did accede to their prayer, they dedicated their three-year-old daughter to the holy of holies as a gesture of gratitude.
With the entry of Our Lady into the temple, her constant prayer to God begins. She enters the holy of holies and there directs her mind to God and concentrates her whole being on contact with Him. The prayer of Our Lady was entirely free of material or spiritual commitments because it became a way of life, a personal experience and a two-way relationship with God. While she was in the holy of holies, God spoke to her more than she did to Him. It was this experience of prayer which led to God becoming human and saving the world.

At a time when people don’t know the right way to communicate with their neighbours, the feast of the Entry of the Mother of God is presented by the Church as the answer to today’s trammels on communication. Modern society is characterized by unhealthy interpersonal relations. We need to open up our heart and there, in the deepest recesses of the Holy of Holies of our existence, listen to the messages from God. In the depths of our heart we’ll develop our cooperation with Him, with the aim of encountering each other at the end of the journey. Through prayer of the heart and with the three-year-old Mother of God as our guide, we can, in the end, find the meaning of real life, which we’re missing so profoundly.