The Feast of the Entry of the Mother of God: the Prelude to our Reformation

‘The Lord has glorified your name throughout all generations. Through you, the Lord will reveal his redemption to Israel in the last days’ (Protevangelium of James, 7, 2).

The feast of the Entry of the Mother of God, and the Church remembers the fulfilment of the  promise of the forebears, Joachim and Ann. A few years before the incarnation of the Word, a barren, childless couple, Joachim and Ann, who were devasted at their inability to have children, were told by an angel of the Lord that they would have a child who would loose the curse which tormented them. The elderly couple’s daughter grew and, at the age of three, the promise of her parents to God was fulfilled and she was dedicated in the Temple of Jerusalem. 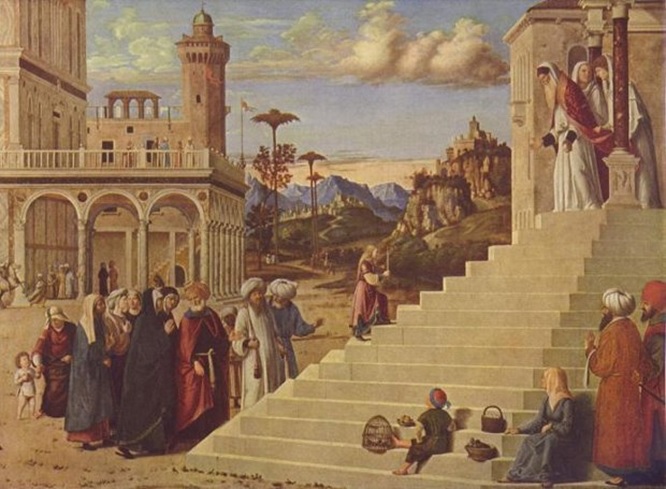 The narrative of the feast of the Entry of the Mother of God comes from the apocryphal, non-Biblical tradition, in particular from the ‘Protoevangelium of James’. In the relevant portion of the book, (7, 1- 8, 1), there is a description of the intention of the forebears to fulfill the dedication of Mary to God from as early as her second year. On the initiative of Ann, however, the transfer of the Mother of God to the Temple was delayed until she completed her third year, so that she would be aware of what was happening and would not fuss and ask for her parents. George of Nicomedia wonders at the behavior of the Mother of God at her separation from her parents, noting that she did not react as any other three-year-old infant would have done, but submitted to the divine will.

According to the Byzantine emperor, Leo the Wise, the entry and dedication of the Mother of God at the Temple is a gift to God. The gift of Mary in the Temple served three aims: a) the assuaging of divine wrath over the disobedience of Adam and Eve; b) the remaking of human nature which had been blemished by the ancestral sin; c) the securing of God’s mercy for the comfort of the human race.

Germanos of Constantinople tells us that the Mother of God was set in the Temple of God as a foundation stone and offered to him as a candle more treasured than gold or precious stone, while the forebears are compared to two interflowing rivers which have their source in paradise.

The age of the Mother of God at her entry into the Temple is an important factor for Patristic tradition. Apart from the intrinsic sanctity of the number three, according to Germanos and Tarasios of Constantinople, the three in Mary’s age is linked to a variety of hagiographical instances in both the Old and New Testaments. George of Nicomedia interprets her age of three through the prism of the Church’s triune dogmatic teaching concerning God and says that it expresses the spotlessness of the Mother of God, through whom the power of the Holy Trinity entered the world, fulfilling the Father’s promise to save humankind through the person of Christ. According to the same author, the indivisibility of the Triune God is thus revealed, as is the reunification of the divided world in common worship of the one God. This is due to Mary’s contribution to the implementation of God’s providential plan.

The entry of Virgin into the Temple and her nine-year sojourn there is the preface for the preparation of the incarnation of the Word and for his redemptive mission. The feast of the Entry has a direct parallel in that of the Reception of the Lord [2 February], at which the forty-day-old Christ was taken into the Temple by the venerable Symeon. The priest Zachariah welcomed the Mother of God and brought her, without protest, into the Temple in Jerusalem, just as Symeon, as another Zachariah, took into his arms her Son, the Son of God, at the same time prophesying concerning the Savior’s redemptive mission.

The Entry is not some ordinary commemoration of a particular event, but the beginning of our preparation for the implementation of the plan for our salvation through the person of Christ. It is a declaration of God’s promise to return our human nature to its ancient glory. It is the beginning of our life in Christ, with the expulsion of our former self. The message of the feast is that we must accompany the Mother of God not on the upwards steps of the earthly Temple of the Law, but on those leading to the celestial altar. The Mother of God calls upon us to follow her and to prepare ourselves, by cultivating God’s gifts with which we were endowed on the day of our baptism. The Mother of God calls upon each of us to be an instrument and vessel of divine grace, just as she became the most honorable and pure vessel of the divine presence through her part in the incarnation of the Son and Word of God.