‘Just then a lawyer stood up to test Jesus’. This ‘lawyer’ [i.e. a student of the Law of the Old Testament, rather than an advocate in a court] approached Jesus Christ, supposedly to ask what he should do to inherit eternal life, but in fact out of a desire to provoke Him. The lawyer was an educated man of his time who studied and interpreted the Law and it was his aim to trap Jesus into a discussion. Instead he received a much-needed lesson. Jesus got him to understand that it’s one thing to be well-educated and play at being clever and quite another to be a good and useful human being. Wisdom isn’t a matter of knowing who your neighbour is, but knowing what you should do for that person. Everybody knows and says lots of things, but very few do what they should. This is why we see in this parable the lawyer asking one thing and Christ answering another. The lawyer asks: ‘Who’s my neighbour?’, and Christ answers: ‘Go and do likewise’. The lawyer asks who’s supposed to be his neighbour and Christ sends him off to demonstrate his love to every person. Because each and every person is our neighbour. Christ doesn’t tell him that every person’s his neighbour, but what he should do for every person, who is his neighbour. And this is what we Christians need to do on every occasion: not to know a lot and be wise, but to have love and to do what we should. 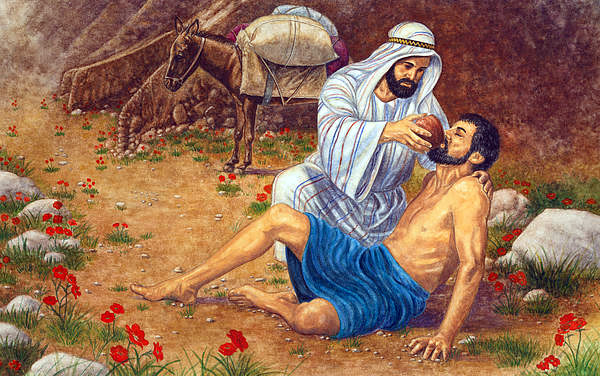 Lots of people these days, who aren’t even wise, sit around day and night and spout words. They talk about justice, equality, peace, democracy and lots of other things like that. Christ would tell them: ‘Go out and do something, because what you’re lacking isn’t words but action and stewardship. So get out and actually do what you’re talking about. Show, in practice what these values of justice, equality, peace and democracy that you’re shouting about really are. Practice what you preach’.

In this parable of the man who fell into the hands of robbers, Jesus Christ taught something new, which the world hadn’t known until then. He told us that our neighbour is not just all people, but, every time, one particular person. These days everything’s full of hypocrisy. We’re so concerned about what’s happening at the other end of the earth, shouting about slaves we’ve never seen, killing each other on behalf of peoples we don’t know, when all the time there are particular people, before our eyes, who are expecting things from us. We shout about humanity, but forget the human person; we kill each other over foreign nations and lay our own lands waste; we want equality, but if people are depending on us for work, we treat them like slaves; we’re supposedly interested in justice but live off the labours of our employees; we proclaim democracy, but act tyrannically towards the people in our own home. All of this is because we started out on the wrong foot: we ignore those close to us and prefer to deal with the plight of those far way; the goal of our efforts is humanity, so we ignore the individual; we ignore our neighbour, but care deeply for those far away. In reality, we don’t care about anything, but it suits us, because it’s clever and comfortable, to shout about ideologies and then to get on with what we do.

But Christ doesn’t want us as ideologues; He wants us as believers. He doesn’t want us to bleat about justice, but to be just; He doesn’t send us out to look for those who are miles away, but expects us to look after those who are close. Christ doesn’t know what ‘humanity’ means, but He does know who the individual neighbour is. And even more simply and practically, He knows what the individual neighbour needs in practice. This is why, when people ask him hypocritically, as the lawyer did, He sends them not merely to find out who their neighbour is, but also to do what the neighbour needs. Listen, my friends, to what Christ tells you and do as your ancestors did before you. Neither Christ nor your ancestors have told us lies. They may not have known much, but they had practical wisdom. They believed in God, respected the Church, loved their land, did their work well and knew nothing about ideologies.

Let’s not wander far afield and get ourselves lost in words. Our neighbours are right here and their needs are before our eyes. Let each of us do our best, not to learn who our neighbour supposedly is, but to actually help our neighbour. We feel good in ourselves when we feel our neighbours close to us. And the commandment is for us to love our neighbour as ourself, so that we may have eternal life.

It is interesting to note that this sermon was preached on 14 September, 1965. Readers will draw their own conclusions.