On 26 January, the Church celebrates and honors the sacred memory of the Blessed Xenofon and his family. Saint Xenofon, his wife Mary and their two sons, Arkadios and Ioannis, are a model of a holy family, very instructive, particularly in our own day and age. There is a general concern and anxiety that the institution of marriage and of the family is undergoing a serious crisis and all right thinking people are seeking ways to support this fundamental constituent of the body politic, the family. Examples such as the saints we celebrate today are particularly edifying for us Christians. In any case, this is precisely why we’re encouraged by the Church to read the Lives and Works of the saints. 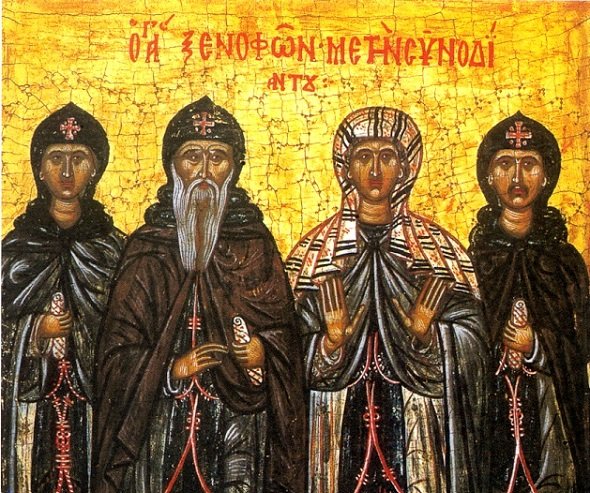 Saint Xenofon and his wife, Maria, were rich and devout Christians who lived in Constantinople during the reign of Emperor Justinian [527-565]. Not that piety always accompanies wealth, but Xenofon and Maria were good Christians and well-organized people. They had two sons, Arkadios and Ioannis, and made sure that they would be well set up in life, which is the concern and dream of all decent parents. So, in the first place, Xenofon and Maria brought up their children and set them on the path of God; they then made arrangements to provide them with all they’d need in life. It may be that we understand this concern better than in any other era, because now is a time when parents are very involved with the professional training of their children.

So, once Arkadios and Ioannis had completed their preliminary studies in Constantinople, their parents decided to send them to Beirut to study law, since they had the resources to do so. At the time, Beirut was one of the great centers of higher learning. The boys took their parents’ blessing and set off for the city where they’d find the best schools and teachers. Law was a prestigious subject and would ensure that they had a good career in the public service of the great Byzantine state. They were to travel by sea, but we must bear in mind what the ships were like at that time, because it will then come as no surprise that they were shipwrecked and Xenofon and Maria lost all trace of their sons.

It wasn’t simply that, in that era, any ship was in danger of being sunk, but also that the means of communication with which we’re familiar today didn’t exist, so it was very difficult to obtain information regarding the fate of the shipwrecked. Given that all trace of the young men had been lost, the parents had no way of finding out about them. So they set off from Constantinople for Syria and Palestine in the hope that they’d find their children. This was a very bold undertaking and one that seemed doomed to failure from the outset. But the Christian couple set out, because of love for their children, and with hope in God in their hearts. Nor were they disappointed, for what is impossible for us is possible for God and ‘hope does not make ashamed’.

After wandering about from place to place in search of their children, Xenofon and Maria reached Jerusalem. The holy city was a religious and cultural center, with magnificent churches built by Saint Helen and a good many small and large monasteries, in which outstanding monks and nuns lived the ascetic life. Led by God, the couple found their boys, Arkadios and Ioannis. But what did they find? Not two shipwrecked failures, wandering the streets in a wretched condition, but two young men clad in the monastic habit. The shipwreck turned out to be a success for the brothers on dry land: instead of studying in Beirut, they became monks in Jerusalem. It may be that at the time of the shipwreck, they made a pledge to devote themselves to God.

The manner in which the parents greeted their boys was worthy of the occasion. Were they sad at seeing them as monks? Did they want to take them away from the monastery and get them home. A lot of people react like this when they see their offspring in a monastery. As good Christians, however, Xenofon and Maria did something else: filled with joy at the discovery of the boys and full of gratitude to God, they themselves took the monastic habit. So Xenofon, Maria, Arkadios and Ioannis now made a new family, or rather made a unique monastic community. Sagacity and sanctity are the tradition of Orthodoxy. Amen.