Is there a difference between the Great Holy Water from the service on the Eve of Theophany and that from the day of the feast?

The Great Blessing of the Water which is performed on the eve of Theophany and on the day of the feast itself is exactly the same. Some people wrongly believe the service held on the eve is the ‘Lesser Blessing’ and that held on the feast itself is the ‘Greater’. In both instances, the Great Blessing of the Waters is performed.

The ‘Lesser Blessing’ is performed on the first day of every month, and also, exceptionally, when believers request it, for a variety of reasons (blessing houses, shops, institutes, the foundations of buildings and so on). The Great Blessing is performed only twice a year (on the 5th and 6th of January), in church. 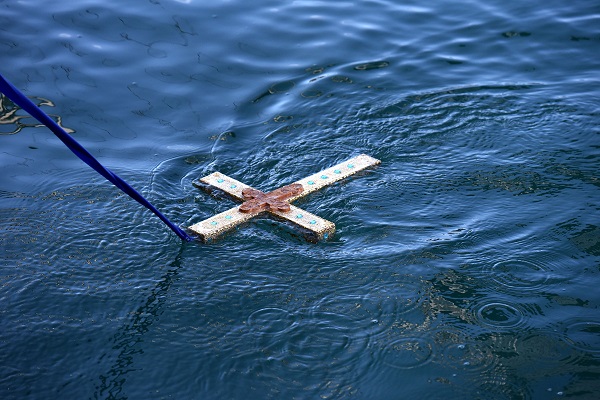 Where is Great Holy Water kept and for what reason?

Great Holy Water is kept throughout the year in church. This is not done without a reason, which is that it is ‘received’ by the faithful under certain conditions and circumstances. The most common is that the person concerned has been given a rule by their spiritual guide which prevents them from receiving holy communion for a time. Instead, they are given Great Holy Water as a blessing and comfort. There is no let or hindrance to this, provided, of course, they are in ‘repentance and confession’.

What must be understood, however, is that Great Holy Water is not a substitute or replacement for the Body and Blood of Christ, which they should prepare to receive as quickly as possible, having repented and been released from their sin.

Can Great Holy Water be kept at home and be drunk in times of sickness, to ward off the evil eye and any other Satanic action?

The answer is ‘Yes’. It is provided by the holy text of the service of the Great Blessing of the Waters, which states: ‘that all who are sprinkled with or consume it (the sanctified water) may have it for the healing of the passions, the blessing of homes, and every appropriate benefit’ and especially ‘for the destruction of demons, a shield against opposing forces’, (cf. the corresponding  prayer against the evil eye: ‘removing and expelling every diabolical action, every Satanic attack and every assault… and the evil eye of wicked people’).

It is indisputable that, in this way, the faithful are guided away from resorting to other solutions, such as spells, magic and similar ploys of the evil one. As conscious members of the Church, the repository of divine grace, and as recipients of its sanctifying measures, they instead have recourse to the authentic remedies of the Great and ‘Lesser’ Holy Water.

Naturally, it is a requirement that in the houses where Great Holy Water is kept, there will always be an icon-light burning, that the members of the family will be devout, and that anything which causes divine grace to depart will be avoided (such as blasphemous swearing and other abominations).

What is the relationship between fasting and Great Holy Water?

Historically, the Great Blessing of the Waters began as follows. In the early Church the eve of Theophany, like the eve of Easter and Pentecost was the time when the baptism of catechumens, the new Christians, took place. The blessing of the water and the baptism took place at the midnight service. Saint John Chrysostom tells us it then became the custom for Christians to take some of the sanctified water to drink or to carry back to their homes as a blessing to be kept for the whole year: ‘This is why, at midnight on the feast, when all have been doused with water, they take the water to their home, where they keep it for the whole year (Discourse on the holy baptism of the Savior, PG 49, 366). Later, however, at a time of liturgical decline, the service of the Blessing of the Waters was separated from that of Baptism, although it retained many of its features. The custom survived of taking the holy water home ‘to bless houses’, as the prayer of sanctification puts it in the service of the Great Blessing.

Another early development was the observance of a fast before the feast of Theophany, for two reasons. The first of these was that the great feasts of Christmas and Theophany were united in the ancient Church and celebrated on 6 January as Theophany or Epiphany (a practice still observed to this day in the Church of Armenia). It was John Chrysostom (4th century) who divided the feasts and ordained that Christmas be celebrated on 25 December and the Baptism and manifestation of the Holy Trinity on 6 January. There was a fast before every feast of the Lord for the spiritual and bodily cleansing of the faithful. We should remember that fasting has within it an element of mourning over sins. So when the feasts were split, the associated fast became linked to Christmas. This is why the Church has declared a one-day fast on the eve of Theophany, as preparation for the feast, rather than multiple days, since we are in the period of the Twelve Days.

Another ancient custom was that those who were to be baptized would fast, as did the godparents, relatives and other Christians who fasted ‘on behalf of the baptized’. So it was a small step for the drinking of the holy water to be linked in the minds of Christians with fasting, though there is, in fact, no causal relationship between them at all.

In today’s terms and conditions, we can say that those who regularly partake of the holy sacraments and observe the fasts of the Church, including that of January 5, are already in a position to drink the Great Holy Water on 5 and 6 January. Otherwise, they should observe a fast in accordance with whatever instructions they are given by their spiritual guide.

Finally, those who, in exceptional circumstances such as sickness, danger and so on, drink the Great Holy Water which they have kept in their home, having first fasted or not, should not fall short on spiritual fasting, but should avoid ‘everything that contaminates body and spirit, perfecting holiness out of reverence for God’ (2 Cor. 7, 1).