It’s an open secret that even the smallest amount of praise concerning any real or, more commonly, imagined gifts we may have is almost always the occasion for conceit and vanity. Imagine if we heard someone say to us: ‘You are the light of the world’. There would be no greater temptation for vanity, or the risk of brain damage.

Encouragement to vanity or to the struggle?

Quoting today’s Gospel reading, Saint John Chrysostom reads the words of Christ to his disciples and asks him: ‘What is this? You’re telling us to live a life at the forefront of attention, so that we’ll be honored?’. He then has Christ reply: ‘Not at all. I don’t mean anything of the sort. I didn’t say: “Make an exhibition of your achievements”; I said: “Let* your light shine”, which means strive to increase your virtue greatly. Light the flame of your heart fiercely and so be sure that your example is bright. Because when virtue is so lambent in a person, it can’t be hidden, even if they try to mask it in a myriad ways’. 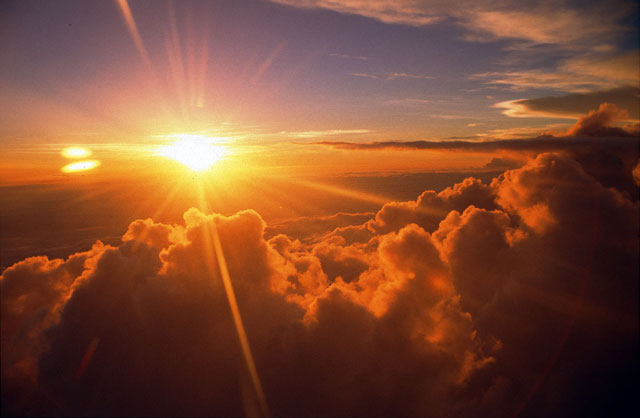 In other words, when, speaking first to the Apostles and then to us, Christ says : ‘You are the light of the world’, he’s not heaping praise but is giving us a command: ‘Pay attention. I gave you my light. The light is mine. I’m the source of light. But if it is to remain burning within you, that’s your responsibility; you have to work at it. You have to keep adding oil to the lamp of your heart by the firm practice of the virtues. The stronger my light burns in your life, the brighter your works will become, because of my gifts, and the less it will be possible for you to hide them, however much you- rightly- wish to go unnoticed. Seeing these works, people will take them as a reason to glorify your Father, who is in heaven, the only source of the true light and of every blessing’.

‘To you belongs praise…’

There are a good number of instances, when the force of the bright life of true Christians has brought others out of the darkness and into the light. Saint Pahomios the Great was the son of pagans but began to seek the light of Christ, drawn by the hospitable provision of food by the Christians of Egypt, when he was an army recruit. Or the loving greeting by Saint Makarios the Egyptian  (‘May you be saved, you bone-weary man’) to a pagan priest, which made the man ask not only to become Christian but even a monk. The light of Christ shines even through the slightest actions in the life of those who have truly become vessels of divine light.

This teaching on the light of the world is confirmed by Christ with two supreme truths: his own equality by nature with the heavenly father; and our own adoption by grace. Our heavenly Father  is the light of the world, just as his only-begotten Son is, since they are identical by nature. We take the light from Christ and can become children by grace of the Heavenly Father. If we then radiate his light towards others we become the occasion for them to glorify him.

The fulfilment of the Law

Christ uses these truths as the ideal platform to speak about a central theme: his relationship with the Law of Moses. In the first place, as being equal and consubstantial with his Father, he is equally the Lawgiver, the Master of the Law, just as his Father is. When he became a human person, then, it would not have been possible for him to do away with  the Law of Moses. He stresses twice, here, that he did not come to abolish it. And later, stopping the mouths of those who doubted him, he asked: ‘Who among you convicts me of sin?’ (Jn. 8, 46). Not only did he refrain from intervening in the Law, he came to fulfil it.

How did he fulfil the Law and the prophets? Efthymios Zigavinos, [a famous 12th century Byzantine commentator] says: ‘He fulfilled the prophets by fulfilling what they had prophesied about him. The Law, by, on the one hand, not breaking even one of its tenets; and, on the other, by adding to it what was lacking. Because although the Law hindered and condemned the results of sins, Christ attacked their principles and roots. Such as, for example, anger, which may lead to murder; or sly glances why can give rise to adultery’.

Christ said that many people would consider these new, supplementary commandments regarding the severance of the roots to be ‘minimal’, would disregard them and would encourage others to do the same. But such people will be considered the least in the kingdom of heaven. On the other hand, those who understand the importance of these commandments, who observe them and encourage others to do so will be glorified in the kingdom of heaven. They will be the true light of the world.

* A slightly more accurate translation would be ‘Make your light shine’, since the verb in Greek is in the imperative mood, that is, it is a direct command and therefore more forceful.