John the Baptist, the Lord’s Forerunner

The Mission of the Baptist

Through the texts of the Gospels, John is presented as the sole ‘prophet’ and ‘forerunner’ who was sent by God to prepare the people spiritually in view of the impending advent of the Messiah. Precisely this precursive capacity of John is given particular emphasis in the fourth Gospel: ‘There was a man sent from God whose name was John. He came as a witness to testify concerning that light, so that through him all might believe. He himself was not the light; he came as a witness to the light’ (Jn. 1, 6-8). Moreover, when he was later asked about himself, the Baptist himself said that he ‘was not the Messiah’, nor Elijah, nor ‘the Prophet’ whom the Jews were expecting to come into the world for exactly that purpose (cf. Deut.18, 15). John himself had the feeling that he was simply ‘the voice of one crying in the wilderness’, recalling through his words and sermons what the great prophets, Isaiah in particular, had had to say about him and his mission (cf. Is. 40, 3). 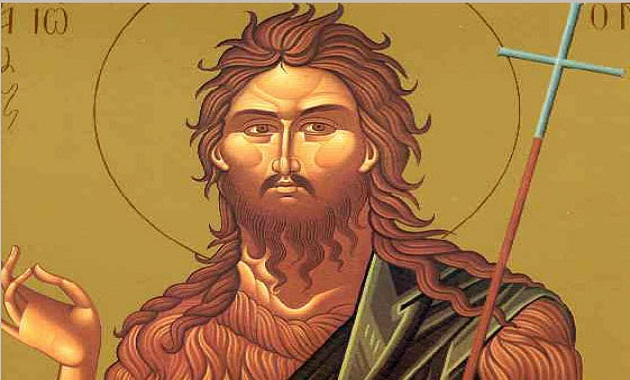 Jesus himself once said publicly, regarding the Baptist and his mission: ‘What did you go out into the wilderness to see? A reed swayed by the wind?  If not, what did you go out to see? A man dressed in fine clothes? No, those who wear fine clothes are in kings’ palaces. Then what did you go out to see? A prophet? Yes, I tell you, and more than a prophet. 10 This is the one about whom it is written: “I will send my messenger ahead of you, who will prepare your way before you”. Truly I tell you, among those born of women there has not risen anyone greater than John the Baptist’ (Matth. 11, 7-11).

The term ‘greatest’, does not, I believe, refer to the personal sanctity or the integrity of character of John, nor does it wish to demonstrate some sort of moral capacity, but is directly linked with his illustrious mission and his call to serve God’s eternal plan for our salvation. Seen from another angle, ‘the least in the kingdom of heaven is greater than him’ (Matth. 11, 11). John was the only person, from among all the great prophets of the past, to have the privilege of seeing the Messiah with the eyes of his body and of becoming the Lord’s Forerunner and Baptist. So from this point of view, John was certainly the ‘greatest of the prophets’, even though the ‘least’ in the kingdom would be ‘greater than him’.

From this perspective, John can be understood as a unique prophet and also as being ‘pivotal’, in the sense that, by his presence, he distinguishes the world of the Old Testament from that of the New, yet also links them. In other words, he links prophetic ‘knowledge’ with historical experience, the expectancy of the past with the fulfilment of the present. In John and with John there occurs the great transition from the old to the new, from the before to the now. John is the ‘greatest’ of the old order, but the ‘least’ in the new.

In John’s personal history we see for the first time- and so intensely- the inner drama of a spiritual person. John gave us an ‘image’ and a ‘model’ of this drama. In a dramatic manner, his life revealed the need for a progression from simple human and historical knowledge ‘about Jesus’ to the recognition of him as ‘Christ and Lord’. For John, this meant acceptance and recognition that Jesus from Nazareth in Galilee was ‘the son of Mary’, and also, at the same time, the ‘Son of God’.